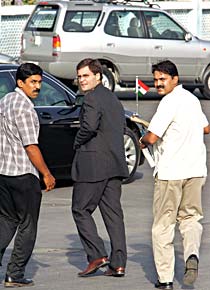 
NINETY YEARS separate Motilal Nehru’s ascension to the post of Congress President in 1919 from Rahul Gandhi’s emergence as the voice of the party. But inheriting a legacy and crafting an image are two different things. The second matters far more in understanding Rahul Gandhi. The legacy has been thrust upon him, the image is what he is working to create. This is why his first press conference in New Delhi was revelatory. On the evidence so far, this heir to a dynasty, like the young anywhere, seems to be better at waging war than making peace.

Clearly, the choice of Delhi as the venue for the press conference and his willingness to field all questions thrown at him spoke of a new confidence. Till this Lok Sabha election, he had been careful to address select media in carefully controlled environments far from the capital. This, however, was an occasion that he had to think on his feet and provide unscripted answers to untutored questions. In the end, he came across as someone who understands his party and the issues this country faces, yet seems strangely out of touch with the larger political environment he is operating in.

Indeed, what he said and how he said it would not have sat badly on his forebears—yes, even on Jawaharlal Nehru. Except that Nehru always had more than 300 Congress MPs in the Lok Sabha backing him, while Rahul will count himself very lucky if he can muster little more than half that number.

The challenge before him is the challenge that any latter-day heir to an empire faces. After five generations of control over the party, the Centre is fraying and regional satraps have emerged as powerbrokers outside the party fold. The choice that Rahul Gandhi faces, really, is the one that emerges over long spans of time in every empire—consolidate his authority or make peace with satraps. Several empires have collapsed in attempts to restore an order that can no longer be maintained in changed times.

Whatever he does, powerful regional satraps will determine the shape not just of the next government, but of any government in the foreseeable future. In referring to these satraps during the press conference, Rahul Gandhi’s tone ranged from the presumptuous to the dismissive. Asked about the Left, he said, “I do say the Left has old ideas… they have to accept the world has changed. They will be forced to change.”

On government formation, he even spoke on their behalf: “I am confident that the Left will support Manmohan Singh.” These sentiments didn’t win the approval of the Left. What they did provoke was a stinging rebuttal from his ally In West Bengal, Mamata Banerjee: “If the Congress joins hands with the CPM or the Left after the polls, we cannot continue to be with them [Congress].”

The Left, Mamata Banerjee and Sharad Pawar are in all likelihood the people he or his partymen will have to sit with while forging the shape of the next government. Yet, in the same conference, referring to Sharad Pawar, he was almost dismissive: “If NCP becomes the biggest party in India, then that option [Pawar as PM] is open.”

Rahul Gandhi has displayed a similar impatience with satraps all through his career. In a 2004 interview to Tehelka (incidentally, he didn’t disown the greater part of that interview), he had once said, “There is no functioning government in UP and Bihar, and so there is no governance. There is a total collapse of the administrative system in these states.” This, at a time when his party was backing both Lalu Prasad (in Bihar) and Mulayam Singh Yadav (in UP). Asked about support for the latter, he added, “That cannot go on. I don’t support that [the UP government] at all.”

His words embarrassed the Congress then, and though five years have passed since, he seems no wiser now. At the time, Rahul Gandhi was just an MP. Four years later, after the Left withdrew its support of the UPA government at the Centre, he was a general secretary of a party that needed the same Mulayam Singh Yadav’s support. Nearly every other senior leader of the party was involved in the ensuing negotiations.

Rahul Gandhi was nowhere on the scene. Officially, he was on holiday.

There are enough senior Congressmen who have expressed the worry that the party is not paving the ground for what follows after the election. One such, once associated with the Third Front and now no longer in favour, points out that after the 2004 election the Left and Congress were pushed by the threat of an NDA return to power towards formulating a common agenda for governance. This time around, this perceived threat has receded significantly.

Rahul’s men have made no secret of the party’s decision to sit in opposition rather than support a Third Front government. Is this a bluff? Rahul Gandhi may talk of using this time to strengthen the party, but he is also a leader aspiring to lead a nation. What may be good for the party is not necessarily good for the nation. A ragtag coalition that lasts less than a year is to no one’s advantage. If, as seems likely, the Congress emerges as the single largest party, it will have to work on government formation. In other words, the party will need the very people whom Rahul Gandhi has been so dismissive of.

So far, he has become increasingly comfortable with the prospect of leadership within a party where his voice goes unchallenged. The real test lies in dealing with those who do not take his authority for granted. It is true that negotiations start from maximal positions and work their way down, but at the very least, they require sitting across a table and talking. It just may be possible that a few weeks from now, when the numbers are in, the country will watch a helpless repeat of what happened once the Left walked away from the Manmohan Singh government last year. Can Rahul Gandhi afford to be on vacation then?