What is it that makes VS Achuthanandan, Kerala’s most youthful politician at 92, the most popular Indian communist? Open  catches up with the relentless fighter as he prepares for another battle 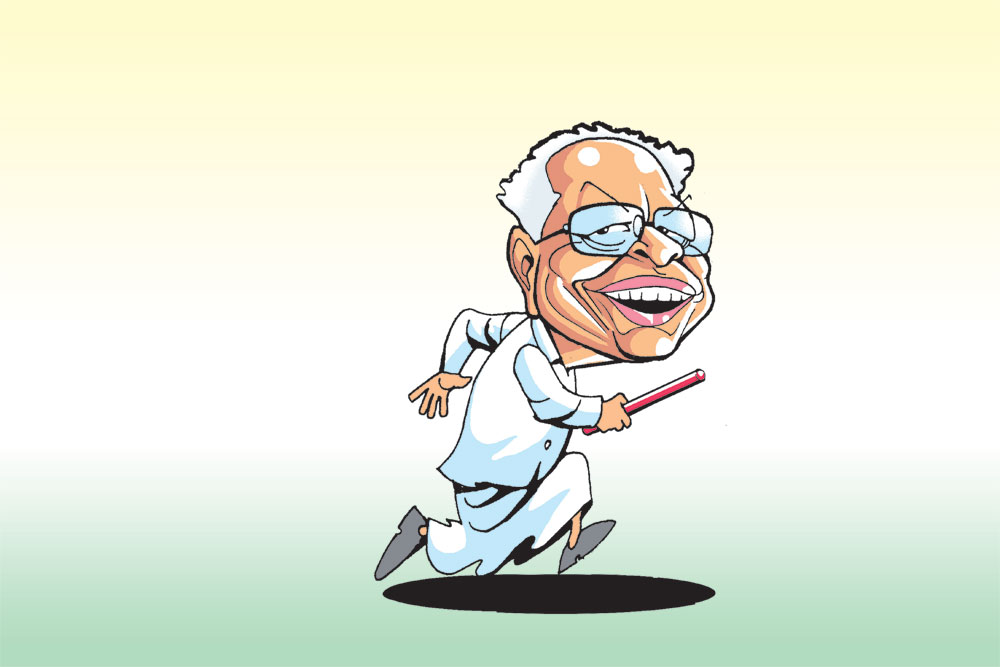 EVERY FIVE YEARS, unfailingly in the month of March, VS Achuthanandan wades through the muck of machinations, outsmarting enemies within his own party to become the face of Communist Party of India (CPM) for state elections. A decade ago, on 15 March 2006, the party’s Politburo decided not to field him. Fierce protests followed across the state and even t-shirts with his image hit the market. Two days later, seven of the fourteen district committees passed resolutions demanding his candidature. On 21 March, the Politburo reviewed its decision and decided to fight the battle under his leadership. Achuthanandan went on to become chief minister after the election. Then, five years later, on 16 March 2011, the party’s state secretariat decided against his candidature for the Assembly election. The next day, there were isolated protests which were not as intense as 2006. But the Politburo did not wait for it to gather momentum. It turned down the state unit’s decision and declared Achuthanandan a candidate.

This March has been somewhat different. Even though the formal announcement of his candidature is yet to come, no hurdles are expected because the Politburo is headed by Sitaram Yechury. Yechury is a known supporter of Achuthanandan since the beginning of his battle against Pinarayi Vijayan over control of the party in the state, with Vijayan always having more organisational support. The number of district committees supporting Achuthanandan is fewer now but when it comes to popular appeal, there is no one who comes anywhere close. On 10 March, the Politburo reportedly gave its nod to both Achuthanandan and Vijayan’s candidature, pre-empting any on- and off-screen political intrigues. A party source revealed that Yechury silenced any objections in the state committee against fielding Achuthanandan and fenced that debate off.

At his home in Alappuzha, our meeting with Achuthanandan is brief. He refuses to answer any questions regarding his candidature but his body language is telling. Though he won’t confirm it orally, the bright smile and the glittering eyes with which he reacts to the question is suggestive—at 92, he is all set to go to the battlefield again, the sixth time in a legendary political life that commenced in 1938 at the age of 18 as a trade union activist. “We will win with a thumping majority,” says Achuthanandan. “People of Kerala are badly in need of a change. They are fed up with the Oommen Chandy government. There is corruption at all levels. The government is doing nothing to regulate the price hike. They are completely immersed in money making. The solar scam (in which Chief Minister Chandy is implicated) is an ugly manifestation of corruption. There is no government in function at all.” He gets up, avoiding potential further questions on his own party opponents. “Have to go, I am a bit busy,” he says, moving out of the room into a car.

In Kerala, Achuthanandan is an exception to the cynicism with which voters look at political leaders. The recently held labour strike by women in Munnar is an example. All politicians, both from the right and left who went there, were chased away with brooms but he was received warmly. He is acceptable even to those who argue that the youth should take over the political leadership. In a cadre-based party like the CPM, speaking against the party line is a cardinal sin but Achuthanandan manages to do it often against his rivals. The reason why he gets away with it is because the party knows the people of Kerala trust him more than they trust the CPM.

Neither the opposition nor his own party rivals could capitalise on allegations of corruption against Achuthanandan for undue favours allegedly shown to his son Arunkumar while he was chief minister. He immediately welcomed a CBI enquiry and the allegations only turned popular sentiment in his favour. In stark contrast were the corruption allegations against Vijayan in the SNC Lavalin case. It has chased him over a decade and corroded his public image even though he was discharged later.

His party has tried often to discipline Achuthanandan but could never pursue it beyond a point, scared of how the public would react. Achuthanandan’s reinvention as a politician transcending his own party can be traced to the 1994 Assembly polls in Mararikkulam constituency. The LDF won that election but he lost, defeated by his own partymen. He had been at loggerheads with the Centre of Indian Trade Unions (CITU) faction which engineered his defeat. It propelled him into the mode of a lone fighter and Achuthanandan had his revenge in 1998 when at the state conference held in Palakkad, three CITU leaders MM Lawrence, KN Raveendranath and Appukkuttan Vallikkunnu, the then associate editor at the party organ Deshabhimani, were removed from the state committee. Ironically, Vijayan was then his first lieutenant in this battle. Later on, they became the two opposite poles, starting an era of malignant infighting in the party.

Speaking against the party line is a cardinal sin but Achuthanandan manages to do it often against his rivals,
because the party knows the people trust him more than they trust the CPM

Achuthanandan has assiduously cultivated the image of a crusader aligned to people’s movements. He highlighted the case against former UDF minister and Kerala Congress leader R Balakrishna Pillai that finally put Pillai in prison. He did this alone, unsupported by his own party (Pillai is ironically in the Left camp now). The Palmolein import scam in which former chief minister and Congress leader, the late K Karunakaran was an accused, is another long battle led by Achuthanandan which is still to get closure.

It was as Opposition leader during the 2001-2006 tenure of the UDF Government that his popularity shot up. He personally walked to the top of steep hills and interior forests to catch encroachers red-handed. While his party became increasingly mechanical and impersonal, Achuthanandan built a direct bridge with people, focusing on issues which touched them—environment, Dalit, tribal and women’s rights, listening to the victims of sexual harassment and those displaced by development.

He also knew how to work the media, with his media managers feeding reporters titillating pieces of inside information on party secrets. In 2013, three of his personal staff—including his press secretary—were ousted by the Politburo for leaking information to the press. Once again in sharp contrast, Pinarayi Vijayan made the media hostile by coming across as aloof and accusing a syndicate of trying to finish the communist party in Kerala. The media portrayal of Vijayan has only worsened in recent times.

In 2007, a year after he became chief minister, Achuthanandan ordered an eviction drive in Munnar, probably the most famous a tourist spot in Kerala. Millions watched the demolition of illegal structures on encroached land as it was aired live by television channels. While ‘Operation Munnar’ did not end well with the drive losing steam, it was portrayed as the failure of the party and not the chief minister. He went onto other causes such as reclaiming paddy land, promotion of open software, signing an MoU for the Smart City dream project and setting up of cyber parks. When the elections happened in 2011, his popularity managed to mitigate the anti-incumbency factor. The Left lost but very narrowly with the UDF getting 72 seats, just one more than the required majority.

LIFE STARTED AS a struggle for Achuthanandan. He lost his mother in early childhood, and his father at the age of 11. When he was 12, he dropped out of school to work in a coir factory. He got into politics by organising workers. Even now, at this age, the energy is unflagging.

Achuthanandan gets up 4 in the morning, does yoga for an hour and then goes for a brisk walk for another hour. Breakfast is limited to two idlis and sambhar; lunch is less than a cup of rice with vegetables in abundance, strictly organic, grown in his Cantonment house compound. Fish is a luxury only when he comes to his home in Alappuzha. He then has a glass of buttermilk mixed with some medicinal leaves at 11 am. The interval between breakfast and lunch is spent on books and newspapers, if there are no public programmes. There is a mandatory hour of sleep after lunch. In the evening, he does one more round of brisk walking.

“His lifestyle is amazing,” says KV Sudhakaran, a senior journalist in Deshabhimani and press secretary to Achuthanandan. At the age of 56, Sudhakaran finds it difficult to keep up with his boss. “I am not sure whether I will be alive to see him completing another tenure in Cabinet,” he smiles.

A source talks of an interesting anecdote that reveals how Achuthanandan views his own longevity. In the recently held state committee meeting, as Sitaram Yechury was speaking for Achuthanandan’s candidature, “Though Comrade Achuthanandan is 94, he is very energetic and…”

Suddenly there was an interruption.