Rahul Gandhi’s original aim, as he once said, was simply to visit the homes of the poor, regardless of caste. The poorest huts only happened to be Dalit. 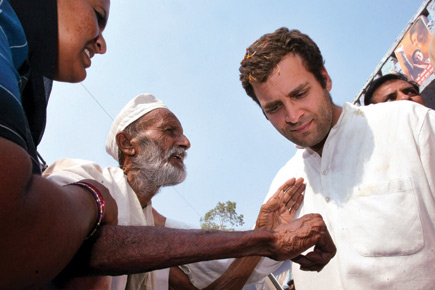 His aim, he said, was simply to visit the homes of the poor. The poorest huts only happened to be Dalit.

A day after Mayawati’s visit, Rahul meets the family of five Dalits killed by dacoits in village Aminabad in Etawah.

Rahul Gandhi makes a speech in parliament in favour of the nuclear deal. Speaking at the trust vote on Manmohan Singh’s first government, Rahul narrates the tale of Kalavati, a Dalit widow from Yavatmal in Vidarbha. “Energy,” he says, “affects India’s growth. And energy allows us to grow at 9 per cent and that growth is responsible for allowing us to help the poor and make programmes for the poor like (Kalavati)”.

Rahul ferries British foreign secretary David Miliband along to a Dalit settlement in his parliamentary constituency, Amethi. The two spent the night at the house of Dalit couple Shiv Kumari and Karma, in Semra village in Bhetua block.

On a surprise trip to UP, Rahul visits Ram Nagar in Barabanki district, and then drives off to Sharavasti district to spend the night in the house of a Dalit Chedda Passi in Rampu-Deogan village. The next morning, Gandhi bathes out in the open, drawing water from a hand pump, and mingles with the villagers, asking them about their problems.

“I see myself going to a human being’s house. I do not see it as a Dalit or an upper caste or a lower caste house. As far as I am concerned, i am going to a poor man’s house, whether Dalit or minority,” Rahul tells a scribe at a press conference. “For me, the only difference I see between a poor person and rich person is that of opportunity”.

“The media talks only about my visits to the houses of Dalits and chooses to ignore the other places where I go,” the Congress General secretary tells reporters at a press conference on the second day of a two-day visit to MP.