Turning the Wheel on Gujarat 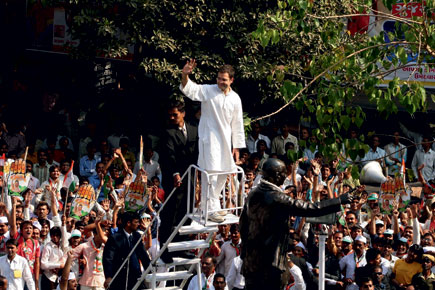 
Most of us are bigots. I certainly am one.

We can, however, be forced to examine our actions and our thinking externally, through an intervention.

Mine came in an epiphany about 20 years ago. I have told this story before, but it’s worth telling again.

On Monday morning, 7 December 1992, I telephoned my father from our little shop in Surat’s textile market area. I told him the market was deserted and nobody seemed to be showing up. Could I lock up and return home? Father, always suspicious, grumbled that I could wait. Soon after, he called back and asked me to return immediately.

My bike was stopped once on my way back. I was asked my name, told not to return that way. By the time I was home, thin columns of brown and grey smoke could be seen rising over the Surat skyline from our flat. Around us, Muslims were being punished for having their mosque pulled down.

On Wednesday morning, Shaheen aapa, our neighbour from the floor above, came down with an ancient gun in her hand, and her two little daughters by her side. She was pregnant with her third daughter, the last child she would have with Kadir Pirzada, the Congressman who was once the youngest mayor of Surat. “Will you protect us?” she asked, and handed me the gun and two cartridges. I looked at my mother, who came out of the kitchen and asked me to go. I walked up to the Pirzadas’ flat and sat on the steps outside the door, gun in my lap, terrified. I was a few days short of 23 and had never held a rifle (or shotgun, I cannot say what it was) till that day, and haven’t held one after that. In the middle of that riot, leaving his family alone in a Hindu neighbourhood, Kadir Pirzada had gone off to calm the city. He returned in the afternoon and was surprised, and I think alarmed, to see that the gun had been taken out. He took it from me, had a meal and went off again.

I left Surat soon after, but that afternoon my prejudice against Muslims ebbed a little. Since then, every time I have felt it surge, switch off my thoughts and take over my emotions, I have been shamed by the memory of that day, and the dignity of that family upstairs.

In the years after, I would sometimes see a mention of Kadirbhai in the news. Once, taking charge of Ganesh visarjan in the Tapi, being interviewed on television and reassuring Hindus of the arrangements for drinking water, safe immersion and lifeguards. Another time, I read in The Indian Express of a fatwa passed against him by maulvis because he was the chief guest at a Navratri celebration and had stood at the aarti. After the riots of 2002, Narendra Modi told Rediff.com how the Congress was threatening to act against Pirzada because he had organised a group of 15,000 Muslims to beg for peace with Modi at a function. They were being butchered; what did the Congress expect him to do? Hit back?

A few days ago, newspapers said he had been reported to the Election Commission for making a communal speech.

On 8 November, Kadirbhai telephoned me from Delhi. He assumed I had read about his latest problem, and I had. “I’ve met the Election Commission and got a stay,” was all he said. I wish all Indians could know about this man, but I suspect even the Congress leadership doesn’t know what he is made of.

Three of the four were Gujaratis. This is because the outstanding quality of India’s mercantile classes is pragmatism and compromise. These are essential to great leadership in a nation of such diversity.

They line up to applaud a man whose record as his state’s home minister is the worst in Indian history. The record cannot be disputed. Forget the riots: no Chief Minister before Modi has had a minister in his cabinet convicted for mass-murder of women and children. None has had his deputy home minister charged for criminal offences. No other state’s anti-terrorism chief is in jail for blackmail and murder. No other state persecutes IPS officers for stopping civic violence. But all this is fine with Gujaratis.

Armed with this reassurance that his manner is popular, Narendra Modi now addresses his national ambition. He is, however, insecure and paranoid, in the manner of all tyrants. I say this without prejudice, and with personal knowledge of the man and his writing. His decapitation of the top rung of Gujarat’s BJP, his appropriation of all critical ministries makes this clear. The caste-based leaders who built the party in the state have been thrown out. Not because they became secular or gave up Hindutva, but because Modi insists on what armies call ‘unity of command’.

The damage he has caused his party will show once he has played out his innings, mark these words.

Under him, in four elections, two Assembly and two Lok Sabha, the BJP has given no tickets to Muslims. They are 10 per cent of the population, but have been shown their place by Modi. He doesn’t need them, and he informs them of this repeatedly through this cruelty. Gujaratis are fine with this, too. This is what Hindutva actually means when it says no more pseudo-secularism. No more pleasing Muslims. What it means is no more Muslims.

Such unremitting hatred is abnormal, but it will dissipate in the right conditions.

Accepted, the Congress is corrupt, nepotistic and dynastic, but its language is not divisive. One term in power for the Congress will be enough to heal the damage in the neighbourhoods that Gujaratis and their media ignore, and the rest of the nation doesn’t know about.

The Congress has only two people with the charisma to effectively deliver the message of inclusion: the daughter and son of Rajiv Gandhi. Rahul would have better served the party in approaching Uttar Pradesh after he had cleaned it up in two critical states—Gujarat and Karnataka.

There is no doubt he would have got more purchase for his effort on the ground. He can still do this.

Gujarat has become a BJP-minded state, but more than a third of the population still votes Congress.

Rahul Gandhi would be doing what Gandhi and Nehru would have done. Plant himself in Gujarat and force us to look at ourselves.

Gujarat is a pragmatic society and will listen to the logic of benefit. This stupidity of Gujaratis, their long and hateful sulk against secularism and Muslims, will not redound to their benefit. They need to know this. No good will ultimately come from this triumphalist subjugation of one part of their society.

Bigotry is not the natural state of civilised man. Someone needs to explain this to Gujaratis with love and patience.