Train to the Future

In Sasaram, Bihar, hundreds of students band together to nurture their dream of cracking government entrance examinations—on a railway platform 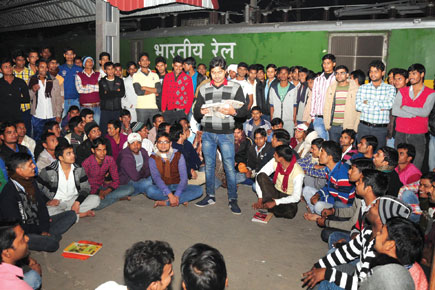 On a winter evening, Sasaram looks like any other mofussil town in north India. Smoke from diesel vehicles hangs like a curtain, thanks to heavy traffic on the famous Grand Trunk Road that runs through the town. A new bypass road has been built, but truckers prefer the old toll-free road. Incidentally, Sher Shah Suri, the Pathan ruler who built the precursor to the modern GT Road, was from Sasaram and rests in a tomb 1 km away from its busiest intersection.

We are here in this town, 160 km south- west of Patna, to meet an extraordinary group of young men aspiring to perfectly ordinary jobs. Wading through the sea of shawl-masked faces at Sasaram Railway Station overlooking GT Road, we walk past the single-storey railway quarters to platform No 1. Located on the Kolkata- New Delhi route, Sasaram is one of the busiest railway stations in Bihar. Yet, the far end of the platform is deserted. This kind of place seems capable of breeding criminals perhaps; it certainly doesn’t look like a nursery of ambition. We wait, to be proved wrong. Sanjay Chaurasia, a paanwala, looks at his watch and assures us, “Time ho chala hai. Aate hi honge” (It is time. They must be on their way).

As the sky begins to darken, a few young men make their way to this part of the station. They shiver in the wind and huddle close for warmth. Hemmed in by hills on either side, Sasaram sees unforgivingly cold winters and aridly hot summers. But the group on the platform is only swelling. In no time, over 500 students have assembled here. They form multiple circles and begin their session, armed with notebooks and pens. The largest group, of almost 300, has a few boys sitting on the platform with others standing behind them. Kunj Bihari, 21, is the first to read out from his notebook: “Jamia Millia Islamia ki sthapna kisne ki? (Who established Jamia Millia Islamia?)” The others respond in chorus: Zakir Hussain. Bihari moves on to the next question: “Shovana Narayan kis nrityakala se sambandhit hain? (Which dance form is Shovana Narayan associated with?)” Kathak, comes the reply. A few more questions, and another student takes charge as quiz master. It is about 5 pm. Absorbed in their session, the students ignore everything else around. They will keep at it till about 8, stopping only for the occasional train to pass.

They are all hoping to crack competitive exams for government jobs, mostly of grades three and four. “This is winter, so we wrap up early,” says Kunj Bihari. “In summer, some of us stay here through the night and study.” He hails from the neighbouring Bhabua district and has been a regular here for the past two years. It is beneficial to study in a group, he says. He is yet to take his first entrance test—for Railways jobs. “The seniors here suggested that I am now ready to appear for any grade three government exam,” he says. The seniors are those who have either cleared some entrance tests or could do so. Anupam Kumar, 25, a graduate from the nearby Kaimur district, is one such. He moved to Sasaram four years ago along with his friend Kapil Kumar. Both Anupam and Kapil have cleared the written test for Group D jobs in the Railways. Kapil is waiting for his final call while Anupam couldn’t make it to the merit list despite doing well. “Next time I will crack it for sure,” he says. They live together and share a room in Sasaram just to be part of this study group at the railway station. They have witnessed more than 100 selections over four years. “The boys who get selected stop coming and new boys join every year,” says Anupam.

This is the story of one study group. There are more than ten such groups, large and small, that gather at the railway station. On average, around 100 students from this town get picked for government jobs every year. “Every month, there are more than 20 boys who distribute sweets,” says Kapil.

In Sasaram, these aspirations are an open secret. No one knows when it all started, but it has been over ten years. “When I was in school, I sometimes came here,” says 30-year-old Ratan Kumar Vishwakarma. “Even back then, there were students who studied in groups, though the number was not as large as it is today.” The story goes that one summer, due to frequent power outages in Sasaram, some young men decided to study at the railway station. The idea has become so popular that a large number of students from nearby areas move to Sasaram every year to be a part of it. This has had a positive impact on the local economy. New coaching centres have sprouted, room rents have gone up and real estate prices are inching closer to those in Patna. “There is a shortage of rooms for rent here,” says Sanjay Singh, who has a house in Sasaram. “Earlier there were hardly any tenants. Now an 8 by 8 foot room is available for Rs 1,500 per month, which is close to what you would pay in Patna.” Besides letting out rooms to students, Singh has also opened a books- and-stationery store on the ground floor.

Sasaram in central Bihar is largely dependent on agriculture for survival. Fertile land and a strong canal irrigation system have earned the region a reputation as the grain bowl of the state. Rice grown here is sold in Kolkata and New Delhi. But in the mid-90s, Naxalism and caste battles hampered agriculture in the region and set off a wave of large-scale migration, especially of the youth. Over the past decade or so, while peace has returned, farmers have continued to struggle to make ends meet. Youth are now encouraged not to farm, but to snag a government job, which is seen as the most respectable form of livelihood. “Anyone who gets a government job commands respect in society,” says Ajay Kumar from Nokha. He has just cleared an examination that will secure him a job as a clerk in the Central Government. “The moment the news spread, marriage proposals started pouring in,” he says. One selection from a village is enough to inspire hundreds of students to start preparing for entrance exams. Partly as a result, literacy in Sasaram has risen from 75 per cent in 2001 to 82.3 per cent in 2011, by the latest census. It is now among the top ten most literate cities of Bihar.

Students who come to Sasaram to study usually hail from farming families. “We don’t have the resources to pursue engineering or medicine,” says Deepak Tiwari, who comes from the Natwar region. “Our families are somehow supporting our cost of staying in Sasaram.” Twenty-three-year-old Rajesh Kumar Paswan’s father works as a farm labourer. The eldest of three siblings, Rajesh came to Sasaram five years ago from his village in Chenari. His father, who’d had all his children educated, initially supported him. But as the expenses began to mount, Rajesh had to start taking private tuitions to add to the family’s income. He has been selected for a Group D job in the Railways, but he is holding out for something better.

Back at the railway station, over 5,000 general knowledge questions are discussed for the day and mistakes fixed. In the course of the session, some senior members of the group collect Rs 3 from each student. The money will be used to photocopy a mock test paper that is being prepared by five students sitting some distance away from the main group. At 5 am the next morning, the group will gather again to solve the paper. The sheets will be collected and examined, and the students ranked. The top ten scorers will be rewarded with prizes: a pen, a notebook or a diary. That evening, five of these toppers will be in charge of setting questions for the next day’s exercise. Some of them bring real question papers of entrance tests they had appeared for. Nageshwar Kumar, 26, appeared for the Group D Railways exam at Jabalpur. The results are not out yet, but the group knows he is sure to have passed. “We know what the cut-off marks for selection would be,” says Anupam. “He has done much better than that.”

The students do not have to buy platform tickets, thanks to the support of railway officials. “In fact, they are the reason bad elements don’t linger here,” says station manager Bablu Kumar Rajak, who recently installed a large LED light at the platform. In summers, he makes sure that the fans are in working condition. “They are using the premises to make a career for themselves,” he says, “We will always encourage them.”

“Ever since the Modi Government has come to power at the Centre, not a single Railways job has been announced. When you go back to Delhi, please ask him to announce vacancies,” a student tells us. As the group prepares to leave, a goods train speeds past, making everyone go quiet. It shot past like a bullet, someone comments, prompting a question: “Where will the first bullet train in India ply?” From Mumbai to Ahmedabad, the crowd answers, laughing. The agreement was signed this afternoon. The ‘station waale ladke’, as they are called, have left for the day. But they will be back at dawn.