The Victor and the Spoils

The JDS shadow over the Congress’ Karnataka win made the party High Command partial to Siddaramaiah, but sources say the new CM was imposed, not elected 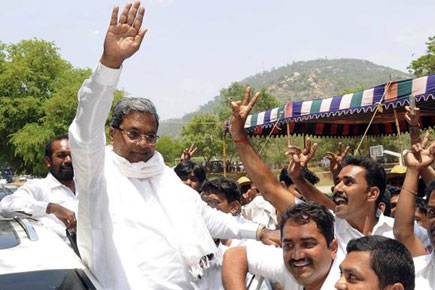 The JDS shadow over the Congress’ Karnataka win made the party High Command partial to Siddaramaiah, but sources say the new CM was imposed, not elected


BANGALORE ~ Fear of a resurgent Janata Dal-Secular has led the Congress High Command to nominate Siddaramaiah as Karnataka Chief Minister. The JDS—to which Siddaramaiah belonged before his move to the Congress in 2006—did exceptionally well in the recent polls, giving the BJP tough competition for second place.

With Lok Sabha polls less than a year away and the Congress looking to Karnataka to deliver numbers, the party leadership might have felt Siddaramaiah was the one to take on the JDS, led by former Prime Minister HD Deve Gowda and family, in the old Mysore region where the Congress is weak.

A two-time Deputy CM and Gowda’s former blue-eyed boy, Siddaramaiah has scores to settle with the party that mentored him. He was Deputy CM from 1996-99 when the unified Janata Dal was in power, and again in 2004-05 when Dharam Singh was CM, with the JDS as a coalition partner. Differences between him and Gowda came to a head during Singh’s term. Gowda worked behind the scenes to remove Siddaramaiah, who joined the Congress the next year.

Siddaramaiah, who took the CM’s oath on 13 May, has begun his term with a move to endear dairy farmers. The hike in incentives he announced—from Rs 2 to Rs 4 per litre—was a pointed attempt to make inroads into JDS territory. The state’s dairy farmers traditionally support the JDS, whose leader HD Revanna, Gowda’s older son, has lorded over the Karnataka Milk Federation since the early 1990s.

In another early move, the new CM asked officials to come up with an excise policy to ensure cheap liquor for the working class, the cost of whose daily peg rocketed in 2007, when the government of HD Kumaraswamy (another of Gowda’s sons) banned arrack, a cheap alternative to Indian Made Foreign Liquor brewed and sold by the government. After the ban, IMFL sales increased, but so did the burden on the consumer. The large constituency of tipplers nursing a grudge against the JDS and BJP should be grateful to the new CM. Siddaramaiah is also making an effort to please Congress colleagues who treat him like an outsider. Within an hour of taking oath, the 64-year-old rolled out sops worth Rs 4,409 crore, including massive loan waivers. He took care to spread the waivers across communities, pacifying Scheduled Caste anger by waiving loans for them, as well as Scheduled Tribes, Backward Classes and minorities. SCs are peeved that Siddaramaiah, instead of Union Minister Mallikarjun Kharge, was made CM.

His seven years with the Congress have been tense, to say the least. He was made leader of the Congress Legislative Party leader and of the opposition during the BJP’s term, but twice threatened to resign, alleging he was not given a free hand. His sulking led Sonia Gandhi to promise him he would be made CM. Although, some credit is due to Siddaramaiah for galvanising a Congress beaten into submission by the BJP with a padyatra to Bellary to expose the misdeeds of the Reddy brothers two years ago.

Siddaramaiah had continued to sulk till mere weeks before the polling. The general perception in the party was that he, a relative newcomer given to tempers, would not be given the top job, and that Kharge would be rewarded. Even after the results came in, the Kharge camp, which got more numbers, worked silently in anticipation. But the uncounted ‘secret ballot’ and sudden announcement has left many bitter.

According to Congress sources, the party’s claim that Siddaramaiah was democratically ‘elected’ with a ‘majority’ is completely untrue. “The truth is that no such election took place. As soon as the 121 newly elected MLAs trooped into the Karnataka Pradesh Congress Committee office on Queen’s Road, the four [AICC] observers led by Union Defence Minister AK Antony announced that the High Command had chosen Siddaramaiah as CLP leader. Three resolutions were immediately moved—one thanking the people of Karnataka, another thanking party workers, and a third authorising the party High Command to name the CM,” an MLA says on condition of anonymity.

“As soon as this exercise was over, Antonyji started insisting that the MLAs would elect the CM by a secret ballot. Some MLAs objected to it, as a resolution had been passed that the High Command would name the CM. In the din that followed, the observers, who seemed to be well prepared, handed out slips of paper with serial numbers and insisted that every MLA write a name and drop the ballot in the box. After the voting took place, some phone calls were exchanged and Antonyji suddenly announced that Siddaramaiah had been elected the next CM by virtue of a majority of votes. The MLAs were shocked as the ballot box was never opened and votes never counted,’’ says another MLA who was present.

At that juncture, Kharge, KPCC chief G Parameshwar, senior leaders and others who had thrown their hat in the ring were left shocked. This had been the third time the post of CM eluded Kharge.

The opposition expects such behind-the-scenes activity to weaken the Congress. It suspects that Siddaramaiah may not be able to take his party colleagues along. It is up to Siddaramaiah to be assertive, keep a check on his temper, and keep the CLP together. The people of the state expect good governance, not just posturing.