The Sting Operator Who Gave Up Anonymity

The multiple exploits of Nagvenkar, the journalist who exposed Goa’s paid news racket, pulled off a prank by planting a fake Nazi story in several well-read dailies, and has held up a mirror to the media in other ways 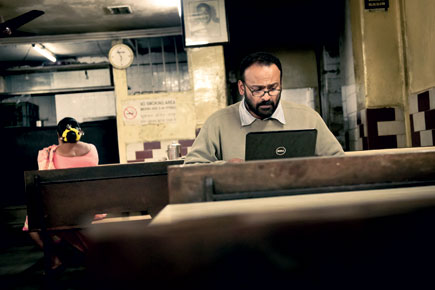 
The ambience at Clube Nacional is perfect, and one immediately envisions the film version of this story: lone journalist, snubbed by (many of) his peers for his collegial exposés, sits at a table in a dimly-lit tavern, sipping his glass of milky feni. He stares out the second storey window, past the oldest building in Panaji, to where the Mandovi river twinkles in the rainbow lights of yachts and stars. Below, the streets of this business quarter are quiet. Most people have gone home by now, certainly all the women and children; dogs are looking for dinner in the gutters. The man, slightly burly in a plain sweater, is reading a piece of paper. Is it a document proving his claims of corruption against one of Goa’s premier daily newspapers? Is it a copy of the criminal defamation suit filed against him last week? Just then, the proprietor comes over, looking like the Portuguese have never left, and puts a plate of Chicken Cafreal and hot fresh pao on the table. “I saw you on TV, man,” he tells the journalist, whose name is Mayabhushan Nagvenkar and is obviously a regular, “I saw you on TV!” As he turns to go, he rests his hand, ever so briefly, on the journalist’s shoulder.

“Normally there would be more journalists here, for their after-work drinks,” says Nagvenkar, known in Goan media circles as Bhushan, or The Bush, “but at election time, they are busy with all kinds of extras.” One of the extras for journalists in the past week was a meeting with the chief electoral officer on the topic of paid news. In the course of the tutorial, it was explained politely and with simple, easy-to-understand charts that it is not allowed for journalists, editors or management to take money or favours from political candidates. (“It is absolutely normal,” says Nagvenkar, “to go to a press conference for political candidates and be handed press releases with Rs 500 or Rs 1,000 notes attached. Many, if not most, of these guys pocket the notes as if nothing happened. I have never heard of a journalist being disciplined for it, or for any other similar transactions.”)

One of the topics mentioned at the paid-news tutorial was a complaint filed by Nagvenkar, veteran investigative journalist, to the Press Council of India and Election Commission, against Herald, one of Goa’s leading English dailies. Nagvenkar, in an elegant sting operation, seemingly showed that Herald is open to paid-for, self-promoting interviews with political candidates that appear in print as authentic editorial content. Nagvenkar is not new to sting journalism—in 2005, he and partner Jamshed Khan had stung six MPs, Shakshi Maharaj and Paras Nath Yadav among them, showing that they were taking kickbacks. All six were suspended from a session of Parliament as a result. In this current sting, Nagvenkar pretended to be the fictional Bernard D’Costa, a first-time candidate for Parliament. Over the course of four phone calls, he negotiated a deal with the paper’s marketing manager, Tulsidas Desai. It was agreed in the end that D’Costa (alias Nagvenkar) would pay Rs 86,400 for an interview, 15 inches x eight columns long, and that there would be no label marking it as an advertisement—the crux of the matter. D’Costa was invited to submit the questions he would like asked. For another Rs 50,000, three similar interviews would be broadcast on the newspaper’s TV channel. Nagvenkar asked if this is how it had been done with an interview of another candidate, published several days earlier (without any advertorial label), and if that candidate had paid the same fee. The manager said, “Ya, ya, ya, ya, ya.” Nagvenkar’s account on his blog is a darkly amusing, strangely satisfying read. All conversations were recorded by Nagvenkar and published here: paidnewsingoa.blogspot.com/2011/10/goas-paid-piper-paid-political.html.

With the publication, all hell broke loose. For a moment, at least. Then, everything went back to normal.The complaints with the PCI are pending; no one has lost a job; the paper comes out every day as usual (Sujay Gupta, editor-in-chief of Herald, declined answering any questions for this story). One thing that has come out of the sting so far: Desai, the paper’s marketing manager, has sued Nagvenkar for criminal defamation. Nagvenkar, whose day job is with one of India’s national news agencies, is well prepared for the battle.

“It’s not as if paid news only happens at Herald,” says Nagvenkar,“it happens everywhere. There is as much corruption in the media as in any of the institutions it covers. In the big metros, you can cover your tracks. In a small place like Goa, it is very easy to identify who did what, from the senior journalist who freely uses the politician’s credit card, to the top editor who sells drugs to his colleagues in the metros, let alone the plain old cash for stories. Everyone knows what’s going on.” He downs the rest of his feni and adds, “Someone ought to be writing about it, getting it out into the public domain, no? That’s all I am saying.”

“In his personal life, he is such a shy guy,” says SK, an ex-journalist and government employee who has joined Nagvenkar at his table at the Clube Nacional, debunking the myth that no one sits next to Bhushan in public, “but in front of the authorities, he is a lion.” SK, a sweet looking young man, looks at Nagvenkar with obvious admiration. “Bhushan gives the home minister too much tension,” he says, “He gives the chief of police too much tension as well. He is too straightforward.”

“The shock absorbing qualities of a small place are very limited,” says Nagvenkar, “anything unusual stands out.”

SK, born and raised in a village inland from here, has been living in Panaji, learning the ways of the metropolis, for the past 15 years. “I told Bush many times—it will not work for you, you will never get ahead,” says SK. “Here in Goa, people don’t like those who speak straight or act real.”

Nagvenkar, 34, lives with his mother in a picturesque, slightly dilapidated house on the hill road out of Anjuna. One morning, as we sit in the living room, rays of soft light streaming through the windows, he treats me to some shira (semolina pudding) he made earlier. We are discussing the pros and cons of acting as a media watchdog while being employed by the media itself. One of the obvious cons is a low hireability factor, a commonsensical fact learnt the hard way, which has left him slightly bewildered. Nagvenkar enjoys laughing, but returns at the end of most sentences to his native state of sombre.

“I was a very dumb kid,” he says. “I woke up late in life. I have no fond memories of childhood—no fun, no interests, no dreams of grandeur, no wild spots at all. I had no idea I had this edge.” He lost his father two months before graduation, so after a short time in Mumbai (with The Asian Age), he felt the need to come back home. He was asked to resign after four months at his first job, after writing a story on how the police act slower when the accused are journalists. He left his next job after three years and many fights with his editor about stories being “killed” for the wrong reasons. Finally, in 2001, Mayabhushan fell in love, moved to Delhi, and later joined the investigative team at Tehelka. “I was happy for the first time,” he says, “Love was great, the work was intense, the stories hardcore.” But when the Congress came back to power, he and three of the other investigative reporters left Tehelka ‘on dissent’. “It was sad,” he says, “It had become the only magazine in India that was digging up more stories on the opposition than on the ruling party.”

It was around this time that he started his famous/notorious blog, a Goan mediawatch called Pen Pricks, which received an average of 500 hits a day. The sassy attitude and truths exposed excited his loyal fans, but antagonised many colleagues. Pen Pricks, written anonymously (“had to be careful of obvious retribution and lynching”), had a few big successes, including a sting on a newspaper taking money for editorials, and a prank known as Nazi Gate, in which Nagvenkar invented a German agency called the PerusNarpk (super prank) and sent out a press release with a preposterous story: an ex-Nazi by the name of Johann Bach had been apprehended on the Goa-Karnataka border, after trying to sell a stolen piano and confessing his crimes to an Israeli couple at a rave party, and whisked back to Germany. The release was packed with ridiculous details and many clues. “I was sickened by how the media had recently reported on the Scarlett Keeling and Arushi Talwar murders, using any rumour that came their way,” he says, “I wanted to see if anyone out there did any fact checking at all.” The prank succeeded beyond his most bizarre expectations: the story was picked up by almost all (English) national dailies. Some even put in facts of their own invention, improving the drama of the original. “I was actually amazed,” says Nagvenkar.  Although still anonymous at that point, most people were sure the blogger was none other than ‘The Bush’.

“It would be fair to say that Bhushan, while widely admired,  has not made as many friends as he might have if he’d just learn to keep quiet sometimes,” says a local journalist—off the record, of course. “It’s not that what he does is wrong, he is actually correct and we all know it. But colleagues do tend to keep him at an arm’s length.” Even the Goa Writers Group did not to invite him for membership, allegedly because his blog had been anonymous. “I feel it right here,” he says, thumping his heart, when asked if he minds the snubs. “But it’s okay, I’m not so used to having friends anyway. Besides, my issues were more existential, like where is my next meal going to come from.” It was around that time, by the way, that his engagement broke off.

Back at the Clube Nacional, it is time to place our final drink orders; with elections approaching, no booze is served after 9:30 pm. Anyway, it is a work night, time to wrap it up.

Mr Nagvenkar, could I trust you to keep my secrets even if you thought they were publicly relevant?

“Absolutely. I would probably coax you to come out with it, but my personal space is sacred. I keep confidences. There are a lot of guys out there who believe in me, who trust me. If people couldn’t trust me, I couldn’t do what I do.”

Have you graduated from anonymity?

“I will not write anonymously anymore, I see now that it is the easy way out. But you know, it was strange. When I decided to come out about Pen Pricks, it was

a really big deal. I remember the moment of typing in my name, taking a deep breath, and hitting the publish button.”

“Nothing at all. No threats, no kudos. You know what they say: you are only as good as your last story.