The Political Education of Rahul Gandhi

He says he has learnt more outside Parliament than inside it. Stands to reason, given the two-time MP’s dismal appearance record in the Lok Sabha 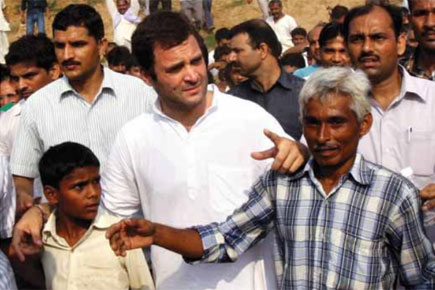 He says he has learnt more outside Parliament than inside it. Stands to reason, given his dismal appearance record in the Lok Sabha


After walking a little less than a hundred kilometres on his first ever padyatra, Congress General Secretary Rahul Gandhi told a bunch of villagers that mingling with folk like them had taught him more than what years in the Lok Sabha had. Rahul was addressing a few villagers at Devaka, a village in his path on the way to Aligarh, Uttar Pradesh (UP), on the fourth and last day of his walkathon. “When we sit in Delhi or Lucknow, we don’t get to know ground realities,” Gandhi told the small gathering of farmers, “I have not learnt as much in the Lok Sabha as I have learnt from you.”

The leader had begun his padyatra from the twin villages of Bhatta-Parsaul, the epicentre of a vigorous farmers’ agi­tation against UP’s Mayawati govern­ment, and also a crisis zone he had visit­ed earlier in May this year after farmer-police clashes had led to a brutal police crackdown there. He had spent hours with protestors, been arrested for flouting prohibitory orders, and, days lat­er, even led a few of them to meet the Prime Minister.

That wasn’t Rahul’s first foray into Western UP and its grievances. Last year, on 22 August, he had reached Jikarpur village near Aligarh in his signature style, taking the state government by sur­prise, and told agitating farmers there he would get them justice. The farmers had been protesting after police-farmer clash­es—over the state’s land acquisition pol­icy—left a 12-year-old boy dead.

For a while now, farmers in this part of UP have been demanding better compen­sation for their land being acquired by the UP government for the Yamuna Expressway project. And Rahul Gandhi has clearly adopted their cause. He has spent plenty of time with them, joining their agitation twice, leading them to the PM once, going on a four-day walkathon from village to village, spending the night in a villager’s house at the end of the exhausting exercise, and finally, ad­dressing a Kisan Mahapanchayat in Aligarh on 9 July.

Rahul Gandhi’s engagement with the issue may have begun just a year ago, but this is his eighth year as a Member of Parliament (MP). And if the second-time Lok Sabha MP has not learnt much from India’s top legislative body, it is probably because he has been no more than a re­luctant participant as a lawmaker.

Look at the numbers. In the current Lok Sabha, the 15th, Rahul has not asked a single question of UPA-II ministers. In contrast, over the two years since May 2009, each of his counterparts—other MPs across political parties—has asked an average of 119 questions. Data com­piled by PRS Legislative Research, a New Delhi-based organisation that tracks key performance indicators of Indian legisla­tors, reveals that against the national average of about 16 debates that every Lok Sabha MP has participated in, Rahul Gandhi is yet to take part in even one.

He did better in his first Lok Sabha term, when UPA-I was in power, though only in comparison with what looks like a dismal second term. His attendance then was 63 per cent, only a little under the national average of 70 per cent; he had asked three questions in five years during Question Hour, as opposed to an all-MP average of nearly 180 each. He had also taken part in five debates, the Lok Sabha average being 30. This time round, however, Rahul has zero questions and zero debates to his credit so far. While the attendance of MPs in the current Lok Sabha has gone up to 77 per cent, Rahul’s has slid to an embarrassing 47 per cent.

Forget getting an education in the Lok Sabha, an ordinary school or college stu­dent with this kind of attendance record would be barred from taking his final ex­ams. But in politics, the exams are of a dif­ferent sort. “In the Indian system, unlike in the US, you are not judged by your per­formance in Parliament,” says political analyst Mahesh Rangarajan, citing the example of former Prime Minister Indira Gandhi, “For the initial 10 years that she was in the Rajya Sabha, she made very limited interventions. She hardly spoke.” Her silence in Parliament in the initial years, he adds, did not stop her from be­coming one of the toughest prime minis­ters India has had.

Rahul Gandhi’s reluctance to exercise overt authority is evident in other ways too. As Prime Minister Manmohan Singh told reporters after the Cabinet reshuffle of 12 July, the 41-year-old leader does not want to be a minister because he is focus­ing on the party organisation: “I request­ed him several times to join the Cabinet, but he has said he has responsibilities in the organisation.” The PM was respond­ing to queries on why Rahul had not been inducted as part of what was touted as the last reshuffle of UPA-II’s tenure.

It evokes a sense of déjà vu. The line that Rahul is too busy with ‘party responsibil­ities’—rebuilding the Congress at the grassroots, that is—to take on a role of governance has been said over and over. “He deliberately keeps a low profile. If he asks a question, ministers will bend over backwards to please him. You can expect Congress MPs to laud everything he says. This kind of situation is best avoided,” says a junior minister once considered close to Rahul, on being asked about his leader’s poor Lok Sabha record.

Rahul can afford to turn down the PM’s offer of a ministerial berth, and might like to maintain a low profile, but let’s face it: legislative duties are not a matter of choice. “It is very important for every MP to engage in the parliamentary proc­ess,” says MR Madhavan, head of re­search at PRS Legislative Research. “The main role of an MP is to represent the na­tional interest: your role is to frame laws, which does not apply just to your constit­uency,” he adds. Since the 1950s, the number of days in a year that Parliament meets has fallen by half the earlier figure. It is down to about 65 sittings a year now. This leaves MPs more time for activities outside Parliament, but it turns a low at­tendance record all the more glaring.

It shows, too. Faced with tough ques­tions from villagers during his padyatra, Rahul chose to respond only in an off­hand manner, if at all. At Bajna village, he did not reply to a farmer who said infla­tion was hurting them as much as land policies; it was the second time in two days that he had ignored this point. At Chandpur, a young man questioned him on corruption, and he said ministers had been sent to jail for it, that action had been taken. He took no supplementary question from the young man, and di­rected him to read the papers for details.

Perhaps Rahul Gandhi would have been better at handling tough questions if he had learnt from debates in the Lok Sabha. But five debates in seven years is just not enough education.