A tribute to some extraordinary photojournalists who brought us the first images of the terrorists—images we will never forget. 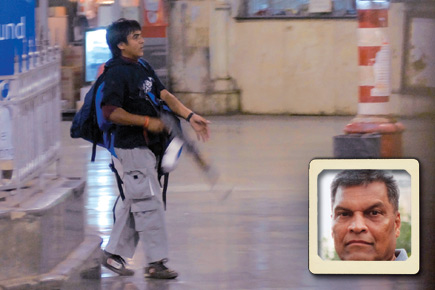 A tribute to some extraordinary photojournalists who brought us the first images of the terrorists—images we will never forget.


A tribute to some extraordinary photojournalists who brought us the first images of the terrorists—images we will never forget.

On the night of terror, last November, newspaper photographers rushed to the buildings that were under attack and they took positions in the very heart of the slaughter. It was part courage, part habit. They were professionals who knew exactly the risks they faced. And they brought us the first images of the terrorists—images that we would never forget. A tribute to some of those extraordinary journalists.

Sebastian D’Souza knew it was going to be easy. On the night of 26 November, the photo editor of Mumbai Mirror was inside the Chhatrapati Shivaji Terminus, better known as Victoria Terminus. It was easier than his earlier stories. Take riots. Who knew how a mob would behave? He located the terrorists by running to the sound of gunfire. He peeped from behind a wall with two armed policemen unwilling to shoot. “They looked like backpackers, and I wasn’t sure,” he remembers thinking when he first saw them. He goaded the police into firing, a move that resulted in a deadly retaliation. One of the bullets hit and killed a man who ran a book stall. They all scampered. Sebastian ran into the ladies’ compartment of a train at platform 6. Still too close, he thought, and went to platforms 3 and 4. “I didn’t know which side they would come from, and I kept very quiet behind a pillar there. It was so quiet there that when I made the slightest sound they would look towards me.”

He took pictures and avoided detection a while before entering the closest compartment of a nearby train. It was two behind the motorman’s cabin, which was exactly where Abu Ismail and Kasab were headed. “My heart was beating fast. They stood close to the cabin and spoke for a while. Then one of them dropped a backpack and they reloaded. As this happened, a train entered at platform 2.” The passengers were sitting ducks, and Sebastian yelled at them to run to the exit. Everyone except the motorman got out. “I think he decided to lie low inside. “There was somebody in every train,” he says. “Usually old people who could hear the firing and wanted to know what was going on outside.”

Sebastian saw them amble down platform 1 and soon the gunfire stopped. He guessed they had left the building, and abandoned cover to take pictures of the bodies. Seeing him do this, he says, others emerged from their hiding places. More people had taken shelter in the trains than he had guessed.

Behind him, the Anti Terrorist Squad appeared. One jittery cop thought he saw one of the terrorists. “‘There! There! There!’ he pointed and shouted. And those guys… they started firing at the crowd.” Sebastian lost it. He screamed at the cops to stop. “Thankfully, no one got hit.”

“I got out of the terminus. There was no point. I didn’t know where they were. If I did, I would have gone there.” All along, his family tried calling but couldn’t get through. They feared the worst. “If this happened again, I would do it again. It’s my job. It’s what I’m supposed to do.”

It took 10 days for Vrushali Prabhu to learn where her husband Vasant really was on 26 November. A photojournalist with the Indian Express, Vasant was the only photographer inside the Taj Mahal hotel on the first day of the attacks. “When I answered her missed calls I told her I was safe, watching everything on television.”

Vasant, an Indian Express veteran of 17 years, was on night duty when he got a call about a shooting incident outside Leopold Cafe. He and a reporter made the 10-minute bike ride from their office to ground zero. “When we got to Colaba, people were running away from the area. They said don’t go or you will die. So we walked to it from a lane behind the Taj.” The shootout at the hotel had just begun, and while Vasant contemplated his move, he saw policemen, including deputy commissioner Vishwas Nagre Patil, run into the hotel from the back. Vasant followed.

It’s evidence of the utter chaos that no one had time to check who Vasant was and what he was doing. “The security asked, I showed a sign that I was with the policemen. Then whatever the police did, I did.” The motley group of cops, security and lensmen moved through the hotel’s heritage wing. “We could hear grenades and gunshots. There were bodies everywhere.”

Vasant documented the chaos of those early hours when the police had no idea who they were dealing with. A suspicious hotel guest was surrounded by the cops when they saw blood on his hands; it turned out he was helping people who were injured. When the group was on the third floor of the building, they were shot at from the floor below and, for a split second, Vasant saw the gunman.

Vasant says he was conscious that his work shouldn’t endanger those he was with. “At the pool area, there were several dead foreigners, and I knew I had to take a shot. I tried to do it without a flash but it just wasn’t working, so once the policemen moved away, I took the name of God and used the flash.” The Taj swimming pool is in a central courtyard within view of windows on every floor.

After two-and-a-half hours in the hotel, Vasant returned to his office. The newspaper had extended the deadline for Vasant; the next day, his shots were the only chronicle of what had happened inside the hotel. “I did my job,” he says.

That morning, Mumbai Mirror photographer Raju Shinde stood outside the airport with his camera, and waited for something interesting to happen. There was no sign of his subject, a combative passenger involved in a fight, and he called off the assignment late afternoon. Perhaps meeting a friend, Seshan Shinde, a cop, at Victoria Terminus would salvage the day. As the train reached the station where he had met Seshan so many times, his boss called. There were new Nikon D300s at the office, one with Raju’s name on it. The meeting with Seshan was postponed, and Raju walked to his office in The Times of India building, across the street from the station.

At around nine, a source called to tell him that an encounter was on at Leopold. Raju asked a colleague, Satish Malavade, to get his bike out. As they sat on the bike, a loud explosion rang out. Then another. People streamed out of the station wide-eyed, screaming. Both photographers tried using a subway to access the station, but this was like fighting the tide. They were separated, and Raju ventured in on his own. “I thought there were blasts in the train,” Raju says. He found platform 4 deserted (it’s almost impossible to see something like that in Mumbai). Local trains were stationary. He peered about for clues. Then he saw them, walking calmly three platforms away, opening fire at someone he couldn’t see. He managed to snap three pictures before they saw him and opened fire. He ducked, and at that instant saw his friend Seshan run towards the terrorists with his pistol drawn.

Raju hid behind a pillar. When he peeked out from behind it, his eyes met a terrorist’s. It earned him a barrage of bullets that tore through the table beside. Meanwhile, his phone kept ringing. Friends. Office. Family. The usual. Then the firing in his direction stopped. Someone else had the gunman’s attention. Raju ran to platform 1 and hid behind a wall with a petrified constable. Another man joined them there. Closed circuit cameras showed him standing up to take a picture and then diving, leaving many in his village watching it live to presume he was dead. “I stood up to take a picture of Kasab but the guy next to me told me to sit down. As I went down, I heard a sound, and the next thing, he was bleeding. We could not do anything.” His wife called, but he couldn’t talk. Soon the gunmen walked away, and the firing stopped. He returned to his office, where shaken colleagues heard his story. At 1:30 am he called home to assure his wife he was alive. He saw her two days later.

He returned to visit Seshan a few days later, and learnt that his friend had been killed beside an ATM. He was the first policeman to die that night. “We were constantly on the phone. In eight years he had never come home, but we were always on the phone. Everyday.”

At 10:30 that morning, The Times of India photographer Satish Malavade was running for his life. A demolition at Santa Cruz had turned violent when settlers decided to defend their turf. They threw stones and bottles with flaming rags at the police and journalists. Satish got his pictures, and returned to work. Then Raju Shinde told him that there was an encounter at Leopold. “Usually it’s some chitkut gangster,” he says. But they heard the explosions at VT, and their plans changed.

They lost each other at the entrance to the subway. “Raju went down the stairs,” Malavade says, “I tried another entrance”. Here he met a group of police heading elsewhere. Their leader swore and ordered him to leave. Malavade resisted, and one constable volunteered to accompany him inside the station. As they crept in, a man cried out that his wife and children were in the station. “He wanted to run in, but I told him to be with us.” As they stepped in, the man rushed past and disappeared into the station.

“We were there for 53 minutes,” he says. From their vantage point at the metal detectors, where they lay flat, the two saw the owner of the Wheeler book stall die. Malavade was so terrified, so focused, that he didn’t notice photographers a few feet away, some snapping, one frozen with fear. “Ismail was sharp, and I found him better than Kasab. His eyes moved constantly, just looking, looking at the exits, trying to see who was there. He kept giving Kasab instructions. Not by talking, but by nodding his head.”

At some point Ismail noticed the constable beside Malavade and opened fire. Both retreated to access the station from elsewhere. But the police had initiated lockdowns all over the place. The only place he could go was back to the office. As he returned in a daze, he noticed the office entrance still open, the drivers standing outside, laughing and joking. He shouted at them to get in, and asked the guard to lock the office.

Before he went in, he stood near a group of policemen at the building’s entrance. He watched them slip on bullet proof jackets, and watched Ashok Kamte and others tighten their belts. One of them advised him not to follow them. “I didn’t go because if they had taken us hostage, it would not have been good.”