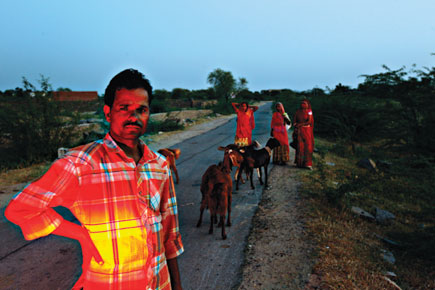 On the fifth anniversary of India’s Right to Information Act, it’s time to ask: does it work? Judge from this man’s story


The India that is recorded in its official documents is not the country that exists on the ground. Official India builds castles in the air as a matter of routine. It puts in place grand laws that espouse grand ideals. But out there in the heat and dust, it takes audacity to actually try and enforce them.

So when the Government decided to declassify its long-running top secret mission called governance, by passing what can only be called a miracle, the Right to Information (RTI) Act, 2005, it wasn’t without an unstated disclaimer: ‘We can tell you, but it could kill you.’

In the past ten months alone, ten RTI activists have been murdered for exercising their right to know. The Union Law Minister, describing them as “martyrs”, has promised a law to protect whistleblowers. On the ground, meanwhile, reality continues to play itself out unhindered by the laws of the land. This is a story of a man, a Dalit from rural Rajasthan, who has dared that reality.

WHERE LIFE IS GRIM

About 600 km from New Delhi is a village in Rajasthan called Sangawaas, located between Jaipur and Udaipur, in the district of Rajsamand. It is home to Kheemaram, a 37-year-old father of three, who has been camping for a fortnight in Jaipur under a pandal, with 150 workers from villages around Rajasthan. He and his fellow campers have a question to ask of the government: how is he to feed his family when wages under the National Rural Employment Guarantee Scheme (NREGS) have stayed unchanged for three years even as the cost of living has only gone up, up and up?

But that is another struggle. Kheemaram was placed at the frontline of myriad struggles by his very birth—as a Dalit. To grow up as one in rural India, particularly, is to experience India at its harshest. But 2010 has been his most harrowing phase yet. His relentless pursuit (that began with the implementation of the Rajasthan Right to Information Act, 2000) to expose corruption and misgovernance in his village has made him some very bitter enemies.

In the mid-1990s, when Kheemaram was only a teenager who had to drop out of school to fend for his family, he became part of Rajasthan’s RTI movement led by the Mazdoor Kisan Shakti Sangathan (MKSS). And with it, he discovered an India envisioned in its Constitution, an India that contradicted almost everything he’d faced in life. Kheemaram had found his purpose in life.

His first successful RTI exposed corruption in the cooperative bank in his village, leading to the arrest of the bank’s manager for siphoning off over Rs 7 lakh of public money. What he hadn’t bargained for was the intimidation that would follow. In taking on a system, he had taken on a fellow villager, a neighbour, Shanti Lal Garg. On being released, Garg went after Kheemaram with threats of killing himself and implicating the activist for it.

“When you expose corruption, you will invariably antagonise those involved,” says Kheemaram, “When I filed an RTI that implicated the postman from my village, who was encashing money orders of people long dead, his wife came to meet me. She asked me what enmity I had against her husband. The money is not your own, it is the government’s, people said. But then, isn’t this democracy ours?”

Kheemaram talks about a movie he watched recently called Well Done Abba. Set in a village, it is a brilliant satire on how a government loan for a water project ends up being used to line the pockets of corrupt officials to push through the paperwork for the loan. “You will find hundreds of stories like that in our villages. Loans get sanctioned and everyone in government gets a cut. But on the ground, there is nothing to show for it.”

For his courage in taking on powerful forces in his village, Kheemaram has ended up losing the popular local support he had when he first started off. “Most people wouldn’t dare rub members of their village the wrong way,” says Parasharam Banjara, an MKSS activist, “But not Kheemaram. He has made his village the centre of his struggle. Even though he has had to counter personal attacks, he has never compromised his position.”

WHERE THE ARC OF JUSTICE BENDS

Not surprisingly, Kheemaram has been shaking up the caste hierarchy in his village as well. He enlisted his wife to provide drinking water to workers at NREGS worksites—rebellious behaviour in a setting where ‘higher’ castes are conditioned to reject water served by a Dalit. Kheemaram created a still bigger stir by using a series of RTIs to expose the use of false Scheduled Caste certificates by village higher castes to gain government promotions. Enough was enough, some concluded. It led to death threats and attacks on his family.

When Kheemaram talks about RTI, he is like a man possessed. He has filed some 350–400 RTI applications. One to the district’s education officer ensured that every school in Rajsamand was painted with a chart of RTI regulations, as the law demands. Another RTI that he filed on behalf of workers in a village in Devgarh not only led to the release of wages due to them for two years, but also ensured equal pay for women labourers being paid Rs 10 less at the time.

The genius of Kheemaram, says Nikhil Dey of MKSS, is his fearless and tireless use of opportunities within India’s democratic framework. “There are few people who understand the value of documents,” he says, “Kheemaram has an uncanny knack of pulling out the right order at the right time.”

At home in Sangawaas, sitting amid a heap of paper, Kheemaram pulls out file after file, digging out document after document that nails corruption, prejudice and malpractice. Little wonder that he has been attacked over a dozen times and his family repeatedly victimised. “They abuse us. They throw stones at us. At night, when my father is not home, they come knocking on our doors,” says Devi, his 14-year-old daughter who is studying in class VIII. His second daughter Durga is 12 and his son Aman is six.

His wife, Shanta, has never been to school. Kheemaram jokes that had she known how to read, she would have divorced him. Even after much coaxing by her husband, Shanta cannot bring herself to talk about what she and the children have gone through over the past couple of months. Every now and then, her eyes well up. Asked again, this time when he is not around, she says, “Even when I am scared, I have nowhere to run.”

In 2010, Kheemaram filed his most explosive RTI yet. One that, by his own admission, shook him up. He took on the police. “When I was at Devgarh police station, I saw that a temple had been built on its premises,” he recounts, “I then filed an RTI seeking information from the office of the Superintendent of Police on how many police stations in the district had religious shrines—be it a temple, mosque or church. I requested their photos and asked for information on who had built these shrines.” After that, he adds, breaking into laughter, “I asked for details of any government official I could approach if I too wanted to build a temple in memory of my recently deceased father.”

And then he abruptly sobers up: “I knew this would have consequences and that I would have to suffer them.”

He was summoned to the SP’s office and asked to deposit Rs 1,000 as a ‘cost of photographs’, subject to which he would be given the information. “I received six photos of temples from five police stations and one police chowki in the district. The covering letter had responses to my queries. It said that no mosque or church had been built in any of the police stations, and that permission could not be given for the construction of a religious shrine on government property. And so, with one RTI, I had made enemies of six police stations.”

Not long after, Kheemaram was chargesheeted by the police for misbehaving with a woman of his village. Nothing had quite prepared him for this kind of slander. “Had I not filed the RTI about the temple, this FIR would not have been lodged. It upset me deeply. When the newspapers reported it, people called me and said they didn’t expect this of me. For the first time in ten years, I didn’t stir out of the house for two months. I considered giving it all up and starting a business or working in the fields,” says the RTI activist.

Kheemaram kept his phone switched off for two months. Unable to sleep or eat, he found himself pushed to the brink of sanity. “RTI activists are not safe anywhere,” he sighs, “And when you take on multiple forces, it can cost you dearly. Since an attack on my house two months ago, I have become even more scared. When I read about activists being murdered, I realise how dangerous this can get. I have slowed down now.”

For the last four months, Kheemaram has not filed any new applications. But he is back to being a full-time activist with MKSS. His latest campaign: wage hikes for NREGS workers. “Wrong information always spreads like wildfire. But the truth takes time to spread. To get justice in one case, you need two lifetimes.”