Priyanka on the stump exudes the charisma of her grandmother. A portrait 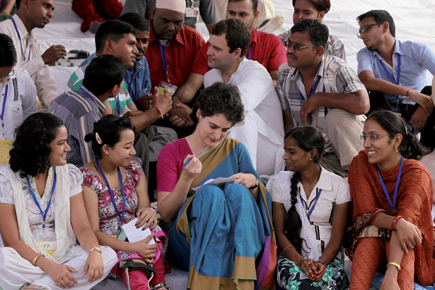 Priyanka on the stump exudes the charisma of her grandmother. A portrait


A few days before she was assassinated, former Prime Minister Indira Gandhi had walked barefoot the lawns at the Nehru guesthouse in Srinagar with a close aide. She told him she could see herself in Priyanka Gandhi. According to close family friends, the former PM told the trusted aide that the responsibility of her granddaughter’s education and training would lie with him in case anything should happen to her.

Perhaps she knew. A few days later, she was gunned down, and the aide sidelined.

There are now signs aplenty that Indira Gandhi’s words were prophetic. Just earlier this year, there was a glimpse of what she perhaps saw in Priyanka, now 42. The day the Telangana Bill was tabled in Parliament, Congress workers were worried. Anticipating trouble, they urged Rahul and Sonia Gandhi not to attend the session. That moment, Priyanka Gandhi entered, and asked why: were bullets going to be shot, would bombs explode? “The issue was explained to her,” says a witness. “She said, ‘We are political people. Why should we be scared? My brother is not a coward. My brother will attend and so will my mother,’ and that explains her natural instinct for politics.”

Priyanka grew up learning kathak and sanskrit. For both she and her brother, now vice-president of the Congress, it was not an easy childhood, by no means normal. First, they saw their grandmother get killed, and later, in 1991, their father. Their lives were heavily shielded. In the mid-80s, both brother and sister had to be withdrawn from boarding schools in Dehradun, and they formed a special bond.

Now that Priyanka Gandhi has taken over the campaign in Amethi and Rae Bareilly, and rules front pages for taking on the BJP’s Narendra Modi, even as she defends her husband, there are those who see her as the saviour of the Congress. Others, who claim to know her, feel she would not pose a challenge to her brother. A person close to the family says that while “Rahul is often considered to have acquired his personality from his maternal side—slightly reserved and cold—Priyanka has taken after her ‘dadihal’ (paternal family) and is like her uncle Sanjay Gandhi and grandmother Indira Gandhi.”

Mother Sonia Gandhi remains an anchor, and as her daughter tours the constituencies of her mother and brother, mobilising cadres, stopping by to speak with people, Sonia is relying more and more on Priyanka Gandhi as a campaigner.

Last month, when Rahul Gandhi went to file his nomination papers to contest the Lok Sabha election from Amethi, Priyanka Gandhi and her husband travelled by road to greet him. Throughout their roadshow in Sultanpur and Amethi, as brother and sister smiled, waved, shook peoples hands and were showered with rose petals, Priyanka was hailed as the ‘daughter of the land’. At chai shops, and chaupals, they recalled how she came to the constituency after her wedding, and the women offered her gifts.

Outside a guest house in Munshiganj in Amethi on 17 April, Iqbal Ahmed, a party worker from Tiloi Vidhan Sabha area, was waiting for his turn to have an audience with her. She had come for a few days to campaign in the two constituencies, and was meeting party workers to get a grasp of local issues. The sun was riding high, and Ahmed was trying to find a cooler spot on the highway among the people waiting for her arrival.

“She listens to us,” says Ahmed, “and she knows most workers by their names. She broke caste barriers in the party by bringing in meritocracy. She doesn’t impose. But we tell her to take over, and she says there should be no issue between brother and sister. She says she is here for him.”

Her style of campaigning hasn’t changed much from what it used to be, only it is much more visible. People close to the party say she is quite in sync with the system and addresses issues of politics mostly from Rahul Gandhi’s house on Tughlaq Road or Jawahar Bhawan. She clocks in more than 12 hours of work every day. After 16 May, Congressmen could clamour for her to take charge of a party that seems beset with confusion. However, Rahul has said she will not enter active politics besides campaigning in family pocket buroughs or contest polls. “Priyanka is my sister. She is my friend. I don’t think she would ever have an electoral role,” he had said.

In 2004, she said she had inherited her saris from Indira Gandhi. She said she was taller, so she had to add an extra ‘fall’ to have them fit properly. That was an instant identifier for people.

There is the other side: Priyanka as mother. Rolly Kumar, whose younger son Anmol is in the same grade as Miraya at Delhi’s Shri Ram School, says she attends almost all school workshops and parent-teacher meetings. “She is always prompt. She would come to drop off her daughter and pick her up until Class 5,” she says. “You would see her early morning at the railway station when the school planned an outstation trip.”

That she came in a motorcade of three cars, her bullet- proof Safari in the middle, was a sign of the power elite she was from—her security was always a concern. But once on the school’s campus, she would interact freely with others, smiling at everyone, Kumar says.

“Of course she is very stylish, and wears these long skirts. Always casual,” she adds. Delhi-based designer Neeru Kumar, who owns the label Tulsi, says Priyanka and Sonia both have an uncluttered sense of style. The green sari Priyanka wore at a recent rally is an example of her subtle taste, says Kumar, identifying it as simple and bold, yet sophisticated. “I think they have a very defined sense of style,” Kumar says, of both mother and daughter. “Priyanka and Sonia don’t wear zari, and go for cotton weaves. Much like how her grandmother would do.”

Anmol, who is in Class 7, finds Priyanka Gandhi funny. Once, she had played a scientist in a skit when the kids were being taught a class, and he found her hilarious. She always sends cupcakes and other baked items to school. He says she is a Congress worker.

Beyond that, his own interactions with Miraya have never been about her family. “She is into sports and is great in races,” he says. “Miraya is not like others. She says ‘Hello’ not ‘What’s up?’ She has a lot of friends. She is very popular,” he says. “And her mother is always there. Her class projects are really good.”

Known to be fond of children in general, Priyanka is also credited with doing up the office basement of the Rajiv Gandhi Foundation and converting it into a children’s library that is visited by students of several schools in Delhi.

“She is very close to her brother, who is not a classical politician who believes in the rhetoric that one has to win this election,” says another aide, “He isn’t hungry for power. He has a vision, and is a strategist. I think when he talks about empowerment, he believes it.”

Those who know the siblings insist on discretion, speaking only in whispers, if at all, and always sticking to protocol. The two are not to be named. Only then would they reveal anything to a scribe. These are ‘those times’, they say. “She has charisma,” says one, “She is less anglicised than her brother, and in a speech recently, the only English word she used was ‘computer’.”

Language is a tool she understands well.

In December 1998, soon after Sonia Gandhi decided to enter politics, Priyanka Gandhi was by her side at a rally in Sriperambudur, Tamil Nadu. The rally was only attended by a couple of hundred of people, says a family aide. “She spoke a sentence in Tamil,” he says. “She had that instinct. She is a natural leader. She isn’t a housewife. That’s an understatement.”

“She is easily the most photogenic politician we have who dresses in saris, dons a short hairstyle and is extremely fair— an instant throwback to her grandmother,” says image guru Dilip Cherian. “Also, she may be visible everywhere, but is rarely available,” he adds, pointing to the mystique that surrounds her.

“Call it her induction or call it her suction, it has begun,” says the aide. “It is inevitable. She has spunk. She is uninhibited. It was the family’s decision to project Rahul Gandhi. She has been a great source of strength to her mother and has a strong connection to the Hindi heartland in terms of reaching out to people,” this person adds.

“In many ways, the battle is about mindspace. She has managed to compete with Modi on that,” says a friend.

“I was close to her father. I have seen her grow up. Indiraji used to keep her by her side, making her make lists [of people] to distribute gifts to. But again, she can’t be Indira Gandhi,” he says.

He then recites a couplet, attributed to Allama Iqbal. It signals his loyalty to the dynasty, and allegiance to that one name: Indira Gandhi.

Maybe that time isn’t far. That’s what he’d like to hope. But again, the mind is a difficult thing to navigate. There are a million sides to her. Like her grandmother.