God’s gift to the Congress 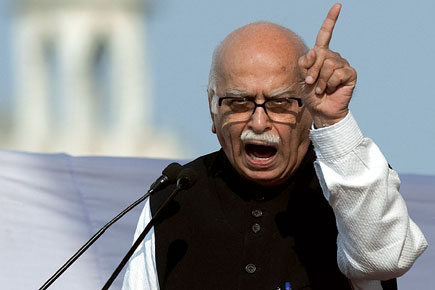 God’s gift to the Congress


If anything, the resignations of two cabinet ministers facing charges of moral turpitude, and that too from a government on crutches, should come as a shot in the arm for the opposition. But the Bharatiya Janata Party has not been able to make political capital of it. Its own troubles are to blame. Though the BJP’s debacle in Karnataka was a foregone conclusion, it has again bared the cracks within the party, slowing down its imagined ascent and drawing attention away from the disarray in the Congress to the contradictions within the BJP.

Of late, party patriarch and the BJP’s original PM-in-waiting LK Advani, 85, has been pursuing his old ambition with renewed vigour. When he cannot get others in the party leadership to follow his line, he airs his dissent through blogposts, which are then circulated to the media by the BJP office. Last Sunday, Advani was in top form. He blogged about the lessons that the Karnataka results hold for both the BJP and Congress. ‘Actually, I hold that it is the Karnataka results that have contributed to clinching action being taken even in the matter of Coalgate and Railgate! Before Karnataka results, the Congress Party seemed determined not to do anything about the two scams even if it meant a total washout of the second half of the Budget Session,’ he wrote.

Advani is critical of the Congress, of course, but his latest post’s ire was largely directed at his own party. ‘I feel sorry that we have lost in Karnataka. But I am not surprised. The surprise would have been if we had won,’ Advani wrote.‘Let me first point out that BJP did not throw out Yeddi [BS Yeddyurappa]; it is he who broke away from the BJP and decided to form a factional party of his own, the [Karnataka Janata Paksha]. In fact, when it became apparent that he was unabashedly indulging in corruption, if the party had immediately taken firm action, the course of events would have been quite different. But for several months, frantic efforts went on somehow to keep placating him by condoning his peccadiloes. The justification given was that if the party did not adopt such a ‘pragmatic’ approach we would lose the only government that we had in the south.’

Within the BJP, Advani’s going public with his grievances online is seen as a greater injury to the party than the defeat itself. A senior leader, also among the several competing with Advani and Gujarat Chief Minister Narendra Modi for a party nomination to the country’s top job, admits: “[Advani’s blogpost] sends out the signal that the party is speaking in discordant voices.”

Advani’s multi-pronged attack on BS Yeddyurappa and those he disagrees with in the BJP comes at a time when there are murmurs of the former Karnataka CM returning to the BJP’s fold, just as Uma Bharati and Kalyan Singh have done in the past. All along, it was Advani and his protégé from Karnataka, Ananth Kumar, who had been gunning for Yeddyurappa, and it was this that hastened his exit and formation of the KJP.

The veteran leader’s blogpost may thus be seen as his own spin to swing the story of Kumar’s political ambitions to one of his own ‘principled stand against corruption’, as opposed to the BJP’s opportunism. Recall that it was in Karnataka that another Advani protégé (and another PM aspirant), Sushma Swaraj, had openly backed the Reddy brothers till the mining scam proved their undoing.

To the public display of discordance within the party, add incoherence. Advani’s blogpost came a day after BJP President Rajnath Singh, yet another PM-in-waiting, said the loss in Karnataka was a result of Yeddyurappa’s departure. “It is true that when a leader who has built a mass base suddenly parts ways, it affects the party,” Singh told journalists on 8 May. Asked for the party’s strategy to counter the erosion, given the forthcoming Lok Sabha election, Singh said: “We will go to the people.” In the same breath, he added that the party plans on reaching out to people far and wide: “We are going to the booth level. The attempt is to have people at every booth before the election.” Singh may have pipped Nitin Gadkari to the post of party president last year, but he often sounds just as vague.

Despite a crisis engulfing Prime Minister Manmohan Singh—and so even from within the Congress—the BJP president made it clear that his party would not contribute to the UPA’s discomfort. “If the Prime Minister introspects honestly,” Singh said, “he will have no option but to resign.” After another session of Parliament was washed out due to disruptions engineered by the BJP, Singh said the party would cooperate with the Government in the next session to push vital pieces of legislation through. “There are two major bills that we want passed with amendments: the Food Security Bill because it concerns the poor, but with debate, and the Land Acquisition Bill because farmers will benefit from it. But we want certain amendments,” he said.

The BJP came in for severe criticism for disrupting parliament from treasury benches as well as critics of the Govern-ment. The party had let its approach of leading critical debates on the UPA’s failings in the early days of the 15th Lok Sabha fall prey to ‘competitive hooliganism’, to borrow a phrase from Rajya Sabha Chairman Hamid Ansari.

Referring to the Karnataka loss, the leader offered an analysis of the scenario, saying the state election was “more arithmetic than chemistry”, implying that the electoral calculus (thrown up by Yeddyurappa’s exit) mattered more than the public sentiment against the BJP in the southern state. As another General Election looms for which the BJP still seems ill-prepared, the party is already grappling with a calculus disadvantage. Its messy internal dynamics could extract a huge toll, and the BJP could well fritter away the anti-incumbency advantage that the UPA has so diligently worked towards handing the opposition. The BJP’s several PMs-in-waiting might end up waiting yet another term.