The BJP is riven again as the Reddy brothers bay for the head of Karnataka Chief Minister BS Yeddyurappa. Earthy interests lie at the heart of their rebellion 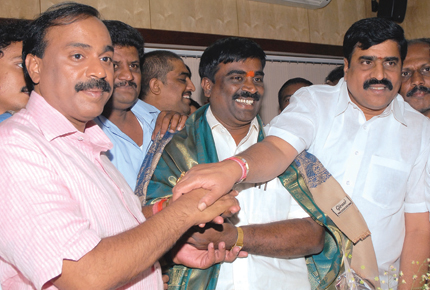 The BJP is riven again as the Reddy brothers bay for the head of Karnataka Chief Minister BS Yeddyurappa. Blame it on earthy interests.


There’ something about Bellarythat rings bells across India. It’s that quaint place in Karnataka that once saw the promise of an all-woman battle royale between leaders of India’s two national parties turn into a no-contest, as the BJP’s Sushma Swaraj suffered an electoral rout at the hands of the Congress’ Sonia Gandhi. This time round, what’s ringing loud and clear are alarm bells—for a party which has won power in Karnataka since, the Bharatiya Janata Party (BJP).

The saffron party’s first ever government in the south is threatening to come apart under forces set loose by the Reddy brothers, Bellary’s infamous miner barons who’re thought to have bought their way into the political reckoning. They have reached New Delhi with their demand to replace Karnataka Chief Minister BS Yeddyurappa with a choice of their own.

Iron ore is a volatile trade globally, but the gall they have summoned here is in another league altogether. Just who are these three brothers holding the BJP to ransom? What accounts for their clout? The trio is led by the articulate Gali Janardhan Reddy, 45, the state’s tourism minister. Karunakara Reddy, 47, is the revenue minister, and Somasekhara Reddy, 43, is an MLA with no cabinet post. Sons of a police head constable of the erstwhile Madras Presidency, they are simply Karnataka’s richest politicians today (Karunakara’s declared assets: Rs 34.1 crore; Somasekhara’s: Rs 29.2 crore). Together with a politician called B Sriramulu, a long-time crony, they have played the financial catalyst in the BJP’s rise to power in the state.

In the 2008 May polls, nobody would have given the party a chance at capturing the 224-seat Karnataka Assembly without the generous aid of their moneybags. The BJP won 117 seats, and the party’s central leadership was overjoyed (the south had been saffron resistant otherwise). For the feisty Reddy brothers, however, the ‘bang’ for their Bangalore buck has been a shade below expectations. Hence, the revolt.

The immediate provocation was their effort to garner Rs 500 crore from all the miner barons of the region for what was touted as a housing programme for the flood afflicted. It was not a government scheme, so the CM punished the officials who attended the launch gathering by transferring them. Seething, the brothers upped the ante in response. Claiming the support of two-thirds of all BJP legislators (apart from six independents), Janardhan Reddy asked for a switch in Karnataka’s chief ministership, offering to parade the rebels before Party President Rajnath Singh—who rejected the offer outright. It was bad enough that the brothers had whisked a large number of MLAs away to isolated resorts in Hyderabad and Goa.

The Reddy brothers are not new to conspiratorial politics of the seaside resort kind. Back in 1984, when the young Reddys were in the Congress, their party toppled the NTR government in Andhra Pradesh by detaining some of the rival party’s legislators in Bangalore, an event that was seen as a coup for the brothers then. Their next big chance came in the aftermath of the October 1999 Lok Sabha election. Once Sonia Gandhi gave up the Bellary seat in favour of Rai Bareilly, the relatively resonant constituency she’d won in Uttar Pradesh, politics in the district underwent a drastic shift that the BJP began to capitalise on. Though Sushma Swaraj had lost, she kept returning to Bellary for the annual Varamahalakshmi festival, for which the Reddy brothers—who quietly switched sides—would organise mass marriages. First, the brothers captured the Bellary civic body; Somasekhara became mayor. Slowly, they established their writ, and by 2004, the once impregnable Congress fortress of Bellary was aflutter with lotus flags.

It was in that phase that the Reddy brothers, who ran Ennoble Savings and Investment India Pvt Ltd, invested in a few mining firms and struck paydirt in China’s growing appetite for iron ore imports from Bellary. Before long, every road from the district to the ports of Goa, Karwar and Mangalore had acquired a brick-red layer of dust, ravaging everything along the way from tree tops to thatched roofs. “This has been going on for more than six years,” says an environmentalist, “The state transport department, instead of levying fines on overloaded trucks damaging state roads, has evolved a corrupt system where trucks loaded with ore have to pay a fixed sum per tonne of excess load.”

Once China’s iron ore binge ended after the Beijing Olympics, the Reddy brothers had another plan up their sleeves. Unmindful of party loyalties, they teamed up with former Andhra Pradesh Chief Minister YS Rajasekhara Reddy’s son, Jagan Mohan Reddy of the Congress, and announced Brahmani Steels, a joint venture steel plant in Caddapah, the former CM’s home base. Suddenly, the brothers had everyone’s attention.

But then, party loyalty had never been their strong point. Back in 2006, when the BJP forged an alliance with the Janata Dal-Secular (JDS) to form a government on a 20:20 basis—twenty months each—in Karnataka, Janardhan Reddy had hurled allegations of corruption at the JDS Chief Minister HD Kumaraswamy. In August that year, Janardhan Reddy ran a day-long soap opera at a press conference in Bellary, where he announced that he would offer documentary evidence. Eventually, he released grainy footage of someone demanding and receiving money. The only disciplinary action he invited was a temporary suspension.

But the BMW-driving brothers were quickly back in business after Kumaraswamy refused to hand over power to the BJP as part of the 20:20 deal. In the subsequent 2008 polls, the Bellary brothers moved heaven and red earth to bring the BJP to power. “They achieved this by moving into neighbouring districts and bankrolling at least 25 BJP campaigns successfully,” says a BJP leader on condition of anonymity, “They reached out to other MLAs too, as they were seen to be powerful when they landed three ministerial berths between the brothers and their acolytes.” That’s not all. “They also reached out to the Congress in AP and got mining leases in Anantpur, adjoining Bellary, from the YSR government. It was around this time that there were allegations that the Obalapuram Mining Company promoted by them had encroached on forest territory and that they had started illegal mining. The AP forest department, Survey of India and the Karnataka Lok Ayukta held independent inquiries… The AP forest department has sent them notices, while the Lok Ayukta has not yet made the report public,” says the party leader. “There is clear evidence that they have shifted the boundary pillars of Karnataka to extend their AP mining leases into Bellary,” adds a Lok Ayukta source, “It is up to the Karnataka government to take action.”

Soon after the AP forest officials sent them notices for illegal mining, the brothers started heckling Yeddyurappa. “Though it’s two years since the allegations first surfaced, they had earlier used their clout with the AP CM to turn a blind eye,” says a Hyderabad source, “but now they cannot influence the state’s new CM K Rosaiah.”

The steel plant was meant to forge a relationship with AP’s political leadership, and with that project in limbo after YSR’s death, BJP insiders say the brothers’ current behaviour has more to do with AP than Karnataka. Sources claim that Jagan Mohan Reddy has promised to split the BJP in Karnataka to enable a Congress comeback. In turn, YSR’s son wants help with becoming the CM of AP.

Though the Karnataka Congress has distanced itself from all this, terming it an internal matter, a Congressman warns against any false move—the BJP could gain by way of public sympathy. Meanwhile, another palace intrigue doing the rounds is that HN Ananth Kumar, BJP general secretary and MP from Bangalore South, is encouraging the Reddy rebellion as part of a plan to win the party’s leadership race in Delhi.

Yeddyurappa, aware of the goings-on, has turned defensive. In Bagalkot, he publicly asked all MLAs to go and oversee flood relief work in their constituencies. It was a plea of sorts. “I may have committed some mistakes,” he said on 2 November, sounding conciliatory, “I will try to understand the feelings of the Reddy brothers.”

The Reddy brothers may relent, but not without asking for the head of such powerful Karnataka politicians as Shoba Karandlaje, who’s much too independent for their liking (and stands accused of acting as though she were the CM herself), apart from a bigger say in the state’s governance. The brothers have been eyeing the home ministry, as the whispers go.