Sunrise in the East 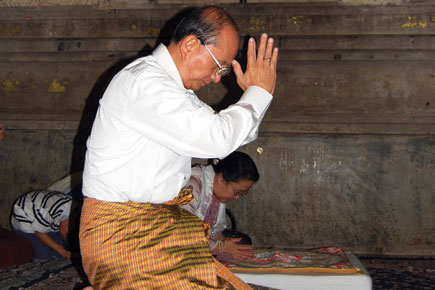 
NEW DELHI ~ Something unusual is happening in Myanmar. Though the world is looking at it sceptically, there is strong evidence to believe that things are changing for the better in India’s eastern neighbourhood.

Myanmar, it seems, is cosying up to democracy. Though it is not the elections-based democracy that the international community is used to, nevertheless, the news from Myanmar looks encouraging. In the past few weeks, things have moved in Myanmar at an astonishing speed. Hundreds of political prisoners have been set free, and restrictions on media have also been relaxed considerably. There are plans to release more than 6,000 prisoners. For the first time in more than two decades, as Daily Telegraph reported recently, magazines have been allowed to carry pictures of its most popular dissident leader Aung San Suu Kyi on their cover. Access to the internet has been allowed, and the ban on free trade unions has been lifted. Bowing to protests from people, Myanmar has also scrapped its $3.6 billion Myitsone hydroelectric dam project with China (which would have been beneficial to China).

America has responded with enthusiasm to this change, keen as it is to engage with Myanmar. India, too, is hoping that its look-east policy may finally pay dividends. For years, India had been sympathetic to the anti-Junta dissenters. It sheltered hundreds of such activists and was even secretively supportive of Burmese insurgents active in its border areas. In return, Myanmar provided shelter to extremist groups active in India’s Northeast. There was one incident where Sana Yama, the chairman of the Manipur-based insurgent group UNLF, was arrested with about 200 of his men in a series of raids on the group’s hideouts. After a few months of detention, they were let off apparently because Myanmar was irked at some statements made by New Delhi about Aung San Suu Kyi’s detention.

As Myanmar makes changes now, India is clearly at ease with engaging with the Myanmar government. It was much evident during the recent visit of Myanmar’s President U Thein Sein to India. In the past as well, India has played host to Myanmar’s top leaders, but it has always been embarrassing to be seen on the red carpet with dictators. But the current Myanmar president is gradually changing things. As a confidence-building measure aimed at his main political opponent Suu Kyi, Thein Sein appointed her former liaison officer as minister of social welfare, and her friend, U Myint, as chief economic adviser. To further strengthen cooperation, India has offered Myanmar a $500 million line-of-credit for development projects, which is in addition to a similar package of $300 million last year. The two countries have also reportedly exchanged lists of those seen as ‘enemies’ by the other side. This was pointed out indirectly in a statement that reaffirmed on both sides the countries’ ‘unequivocal and uncompromising’ position against terrorism, and pledged to enhance cooperation between the security agencies of both against insurgency and terrorism.

Sources say that in the coming months, more reforms will be started within Myanmar. It is believed that there are two factions within the Myanmar Army. While one wants to go slow on the democratic process, the other firmly believes that Myanmar badly needs to shed its image of being the Subcontinent’s North Korea. India is also of the view that it is better to engage with a semi-dictatorship than wait for a fully democratic set-up to evolve. But given China’s interest in Myanmar (apart from other things, it is also eyeing its gas and oil reserves), India may find it tougher to get the kind of foothold it is expecting in Myanmar. Experts believe that given Myanmar’s geography, it would be impossible for the country to dare isolate China. Currently, China is the biggest financial supporter of Myanmar, having invested $10 billion in 2010-11 alone. More than $7 billion in additional loans are in the offing in the next few years.

Though the complete picture will be clearer in the coming months, experts believe it is in India’s interest to engage Myanmar. Apart from sharing a 1,643 km-long border, its maritime border is also crucial for India, given China’s naval belligerence. As a Norwegian diplomat recently said, real things are happening in Myanmar. And India needs to be prepared for it.  Realistically.