The ugliness of caste politics in Tamil Nadu 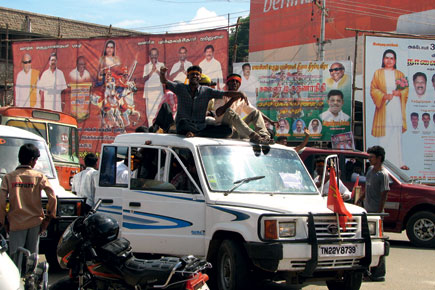 The ugliness of caste politics in Tamil Nadu


On 30 October this year, a convoy of white SUVs raced past a road in Madurai, Tamil Nadu’s second largest city. The vehicles were full of men. Some of them leaned out, furiously waving flags of the left-wing Forward Bloc party. Some even sat atop, pretending to dance to popular Tamil film songs playing loudly. Many of them were visibly drunk. As policemen sat helplessly in their patrol vehicles, the men had a free run. One of the vehicles closely brushed past a woman and she was almost hit by its flagstaff. She retreated quickly, fear writ large on her face. This was clearly not a day for women to be out. This was a day for a wild display of machismo.

It was Thevar Jayanti, the birth commemoration day of the godfather of this ‘backward community’ (as classified), Muthuramalinga Thevar. The SUVs were on their way to Goripalayam, a bustling intersection in the city with a statue of Muthuramalinga.

On Thevar Jayanti, Goripalayam screams for attention through loud colours and hollering men. Hundreds of women draped in bright yellow or orange saris walk towards the 15-foot statue with offerings in decorated pots on their heads. Men in white form a protective barrier around the women, facing onlookers. Some of them, in twos or threes on bikes, circle the statue and scream something unintelligible. But it is not the words that matter. It is the attitude that does, an attitude that reeks of macho pride.

It all began in the 1950s, when Muthuramalinga united three backward castes—Maravars (his own), Kallars and Agamudaiyars—under the Thevar banner with the purpose of securing reservations in the Assembly. He was not born in Madurai, he was born in a nearby village, Pasumpon, which now hosts an official memorial. The statue in Madurai, built in 1974 during the regime of M Karunanidhi, was a clever political ploy of his followers, who needed an urban base for their movement. Today, representatives of all political parties descend on Madurai to ‘pay respect’ to the statue in the glare of popular attention before paying Pasumpon a token visit.

Muthuramalinga was known for his crowd-swaying oratory. He led the Tamil division of the Forward Bloc, and Thevars still form the core of the party in the state. Contorting Muthuramalinga’s lore further is his projected image as a freedom fighter—for trying to eliminate Maravars from the Criminal Tribes Act; for being elected thrice to Parliament; and for efforts to form a non-Congress coalition in Tamil Nadu (a move influenced by his personal rivalry with the then state Congress leader Kamaraj). Muthuramalinga remained a bachelor, proclaiming his own divinity.

It is on the pretext of celebrating Muthuramalinga’s birthday that Thevars gather in Madurai to loudly proclaim—for Dalit ears in particular—their pride in being mukkulathor (‘of the three clans’). In the run-up to the festival, caste tension tends to spread across the city and its neighbouring towns, often with blood being shed as Thevars taunt Dalits as ‘inferior’ and Dalits attempt to disrupt processions of Thevars.

Thevar-Dalit relations grew particularly strained in 1957, after the murder of the Dalit leader Emmanuel Sekaran. There are various versions to the story. One goes: Sekaran, a young man with a military background, was used to crossing his legs—a mannerism that met Muthuramalinga’s disapproval during a peace committee meeting of caste leaders. Other stories involve minor variations of how Sekaran slighted Muthuramalinga. A fact no one disputes is the murder of Sekaran the very next day.

Decades later, in the 1990s, violence erupted against Dalits across Tamil Nadu after a show of Dalit assertion against discrimination and untouchability on the occasion of Ambedkar’s centenary. Film theorist Rajan Krishnan, in an essay in his book Tamil Cinema: The Cultural Politics of India’s Other Film Industry, draws on caste theorist MSS Pandian’s reason for the growing enmity between Pallars (the main Dalit subcaste in the region) and Thevars in southern Tamil Nadu. He writes that despite the Dravidian parties’ attempts to consolidate the support of all non-Brahmins, they could not get aboard significant caste groups such as the major Dalit subcastes of Pallars and Parayars, apart from Thevars of the south and Vanniyars of the north. In the late 1980s, a political party formed by Vanniyars, the Pattali Makkal Katchi, tried to co-opt Dalits as well. Southern Tamil Nadu, however, saw no effective political effort to mobilise Pallars and Thevars.

Dalits in Tamil Nadu have their own annual celebratory event, a Guru Puja conducted on 11 September, the day Sekaran was killed. There is again a big display of rowdyism, spurred by free flowing booze, though not on a scale as grand as Thevar Jayanti.

The Hindu ritualisation of these events is not so odd, given the social context of the leaders’ struggles. “Thevars adhere to the [Hindu] caste hierarchy. Muthuramalinga is known to have acknowledged the superiority of Brahmins and consequently of Hinduism,” explains Stalin Rajangam, a researcher and writer on caste issues in Tamil Nadu. All Polaroid images of Muthuramalinga, for instance, have him with horizontal triple-striped vibhuthi (holy ash) and a big red dot of kumkum on his forehead.

Dalit ritualism is a more complex story. Across India, both before and after Independence, large numbers of Dalits converted to Christianity to renounce the caste system. “Emmanuel Sekaran was initially a Christian, [and he] converted to Hinduism only to avail of an SC/ST quota in elections, and had in fact preached progressive values like education,” says  Rajangam. But Pallars in the region were willing to be co-opted by a process of Sanskritisation led ironically by their professed nemesis Muthuramalinga.

The swelling crowds at Sekaran’s memorial are indeed a sign of Dalit mobilisation in Tamil Nadu, and the phenomenon has predictably had to face retaliation. For instance, on the occasion of Guru Puja last year, police forces shot six Dalits in the name of quelling an unruly mob in Paramakudi, which has a horrid record of police atrocities against Dalits.

This destructive dynamic between the two communities has permeated popular Tamil cinema, which abounds with references to the Thevar community as a synonym for valour, especially through catchy songs. For years, violence in Madurai has been a staple of Tamil cinema, and the sickle is depicted as a symbol of Thevar identity.  An internet search for ‘Thevar songs’ on YouTube can be an illuminating experience. ‘The Thevar caste has figured regularly in the movies in recent times. These ‘southerners’ are portrayed as a volatile, aggressive and backward group,’ writes cultural theorist Selvaraj Velayutham in Tamil Cinema. This imagery is borrowed from Thevars’ own projection of themselves as a community of warriors. Although there is no caste record to prove it, it is widely acknowledged that many Thevar men join either the police or armed forces. Such overt portrayals of masculinity are not exclusive to men. A song demonstrates this: ‘Mukkulathor pombala, mukkavasi ambala’ (A mukkulathor woman is three-fourths a man).

The 1992 superhit film Thevar Magan starred and deified Kamal Haasan and Shivaji Ganesan as Thevar leaders. In it, Haasan’s character does denounce violence and requests Thevars to take to education instead, but only in the last five minutes of an otherwise violent movie. Also, an outsized cut-out of a sickle-wielding Haasan was placed right in front of the Thevar statue in Goripalayam. One of the film’s songs, Potri Padadi Ponne (‘sing, praise, oh girl’) remains hugely popular during Thevar Jayanti celebrations and has become a Thevar anthem of sorts.

The caste politics around Thevar Jayanti is not restricted to Madurai or other southern districts of Tamil Nadu with high concentrations of Thevars. “[They] have considerable strength for a caste community in the Assembly and are given regular ministerial positions. Other dominant backward castes receive similar attention,” says Rajangam. Every state government, he explains, tries to please caste groups that are not committed to either the DMK or AIADMK, the state’s two dominant parties. They make for valuable swing votes in tight elections.

The violence between Thevars and Dalits continues to intensify, inflamed by political parties doling out money and the government encouraging their celebrations. So brazen is this that State support of caste identities is now regarded as the norm. Sample this: ‘For the last 37 years, I have attended the celebration of Thevar Jayanthi, except for the four years I was in jail,’ declare posters across Madurai of MDMK leader Vaiko. Current Chief Minister J Jayalalithaa of the AIADMK has visited Pasumpon many times (this year, she paid her respects to the late Thevar leader in Chennai). Regional TV news channels make it a point to air footage of all important leaders bowing before Muthuramalinga’s idol.

Madurai, with a high population of Thevars as well as Dalits, is perhaps not as ‘modern’ as Chennai in blending castes. It has its bustling coffee shops and malls, an international airport and a few renowned educational institutions. That such a city can, in an instant, be overrun by sickle-wielding caste maniacs is a reality both residents and non-residents prefer to overlook. But behind the modern façade is a bloody history of violence. With the success of a recent state-wide bandh called by Thevars to protest violence against them, with efforts to name the airport after Muthuramalinga, and with Dalits demanding state sponsorship of Sekaran’s Guru Puja as well, Tamil Nadu is a prime exhibit as a jaathi-veri (caste-fanatical) state.