VS Achuthanandan may be the CM of Kerala, but real power in the state rests with Pinarayi Vijayan. Will he survive the Lavalin scandal? 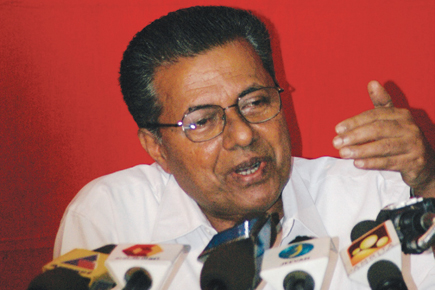 VS Achuthanandan may be the CM of Kerala, but real power in the state rests with Pinarayi Vijayan


Pinarayi is a small village in Kannur in North Kerala. The soil in these parts is a shade of red and not just because Vijayan was born here, the youngest of a 14-strong brood fathered by a toddy tapper. At regular intervals, Pinarayi has been the battleground for violence between the Marxist party—whose general secretary Vijayan has been since 1998—and the RSS.

Vijayan was a minister for power for two years from 1996 to 1998. One of the things he did in this brief period was to sign a deal with Canadian firm SNC Lavalin to modernise three hydro electric power plants in Kerala. The contract was worth Rs 374 crore. A condition, but not a binding clause, was that the firm would arrange to fund a cancer hospital in Malabar, Vijayan’s home turf. The amount tossed about was Rs 98.3 crore. The company ended up paying only Rs 9 crore, which apparently has not been accounted for.

Normally, it should have been the state government headed by 84-year-old VS Achuthanandan—both comrade in qualms and cussed foe to Vijayan—asking the CBI to proceed against Vijayan. But that this was initiated by the Governor, RS Gavai, is an indication that the waters Vijayan finds himself in are deep.

The CBI charge sheet against him includes undue haste in signing the deal—there was, for instance, no global tender—lack of transparency, not keeping the cabinet in confidence and not seeking the technical board’s advice.

It’s only in a political Disneyland like Kerala that a doctrinaire CPM will sign a deal with a foreign firm and expect it to fund a cancer hospital to the tune of over one-fourth of the whole deal.

The decade-old Lavalin case might have been a serial comedy, but for the fact that Vijayan is normally a sharp, clever and fearsome leader. He is not a man who makes too many mistakes. No other CPM party leader in the history of Kerala, starting with Krishna Pillai, AK Gopalan and EMS, comes across as so adept at cut-throat street politics. And no other leader has contributed so much to the impoverishment of the party’s imagination.

Theoretically, under Vijayan’s leadership, there has not been a single position paper of substance that might shed some light on the contemporary reality of a state that swears by communism even in the face of a visibly depleted labour force. If there will ever be a revolution in Kerala, the workers will vote it in by mail from abroad.

Under Vijayan, the commercialisation of communism has flourished. The CPM now owns a profitable TV channel, hundreds of crores worth in real estate and institutions. Achuthanandan may be the CM, but real power rests with Vijayan. The Lavalin case, which refuses to go away, is one way of reining him in. And the chances are, given Vijayan’s access to resources and his hold over the Delhi-based Politburo, he will come out unscathed.

The real question though is not whether Vijayan will survive this scandal. It is whether the CPM in Kerala will survive Vijayan. He is only 65. He has another 20 years to win the Battle of Lavalin and lead his party to defeat.