Sai Baba as a Professional Hazard

The perils of tracking the godman’s life, influence and miracles as a journalist 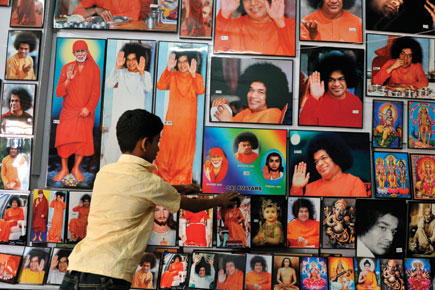 The perils of tracking the godman’s life, influence and miracles as a journalist


Every profession has its challenges if not stress tests. For journalism in India, we suggest this: trying to keep your copy straight while covering a godman. From jet-setting brahmacharis to sex gurus, from babas kick-blessing disciples to Naga sadhus in the buff, you can have your pick of divinely inspired performers doing their own version of the Great Indian Rope Trick. But if you really want to earn your spurs, you’d have to cover a godman with millions of devotees in a militant if momentary frenzy.

The dare of the moment is Sathya Sai Baba, who, according to doctors at his trust’s hospital in Puttaparthi, left his body at 7.40 am on 24 April. He’s one godman with a following so disciplined that a military general would envy it, so full of famous figures that a VIP list for a World Cup final would be put to shame, so zealous that the blasphemy police of the Subcontinent’s far frontiers could take tips from them.

Earlier this month in Puttaparthi, I phoned a district reporter for a local perspective on the godman. “Are you writing negative or positive things?” he demanded. “Just writing facts,” I responded. “What kind of facts are you looking for?” he asked. His tone suggested that the facts would have to be approved by the faithful.

The godman’s charitable healthcare and potable water projects are ‘facts’ met with approval. Any mention of his hairstyle, adopted as a teenager when he declared himself an avatar of Shirdi Sai Baba, is met with disapproval. Talking about the physical attributes of a man in saffron robes—and thus spiritually disengaged from his worldly body, something that also makes cremation redundant—is a strict no-no. I learnt this in 2001, when I was ticked off by a devotee, V Balu, for an article I’d written in a weekly with his help: “It’s a good article. We appreciate it. But, we didn’t like the use of the term ‘fuzzy-haired Baba,’” he told me. I didn’t ask him who ‘we’ were, but it was obvious that the godman had rings of protection around him whose opinions held a hint of menace for writers who took note of hairstyles.

I suspected that even Balu, despite his stature as a collage artist, had never had a one-on-one conversation with Sai Baba. Perhaps their eyes had met at a darshan. In my experience, people who say “Baba told me…” are speaking of having been instructed by the godman in their dreams. Evidence of their spiritual upliftment is equally scarce; or it escapes me at least. “You must try to understand the meaning of your life—ask Baba,” a friend had once insisted, coaxing me to attend a bhajan session. Instead of a devoted bunch of bhajan singers spreading universal love and bliss, I found the experience stifling to say the least. The leader was a stern man; he would not tolerate a word out of place, let alone a drumbeat gone awry. Offenders would be glared down to cosmic nothingness.

Of course, there are Sai Baba devotees in high places. Like Freemasons, who run a worldwide secret society complete with a special handshake and codes of morality veiled in allegory and illustrated by symbols, these people seem to know and recognise one another. They somehow manage to connect, via means both holy and otherwise. Once, a senior journalist asked me to help contact a customs officer. A neurosurgeon from the US was giving it all up and joining Baba’s super speciality hospital in Bangalore: “He is bringing some important life-saving equipment—could Customs exempt duty on it?” This was 2002, when duties were rather high. I thought it an absurd idea, but the customs officer was a Sai Baba devotee and obliged gleefully. I later gathered that the officer, a deputy commissioner, personally escorted the doctor and his family on their way to Bangalore airport. If faith can move mountains, what are a few customs’ barriers?

If membership of Sai Baba’s club can open doors, it can also slam them shut, as I learnt at the 2001 Aero India show, to report on which I needed passes from Hindustan Aeronautics Ltd, once seen as a place for rocket scientists. The company’s assistant general manager, in-charge of issuing media accredition, seemed affable at first. Once I introduced myself, he ushered me into a cabin, listened to my request patiently for five minutes, and then declined it. The man had this to say: “I cannot approve your application because you are from a web newspaper. I could have considered your case and accommodated you, but I am not going to do that, as you are from the India Today Group” (as I was then). The weekly had recently carried a shocking story with allegations of child abuse against the godman. This was too much for the manager. “How could your magazine discredit someone who millions including presidents and prime ministers look up to for divine salvation?” That was that.

Writing on Sai Baba apparently has its own rules of engagement. And devotion to facts is not among them. Once, at a Sai ashram near Bangalore, a man with a knife was nabbed trying to get close to Sai Baba. He was overpowered, but the police were convinced that all he wanted was to touch Baba’s feet—and the knife was just an aid in forcing his way through. While reporting the incident for a newspaper, we had touched upon an earlier attempt on the godman’s life in Puttaparthi (six people, including four purported knife-wielding attackers, were killed by police guards). Sai Baba reacted angrily to the report, issuing a long sermon in chaste Telugu on the ‘mischief’ that media gets up to. By the end of it, the congregation nearly had their fists clenched; media colleagues who were present told me that if not for Baba’s presence, they would certainly have been attacked.

Thankfully, violence is a no-no for Sai Baba’s disciples. But that does not necessarily make it unlikely. Outside the hospital where the godman lay ailing in an ICU ward, I suggested to a TV reporter that he run a sting operation for an insider story. “If I get in there,” he replied, “I will not get out alive.” He was only half joking.

The swarms do not like anyone falling out of line. In the late 1990s, I was sent to Sai Baba’s Whitefield ashram for a clarification on a story my newspaper was working on. I knocked on the door of the administrator, asking if I could come in. He nodded. I took a step inside and he gave me a withering look, shifting his gaze in quick succession from my eyes to my feet and back. I understood I had to take off my shoes; I was about to enter some sort of sacred space, at least to his mind. “Is socks okay?” I asked. He didn’t care to reply. I walked in nevertheless. A few minutes of conversation was all we had. His attitude smacked of an unsaid, ‘We are backed by the powerful, you are a fly on the wall.’

Needless to add, flies on the wall do not question the godliness of someone who can produce vibhuti (sacred ash) from thin air. There are also tales of ash falling from framed photographs of Sai Baba. As miracles go, this does not have the popular appeal of, say,  Ganesha idols drinking milk. But with the godman no more, hushed whispers of a bitter battle within the Sai empire for control of his legacy, and millions of more framed photographs going up on walls, you can be sure no one will bother to check if this ash-off-the-frame is the handiwork of termites. In any case, it would not meet with approval.