As the Maoists assert control in this adivasi region, the West Bengal government faces a dilemma: to storm Lalgarh or not 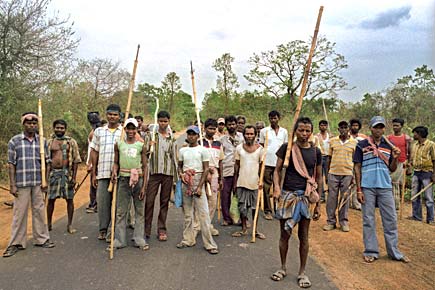 As the Maoists assert control in this adivasi region, the West Bengal government faces a dilemma: to storm Lalgarh or not


THE LARGE gates of the police station at Lalgarh are always locked. There are a few mine-proof jeeps and mini-trucks parked in an otherwise desolate compound. Nervous cops peer suspiciously out of barricaded windows of the two-storied, decrepit structure. They rarely step out of the police station, and when they do, it’s always in groups to buy provisions from the market. They don’t register FIRs, investigate crimes or arrest anyone for them. It’s tough enough watching out for themselves.
All this, just 180 km west of Kolkata, in Bengal’s West Midnapore district, where Lalgarh is the headquarters of an administrative block called Binpur-I. Dominated by tribals and infested with Maoist rebels, the block has more than 150 villages and nearly 94,000 voters.
It was early November last year that the tribals erupted in anger over arbitrary arrests and horrendous atrocities by the police. The men in uniform were acting in response to a blast in the area that damaged a police escort jeep of Union Steel Minister Ram Vilas Paswan, but was believed to have been aimed at Chief Minister Buddhadeb Bhattacharjee who had passed by that spot just minutes earlier.
“But what the police did in November was nothing new for us. We Adivasis have been beaten up, tortured, killed, and our women molested and raped since the early 1990s, when the police started operations against Maoists here. Things turned worse after the CRPF was inducted in 2002. But this time, the police atrocities were the proverbial last straw on the camel’s back and the people revolted,” says Chatradhar Mahato, leader of the People’s Committee against Police Atrocities (PCPA) that is spearheading the anti-police movement of Lalgarh.
In protest against police brutality, the Adivasis dug up and blocked roads, cutting the area off from the rest of the world until 7 December. “We [have] lifted the blockade [since], but won’t allow the police in till they seek a pardon from us and regain our trust and confidence,” adds Mahato, whose brother Sasadhar is a Maoist leader. Their anger is directed not just at the police, but also at CPM leaders and workers (many local Marxists cadres have resigned from that party in fear).
Attempts by the police to enter Lalgarh and re-establish their writ have been met by stiff resistance, and 14 people, seven of them PCPA and six CPM members, have been killed in sporadic clashes since November. The state government, understandably, is apprehensive of sending in more police forces to restore its control. “The PCPA will use women and children as human shields to block entry of the police, and if force is used, many lives could be lost. But things cannot be allowed to continue like this. The rule of law has to be re-established,” says Ardhendu Sen, state home secretary.
Taking advantage of the foot-dragging in officialdom, Maoists have strengthened their presence not only in Lalgarh, but also neighbouring districts like Purulia and Bankura, where the PCPA has spread its tentacles. Though Chatradhar denies it, police top brass assert that the PCPA has close links with Maoists. “Many youngsters have been recruited by Maoists from Lalgarh and neighbouring areas, where the PCPA has struck roots. Maoists are stockpiling weapons at Lalgarh,” according to IG, law & order, Raj Kanojia. This is worrisome, since the ‘red corridor’—which cuts through vast swathes of territory in Chattisgarh, Madhya Pradesh, Bihar, Jharkhand, Orissa and Andhra Pradesh—would then extend to West Bengal as well.
Senior police officers acknowledge that any delay in reasserting control in Lalgarh might let the entire belt slip away. For now, the fear of Adivasis being killed indiscriminately has held the police and para-military forces back. But the self-restrain won’t last long, especially with an election due. Bows and arrows, Chatradhar acknowledges, are no match for police firearms. “We’ll get killed, and the world will see the true face of the CPM government in Bengal once again after Nandigram,” he says, by way of caution.
That is precisely what Buddhadeb Bhattacharjee fears: another Nandigram waiting to happen in Bengal. And this is not all that is giving the CPM sleepless nights.