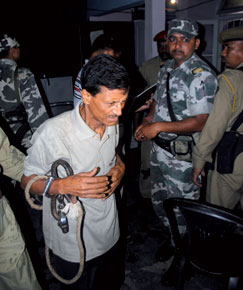 
When senior Maoist leader Anukul Chandra Naskar alias Pareshji was arrested on 9 May in the Barak Valley of southern Assam, it came as no surprise to security agencies. They had been tipped off about Naskar’s movements by another senior leader, Aklant Rabha alias Maheshji, arrested along with his deputy in Assam on 26 April. The arrest of two senior Maoist leaders—both of whom are part of the central committee, the highest decision-making body of the CPI (Maoist)—in the span of a fortnight is an indication of an increased Maoist presence in the Northeast, especially in the Tinsukia, Dhemaji and Dibrugarh districts of upper Assam along the border with Arunachal Pradesh.

The Northeast has been a focus of Maoists since the mid-2000s when the late Maoist leader Kishenji visited the region to forge ties with insurgent groups there. Kishenji is believed to have travelled to several places, including Manipur, where he set up agreements for training and arms procurement with insurgent groups, including the Manipur-based People’s Liberation Army (PLA). According to an Intelligence Bureau (IB) report accessed by Open, the first contact between the PLA and the CPI (Maoist) occurred in 2005 in Nepal. The report also reveals that a special observatory team of the PLA had visited Jharkhand in May-June 2009. In August 2011, four military and one communication expert from the PLA travelled to the Saranda forests in Jharkhand to hold a training programme, but it was disrupted by logistical problems and the heavy presence of security forces in the area. This was revealed by three PLA cadres arrested in Delhi in October 2011.

Maoists are keen to establish new guerilla zones beyond Chhattisgarh, Jharkhand, Orissa and Maharashtra. Due to sustained military operations, Maoists in these areas have recently been under a lot of pressure. Intelligence agencies believe that the eastern bureau of the CPI (Maoist) has been assigned the task of expanding in the Northeast. In April, the Union Ministry of Home Affairs sent a detailed letter to 13 states, asking them to be alert on Maoist activities. The six-page letter clearly says that Maoists have been trying to expand their influence in the Northeast to strengthen their eastern bureau and to ensure a steady supply of arms and ammunition.

The alarm bells started ringing in October 2010 when Anthony Shimray, ‘foreign minister’ of the Naga insurgent group National Socialist Council of Nagaland (I-M), was arrested at a Patna railway station by sleuths of the National Investigation Agency (NIA). Based in Bangkok, Shimray, who happens to be the nephew of Naga insurgent leader T Muivah, had been responsible for procuring arms from China. Just before his arrest, Shimray had made an advance payment of $800,000 to a Chinese firm for sophisticated weapons, including rocket launchers, and communication equipment. Such consignments travel from China to Myanmar and Bangladesh, where they find entry into the Northeast. Some of these arms would ultimately reach Maoists. During his interrogation, Shimray is believed to have told the NIA that the Chinese agents had even offered him surface-to-air missiles, along with free training on how to operate them. The deal did not work out because Shimray did not have adequate funds. A month after Shimray’s arrest, Maoist leader Sandeep Chongdar alias Kanchan was arrested in Kolkata, and a cache of modern communication equipment, believed to have come from China, was recovered from him. It was through him that these weapons were to reach Maoist zones in Jharkhand and elsewhere. Since then, the Maoist leadership has increased its efforts to expand in the Northeast so that such procurements of arms become easy.

The IB report also says that Maoists are willing to buy from the PLA old heavy weaponry like medium machine guns and mortars. It also reveals Maoists making an advance payment of Rs 33 lakh (out of a total Rs 50 lakh) for a weapons consignment that included 3,000 rounds of AK-series ammunition, two wireless sets, two satellite phones and 15 Sony radios. In December last year, another senior Maoist leader, Anil Kharwal alias Ananji, was arrested at a lodge in Assam’s Tezpur.

He told his interrogators about plans to hold a major training camp for Maoist guerillas in the jungles of Arunachal Pradesh in January 2013. “After his arrest, Rabha was sent to set up this camp,” said a senior Assam police official. In the last two years, many more Maoist leaders have been arrested in Assam. In February 2011, former ULFA militant Aditya Bora was arrested at the Orissa-Jharkhand border on charges of being a Maoist. He was later released on bail and has since gone underground. In June 2012, one of his close associates, Pallab Borbora, was arrested in Assam’s Golaghat district. Intelligence agencies believe that Aditya Bora is recruiting youngsters who are being trained in the jungles of Arunachal Pradesh. Around 200 youth are already believed to have joined the Maoist fold in this area. According to police sources, they are even given a monthly stipend of Rs 2,500.

The biggest worry for security agencies remains the support of Maoists by ULFA chief Paresh Barua. In a recent interview, Barua said that his organisation has a ‘tactical understanding’ with the CPI (Maoist). Many youth who were once with ULFA and now have nowhere to go end up joining the CPI (Maoist). In the past, says a senior intelligence officer, Maoists have tried to build inroads among workers in the tea-growing districts of Assam. Now they are concentrating on areas along the Assam-Arunachal border, inhabited by many Backward communities. A recent report by India’s parliamentary Standing Committee on Home Affairs said that ‘certain groups are operating in Assam and Arunachal Pradesh and have been involved in incidents of looting of weapons and extortion from local villagers.’ According to a classified report submitted to the Union Home Ministry, Maoists have managed to create a stronghold in the Sadiya subdivision of Tinsukia district. This area is surrounded by densely-forested Himalayan mountains and one has to take a ferry across the river Brahmaputra to get to it. On the other side, it is connected to Arunachal Pradesh. A 2011 report by the Guwahati-based Centre for Development and Peace Studies reflects how grossly underdeveloped this area is. According to that report, the Assam government did not appoint a Block Development Officer here for three years. There had been no Child Development Project Officer, and a mini primary health centre inaugurated in September 2011 was yet to get a doctor and was at the time run by a pharmacist. (The sub-division, according to the 2011 census, has a population of 120,000.)

The same report quotes a note prepared by the Deputy Commissioner of Tinsukia, arguing that the district needs immediate attention due to factors such as the ‘presence of many anti-social elements and frustrated unemployed youth or under-employed youth who breed such elements’ and the ‘prevalence of support for militancy and presence of militants in certain areas.’

In December last year, Union Rural Development Minister Jairam Ramesh asked the Centre to declare Tinsukia and Dibrugarh districts ‘Maoist-affected’. Since then, an anti-Maoist police squad has been pressed into service in this area. But there are no indications that other factors like lack of development will receive any attention. That is one lesson New Delhi has so far not learnt from its engagement with Maoists.