While the CPM admonishes Sitaram Yechury for the Congress tie-up in West Bengal, sympathetic comrades worry about staring at oblivion 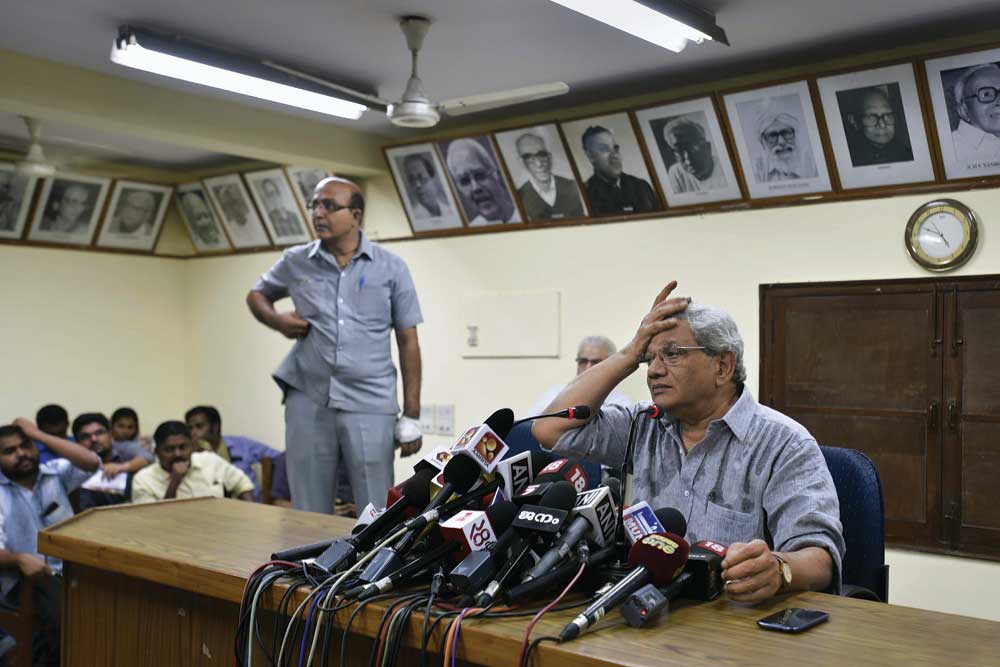 FOR AN ANIMATED conversationalist, Mohammed Salim, member of the CPM Politburo and a confidant of party General Secretary Sitaram Yechury, is unusually tight-lipped about the recent goings-on at the top of the country’s biggest Left party. “I have nothing more to say than what is already there in the communiqué issued by the party following the meetings,” he tells Open in an apparent admission of the huge setback he and his leader received over the party’s political alliance with the Congress that he and others like Surjya Kanta Mishra had helped forge in West Bengal for the recent elections which saw the combine suffer a humiliating defeat.

Yechury, who got elected as the CPM chief a year earlier in the face of stiff opposition from powerful state units like the one in Kerala which had backed S Ramachandran Pillai for the coveted post, owes his ascent to the West Bengal unit, once a powerhouse in the party scheme of things. “That explains why he wanted to ensure the CPM in the state was in one piece and went for a poll understanding with the Congress. Many Kerala leaders understood the importance of such an alignment. Without the pact, [the Trinamool’s] Mamata Banerjee would not even have allowed CPM workers to campaign in the state. It was the Congress factor that worked to our advantage,” argues a senior CPM leader from West Bengal, who, like Mishra, continues to justify the alliance even after its rout. This time, though, he doesn’t want to be named because he doesn’t want to be seen as defying the party line.

The ‘party line’ is an expression as old as Lenin, and in Communist politics, it is the Lakshman Rekha that cannot be violated. In recent high-level meetings of the CPM—that of its Politburo and Central Committee—Yechury was under sharp attack for having backed an alliance that went against the party’s political- tactical line adopted at the 21st triennial Party Congress, the highest decision-making body of the CPM. Yechury had to yield to pressure as a brute majority of the Central Committee as well as a sizeable chunk of the Politburo reviewed and castigated the poll tie-up with the Congress in West Bengal, a plan that he had fought tooth and nail for. At the end of the meetings, the party issued a statement which was, according to a senior Central Committee member, a tight slap in the face of Yechury himself. ‘The Central Committee concluded that the electoral tactics adopted in West Bengal were not in consonance with the Central Committee decision not to have an alliance or understanding with the Congress,’ it said. The CPM meetings also decided, much to the anguish of Yechury and his camp, to ask the West Bengal state unit to ‘rectify’ the party line’s violation. A few of the state’s leaders Open spoke to say that the central leadership is fully aware that no decision can be final without taking the state unit also into “confidence”. One of them says, “Which is why the phrase, ‘in consonance with’ was used in place of ‘violation’ of the party line.” He adds that while the unit has no business questioning the collective leadership of the party, it had argued vehemently at the meetings that “without the party, there can’t be any party line”. This was a reference to a spate of attacks on CPM cadres across the state, unleashed by workers of the ruling Trinamool Congress (TMC) party. Many CPM workers have died in political clashes across the state following the party’s defeat in the 2011 Assembly polls in which the Banerjee-led Trinamool unseated the CPM, once considered invincible, and ended its 34-year rule in the state. When the CPM-led Left Front was in power, it was TMC leaders, including Banerjee, who had to face violence at the hands of CPM workers.

Contacted by Open on the phone, Mishra, CPM’s West Bengal state secretary and its chief ministerial candidate in the run-up to the polls, refuses to comment on how his party hopes to rectify the violation of the party line. “It is just a face-saving expression and a mild warning. Nothing will come of it,” says a senior leader from Kerala. Mishra also says he has nothing to say beyond what the party had made public. Mishra, considered the key architect of the pact with the Congress, suffered a spectacular defeat in the Narayangarh seat in West Midnapore, an Assembly constituency he had represented since 1991. On 19 May, when the results of the West Bengal polls were announced, TMC won 211 seats in the 294-member state Assembly, leaving many leaders humbled, including Salim, who had been rather zealous in cobbling a ‘jot’ (tie-up) with the Congress despite the opposition of several senior party leaders. The Congress-Left alliance could secure only 76 seats.

For the CPM, which hoped that the West Bengal elections were an opportunity to mobilise its dispirited cadre, the loss has opened a can of worms

For the CPM, which hoped that the elections—held under the watchful eyes of Central forces and the Election Commission— were an opportunity to mobilise its dispirited cadre, the loss has opened a can of worms. Yechury’s detractors—the likes of former General Secretary Prakash Karat and Pillai—have charged him with sacrificing the party’s values to warm up to the Congress. The CPM was founded in 1964 by leaders who walked out of the CPI’s National Council over their opposition to any truck with the Congress party. Within a decade or so, after having supported the Congress during the Emergency, the CPI ended up being a fringe player in Indian politics while the CPM, under the baton of leaders like Promode Dasgupta, P Sundarayya, Ak Gopalan, EMS Namboodiripad and others, began to flourish as an electoral force of the period. The CPM began to decline as a national party only after Karat took over from Harkishan Singh Surjeet in 2005. Interestingly, until he was named to the post last year, Yechury, Karat’s key rival in the party, had often targeted the former’s policies for contributing to its fading electoral appeal; over Karat’s stint as party chief, the CPM’s Lok Sabha tally had fallen from 43 to nine.

Meanwhile, a section of Kerala party leaders contend that Yechury had ‘mishandled’ organisational issues in the state for long by associating himself with party veteran VS Achuthanandan, ‘as part of a plan’ to question Karat’s leadership. One of them says he is glad that Yechury no longer resorts to “such mischief” now that he is general secretary. “We are happy with the way he has handled succession issues and the choice of Pinarayi Vijayan as the new Chief Minister with great ease. But at the same time, we cannot in anyway condone what he has done in West Bengal, by letting the state leadership get into a full-fledged alliance with the Congress. I fully agree that the state unit has to be consulted fully well before decisions are taken, but going with Congress will always be a suicidal affair, as it had happened with CPI in the past,” says a Politburo member from the state. “If CPI could drag itself into political oblivion despite an array of tall leaders at its disposal at the Centre,” this member asks, “what would happen to a state leadership that is suffering from a leadership crisis?” Many feel that Mishra, a doctor by profession, lacks the charisma of his illustrious predecessors in the party.

Besides, it is an irony that Yechury, as general secretary, failed to uphold the political-tactical line adopted at last year’s conclave of the party which marked a departure from the stance taken by the CPM in 1978. The party had decided not to work towards forming a ‘third front’, a grouping of non-Congress, non-BJP parties with which it had associated itself for long. The contention at the Party Congress was that the Left Front, its biggest constituent being the CPM, had lost its ‘credibility’ by associating with parties— regional or otherwise—that had embraced liberalisation and earned a bad name for being corrupt.

At the recent high-level meetings, Yechury had to face criticism over distancing himself from the party line. According to a report, KK Shailaja, a Central Committee member from Kerala, demanded that action be taken against him. Meanwhile, the CPM sacked a leader from Haryana, Jagmati Sangwan, who has campaigned tirelessly against atrocities committed by khap panchayats in the state, after she resigned from the Central Committee in protest against the panel not taking any action against those who had violated the party line. She was dismissed from the primary membership of the CPM for indiscipline.

For his part, Biman Bose, the former CPM state secretary and party heavyweight based in Kolkata who had vociferously fought for Yechury’s elevation as general secretary and also for the local Congress tie-up, says that he won’t speak to reporters over the phone. “I have this strange habit that though I know a person, I won’t comment on politics to that person on the phone,” he says, “and I want to die with that habit.” Some of his colleagues in the state unit allege a conspiracy against Yechury by “certain elements” in the party to ease him out.

Their point, as they reiterate, is that a party line is worthless when there is no party left.