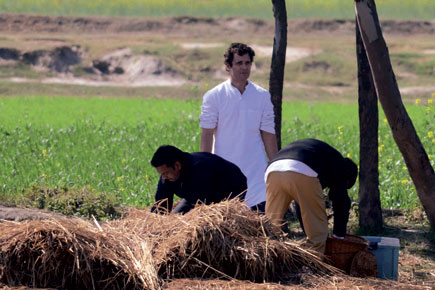 
When Rahul Gandhi began his experiment with internal democracy in the Congress soon after he entered politics with the 2004 Lok Sabha polls, he alarmed many members of the party. They feared this would dissolve a party structure based on loyalty from top to bottom and from one wing to another. Now, five years after he organised an internal election for the Punjab Youth Congress, the unit’s first ever, the 43-year-old vice-president of the party seems to have abandoned the idea.

In an exercise to reorganise the party in his parliamentary constituency Amethi that concluded on 18 September for the most part, there was no trace of any election whatsoever. The last time Amethi saw a reshuffle of roles was 11 years ago, and most office bearers of the Congress in the constituency had held the same posts all these years. That was 2002, several years before Gandhi sought to position himself as a politician who stood for changing politics—particularly within the Congress—by letting leaders emerge and rise on the basis of free and fair internal elections.

Consider the Amethi exercise. It began a few months ago when senior leaders of the All India Congress Committee and Pradesh Congress Committee got together to shortlist three candidates each for 17 blocks and five town areas in the district. On 23-24 July, Rahul Gandhi and his sister Priyanka Gandhi interviewed these aspirants for assorted party posts. On 18 September, the party announced its names selected as members of the district committee and as party presidents of various blocks and town areas. “Now the major part of the party’s reorganisation in Amethi is complete,” says Indra Pal, one of the three candidates interviewed by the Gandhi siblings for the post of Deeh block’s party president. “Instead of giving that post to one of [us three], the central leaders decided to appoint someone else as president of this block,” says Pal, “The leadership’s choice is acceptable to all. There is no resentment or confusion whatsoever.”

Pal, a Dalit leader of the party in Deeh, was not disappointed. “When the decisions came, I was surprised,” he says, “…not because none of the three candidates interviewed that day could make it, but because I came to know I’d been made a member of the district committee. I was not even interviewed for that.”

“It was neither an election nor a selection,” says Digvijay Singh, a local Congress leader in Amethi, “Whatever [Rahul Gandhi] thought fit, he did.”

Indeed, Deeh is not the only block where the selection seemed to follow no preset process. The story of two other blocks, Valdirai and Bahadurpur, was similar. The Congressmen who were declared party presidents in these blocks had not even appeared before the Gandhi siblings during their 23-24 July marathon interview sessions.

“These cases go even beyond the principle of selection to fill any post,” says another Congress leader of Amethi, “Even if you consider them exceptions, the reorganisation of the party in Amethi still marks a shift from Rahul’s strategy to that of Priyanka, who has created in her own way a party structure based on loyalty in Raebareli.” The presence of his sister by his side for the interview sessions, therefore, was only natural for the party vice-president.

That shift may surprise those who thought Rahul Gandhi had internalised the need for internal democracy in the party so much that it would be difficult for him to give up on elections. Five years ago, he had made it a key part of his reform agenda for the party. His efforts appeared earnest and he was not expected to revert to handpicking office bearers—an established practice in most parties that he had opposed—the moment it came to his own constituency.

Though Rahul Gandhi is yet to make a statement on this shift, the signals from Amethi suggest that he has understood that his internal democracy idea might not be a staging-post for a rejuvenation of the party’s internal structure. Instead, some suspect, it might even herald the end of all that the party has in the name of a structure. This suspicion is reason enough for him to explain himself.

After all, the recent move constitutes the antithesis of all that Rahul had been saying and doing since he joined his mother, Congress President Sonia Gandhi, in the arena of politics. All along, he has insisted on change through a process of political inclusion that would level the party’s playing fields. The long-term project he had set for himself of transforming the party’s organisational systems, first by democratising the All India Youth Congress (AIYF) and then the National Students Union of India (NSUI), was a significant departure from the manner in which the party was managed in the past. For, none of its leaders thus far had shown much enthusiasm for changing the party’s top-down style of centralised functioning.

Rajiv Gandhi may have denounced “brokers of power” who “dispense patronage to convert a mass movement into a feudal oligarchy” in 1985, about a year after he became India’s Prime Minister, but he could hardly take any concrete step to end that tendency within the Congress. Sonia Gandhi, on her part, set up a series of committees to review the party’s structure and suggest corrective measures. All of them identified a distinct lack of internal democracy as the main culprit. Yet, the fear of upsetting the status quo has been so high that their reports got shelved by the leadership. It is to Rahul Gandhi’s credit that some concrete steps, even if small and marginal ones, started being taken to end the party’s malaise. In strictly political terms, his intervention might have been aimed at portraying him as a leader who intended to revolutionise Indian politics. “But that would have destabilised the Congress from within,” says a senior party leader who would like to stay anonymous.

The Congress, like most other political parties, is tightly controlled. It has traditionally thrived on the basis of an underlying structure formed through a chain of loyalties that converge at the top: specifically towards the Nehru-Gandhi family.

Of course, the party has a constitution, but it is followed more on paper than on the ground. Many Congress leaders will claim that even if the principle of election is not always followed strictly, the party still functions democratically, that it is a two-way process and that party leaders take decisions only after listening to the opinions of other members. In one crucial sense, this is perhaps true. In many cases of selection, a two-way process does indeed take place—or at least appears to have. But a selection is still a selection, with everything arbitrary that it implies. A leader knows that his survival within the party directly depends on support from atop. The principle of election is all about turning that upside down: with support from below no less significant than that from above.

Rahul Gandhi’s words and actions all these years have suggested that he sees value in opening up the party to a wide set of voices and opinions at various levels. But he perhaps failed to reckon with an intangible element of the party, one that is not unique to it: the sense of loyalty that determines the party’s inner structure. It cannot be identified and marked out in black-and-white, but it exists and appears to have nudged Gandhi along, as it did his father before him.

For better or worse, this may well be the beginning of a newer Rahul Gandhi, less idealistic and more pragmatic, even if it means sacrificing what has so far been a central plank of his politics.