Why on earth do Jats need the benefits of Reservation? 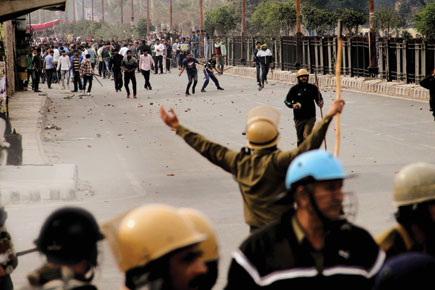 Nine of Haryana’s 12 chief ministers since the state’s formation five decades ago came from the politically powerful and relatively well-off Jat community, and the fresh demand for Other Backward Class (OBC) status for the caste group—a call that lacks justification— has led to the wanton destruction of public and private property as Jat mobs went on a rampage, looting and torching shops owned by other communities and wreaking havoc that has crippled water supply to several parts of Delhi.

Ironically, a third of the land in the state—where normal life has come to a partial halt thanks to the ongoing agitation— is owned by Jats, who account for about 22 per cent of its population. Not only are they highly vocal, their social dominance is evident in almost every sphere. In the state Assembly, close to a third of the people’s representatives are Jats. While most are farmers, their land holdings being bought over for urbanisation has assured large numbers of them a spurt of prosperity over the past two decades. The large SUVs that many are seen travelling in, say social observers, are merely the latest means adopted to assert a sense of superiority. As land prices skyrocketed in areas around Delhi where new townships came up, their fortunes increased, resulting in a phenomenon that entered the corporate lexicon as ‘boomtown Sonepat’.

It was here in Sonepat, one of those small towns where farmers are seen using high-end SUVs to carry farming equipment, that a few protestors have died in clashes with security forces. Call it a paradox: Sonepat is also one of the nerve centres of the agitation that saw mindless acts of vandalism.

In 2015, the Supreme Court flatly rejected the UPA’s move to include Jats in the central list of OBCs. A similar order by Haryana’s previous Bhupinder Singh Hooda government was cancelled by the Punjab & Haryana High Court. The National Commission for Backward Classes (NCBC) turned the demand down not once but twice. And for good reason, not least the invalidity of their claims of facing systemic discrimination in employment and educational opportunities.

Yet, this February, Jats in Haryana— with Rohtak and Jhajjar districts serving as the fulcrum—brazenly engineered a state-wide conflagration to wrest reservation quotas in educational institutions, apart from government and public sector jobs. They resorted to arson and violence, causing disturbances that resulted in the loss of life as well as thousands of crores of public money. They forced industrial hubs shut and threw schools and hospitals, shopping malls, public transport, work spaces and businesses completely out of gear, gutting several to the ground.

Agitators even choked a canal supplying water to Delhi, and jammed National Highway 10 that leads from the capital to Himachal Pradesh, Punjab and J&K in their quest to hew out a chunk for themselves of the country’s affirmative action policy that was originally meant for far more socially disadvantaged and historically downtrodden communities such as Scheduled Castes and Tribes.

Unlike Gujarat’s Patidars, who erupted last year in protest demanding that either they be given reservations or the quota system be scrapped altogether, Haryana’s Jats are pitching an argument in various shades of grey. Agitation leaders contend that farming has become a victim of drastically diminishing returns and the youth of the community are being driven to compete for private sector jobs in cities without a safety net to break their fall.

In the end, the Government capitulated to what was clearly a twist of its arm, setting up a committee headed by a senior Union minister to shape the contours of a quota for Jats in Haryana. Apprehensions have heightened since that Jats across the north will now cite the precedent to demand formal inclusion in an already overstuffed OBC list.

The current round of this agitation has underscored again why 21st century India needs a new narrative on affirmative action that could freeze or even roll back caste-bound quotas in employment and education within a reasonable timeframe. The country needs a dialogue on whether keeping seats for communities that have begun to compete in a perception game of under-privilege has outlived its utility as a tool to uplift the needy. For this, we have to get rid of the canned speech on quotas and quota politics.

Delhi University Professor Satish Deshpande has argued that it is time now to “question the equation of reservations with the redressal of caste inequality not because reservation is no longer needed but because it is no longer enough”. Social scientist Yogendra Yadav, also in favour of looking beyond solely caste-based reservations, sees it as something that necessarily has to be a work-in-progress, especially when viewed through the prism of diminishing returns and socio-political developments (in the wake of Lalu Prasad’s second and third terms as Chief Minister of Bihar, for example). Affirmative action, Deshpande and Yadav contend, should no longer be based only on caste criteria, nor only for government admissions and jobs as in the past, but be expanded into a multi-pronged policy that actively discourages social, economic and other forms of discrimination against any group.

Deshpande argues that for upper castes to synonymise reservation with welfare programmes and benevolent handouts for the marginalised is grossly fallacious. Extrapolating from the Poona Pact between Gandhi and Ambedkar, he maintains that reservations were a covenant between the largely upper-caste movers of the Independence struggle and Dalits, a “good faith social contract” of sorts that involved the latter’s withdrawal of claims being made to a separate electorate. In lieu of guaranteed representation in legislative bodies, Congress leaders committed to do their utmost to expunge untouchability and caste-based discrimination. This was the ‘social justice’ model.

Understood that way, a policy of reservations for SCs and STs was at the core of India’s Constitution and not part of any agenda to win a constituency’s vote in the way freebies are used by those in power. Consequently, the question of when the quota system would end was deemed superfluous.

Fundamentally justified vis-à-vis Scheduled Castes and Tribes, however, the State’s affirmative action programme acquired completely different socio-economic and political contours once it was extended to OBCs. The OBC quota was a genie uncorked by the VP Singh Government of 1989-91, which implemented the Mandal Commission Report asking for such reservations. Yet, it failed to prop him up politically, outshone as his party was by opponents of the policy. But the OBC quota was there to stay, and it set off a race of rival claims by various other groups, a competition that borders on the farcical. Rajasthan’s Meena community, for example, jostled and elbowed its way into the ST reservation list on the strength of a typo after a state government notification that was meant to read ‘Bheel Mina’, referring to a community of that name. The state’s Bheel Minas had been granted ST status at the Central level and this was to be replicated at the state level. However, an official error led the notification to read ‘Bheel, Meena’, referring to two entirely different groups. The ensuing tussle between the two in court on the controversial issue assumed political proportions after Meenas threatened to go on a statewide strike if the state government did not officially clarify that ‘Mina’ and ‘Meena’ were the same and had equal access to reservation quotas in state government jobs and educational institutions. Rajasthan Chief Minister Vasundhara Raje buckled under the pressure. The Meena juggernaut was only stopped from claiming the same privileges of the Central government when the Judiciary refused to endorse a plan to legalise the interchangeablity of the two surnames.

What makes the current capitulation by the Centre to the Jats of Haryana somewhat inexplicable is that quota politics has not earned any party the lasting loyalty of Jats at the ballot box. The UPA lost their votes to the BJP in 2014 despite its last minute reservation notification covering nine states. So did the Congress state government of Hooda, paving the way for BJP’s Manohar Lal Khattar to assume power as Chief Minister.

Analysing the BJP’s emergence as a force in Haryana, known not long ago as ‘the GT Road party’ since it only had pockets of support in towns along this highway such as Karnal and Ambala, Yogendra Yadav points out that the party has managed to knit together a patch- work of social groups, even religious cults such as the Dera Sacha Sauda, to achieve electoral victory.

The Centre’s kowtowing to the aggressive demands of the Jat leadership in Haryana may have again kickstarted a familiar and dangerous cycle that the Supreme Court had halted by quashing the UPA’s notification granting OBC status to the community in nine states. That order covered Rajasthan, where Jats are indeed relatively backward on most socio-economic parameters (except in Dholpur and Bharatpur, once ruled by Jats). Issued against the earlier advice of the NCBC, that order was passed just a day before the dates for the 2014 General Election were announced, clearly with an eye on electoral gains. At the time, the apex court judges Ranjan Gogoi and Rohinton F Nariman dismissed the argument for a Jat quota, saying that it was not backed by compelling evidence. They stated categorically that while ‘caste may be a prominent and distinguishing factor for easy determination of backwardness of a social group’, such an identification could not be ‘solely on the basis of caste’. To boot, they made a case for the State to conduct a continuous evaluation to identify groups eligible for reservation, and to look beyond caste. Backwardness, they ruled, cannot be a matter of perception.

So, how did Haryana’s Khattar regime, near catatonic in its response to the Jat agitation, come to such a sorry pass?

Caste-based quotas can no longer be the elixir in a country that is home to such a vast number of youth who need both schooling and jobs. Quality enhancement in both education and employment, coupled with a sharp focus on merit, should now be fashioned by the State as the new core of its affirmative action policy to redress socio-economic discrimination. If every group portrays itself as disadvantaged and grabs a seat for itself on the quota gravy train, there may be no one left to pay the bills. It is a pity that some eminent India scholars and sociologists peddle untruths and spurious arguments to suggest that Jats deserve a quota in jobs because only a tiny percentage of their population has branched out to non-agricultural vocations. This logic is flawed because most Indians, irrespective of caste, are paid poorly. Choosing not to cash in on opportunities that arrive with money can’t be used an excuse to snatch away what is meant for the truly disadvantaged. Worse, unleashing the fury of an aggressive group to force the ruling government in the state as well as the Centre is beset with risks for opposition parties encouraging them. The Congress party, which has been looking for a come-back over the issue, should bear this in mind. Given that this stir has led to a polarisation along caste lines in Haryana, non-Jat votes will most likely go against the opposition party, which has come under criticism for re-igniting caste passions among Jats.