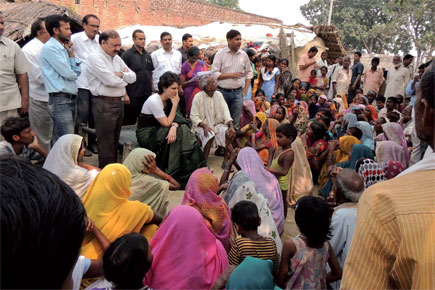 
For the past few years, while on visits to Rae Bareli, Priyanka Gandhi has been restricting herself to Congress circles alone, overseeing the party’s organisational set-up in this district of Uttar Pradesh and addressing public gatherings only during election time. Otherwise, she has opted to stay away from any interaction with voters—apart from promoting a few NGOs and women’s self-help groups—in her mother’s constituency. But these days, the picture looks surprisingly different. Her relationship with the Lok Sabha constituency of Congress President Sonia Gandhi seems to be undergoing a transformation, although in a subtle manner.

On 28 October, Priyanka Gandhi, for the first time, sought to reach out to voters at large in Rae Bareli. That day, she travelled through several villages, including Paho, Deogaon and Mithunkhera, making frequent stopovers to meet villagers.

The next day, on 29 October, she held a janata darbar at Bhuvemau guest house in the district, listened to the problems of locals and collected their applications and complaints in person. According to a Congress leader present, she met almost 300 people in all, in small groups, and assured them of all possible help.

In addition, she also met the party’s panchayat, block and district level functionaries and set out an agenda for them for the next two months. These functionaries were instructed to undertake padyatras across the area as part of an effort to spread word about the Union Government’s food security scheme, says the Congress leader present at the guest house. The party’s local leaders were also asked to target the state government for its failure to implement the Food Security scheme and poor implementation of other Centrally funded schemes, he adds.

This two-day exercise is a clear departure from Gandhi’s previous visits to Rae Bareli. During none of her past visits did she meet ordinary people in the constituency, as her focus was primarily on the functioning of Congress office-bearers and workers and reviewing the organisational structure of the party in the district. Also, this was her second visit to Rae Bareli in less than a month, a frequency generally not witnessed in her relationship with the constituency. She had visited Rae Bareli with her mother on 9 October, when the latter laid the foundation stones for an All India Institute of Medical Sciences (AIIMS) and other developmental projects in the constituency.

One could argue that this may well be an early launch of the election campaign in the Gandhi family borough. Gandhi’s latest visit to her mother’s constituency—despite being totally different in scope from her earlier visits—may well be part of her plan to give Sonia Gandhi time and space for her bigger roles in the party. With the high-stakes General Election due in April-May next year, the Congress President certainly needs all the time she can get to make an all-out effort for her party throughout the country.

That is certainly the argument being put forth in private discussions among some local party leaders in Rae Bareli. Another section, however, sees much more in Priyanka Gandhi’s venturing out of the party fold to meet villagers personally and hold an unusual janata darbar for voters in the constituency.

Indeed, her latest visit to Rae Bareli took place amid speculation that she will assume a greater role in the run-up to the 2014 General Election. Though the Congress has downplayed such speculation, the coincidence of these rumours of her expanded role with her reaching out to voters in Rae Bareli is too striking to be ignored. This is especially so because Priyanka Gandhi is seen by many within the Congress as reminiscent of her grandmother, India’s former Prime Minister Indira Gandhi.

That this is not a rumour cooked up solely by the media became clear few weeks ago, when the Allahabad Congress Committee passed a resolution inviting Gandhi to contest 2014 from Phulpur, which was once her great-grandfather Jawaharlal Nehru’s constituency. Though the Congress promptly took disciplinary action against its Allahabad unit office bearers for showing Sonia Gandhi as ill in party campaign posters while expressing support for Priyanka, the suggestion has survived and is still being debated in party circles.

If anything, the Allahabad party unit’s resolution is suggestive of a growing demand that Priyanka Gandhi should assume a larger role in the party’s affairs. Rahul Gandhi’s flip-flops on important occasions have earned him the sobriquet of a ‘reluctant politician’. It is also felt by a section of the party that, despite his aggressive campaigning in several states recently, he has by and large failed to revive the party’s fortunes. Priyanka Gandhi, on the other hand, is believed by many to be a more effective communicator than most Congress leaders. She is also more media savvy and could—they think—easily connect with women and youth.

According to a senior Congress leader, although the party lost most of the Assembly seats in Rae Bareli and Amethi in the last state polls in Uttar Pradesh despite Priyanka Gandhi’s best efforts, she has nonetheless maintained her appeal and charisma by keeping herself out of the spotlight. As for the charges of corruption against her husband Robert Vadra over his dubious land deals with real estate major DLF, the Congress leader says “that may not really become an issue. She could still help the party win back much of the lost ground.”

The first time Priyanka Gandhi entered Rae Bareli as a politician was in 1999. While campaigning for Congress candidate Captain Satish Sharma, she asked voters: “Would you support a person who stabbed my father in the back?” She was referring to Arun Nehru, the opposition candidate from the constituency. Sharma won and Gandhi’s visits to the constituency began.

In every Lok Sabha election thereafter, she has campaigned for her mother in the constituency, and in the state Assembly elections of 2007 and 2012, for the party’s candidates in the districts of Rae Bareli and Amethi. In the 2012 Assembly polls, despite her labours—she addressed nearly 70 public rallies in Rae Bareli alone—the Congress’ performance was extremely poor. After the polls, therefore, she has been consistently trying to build and strengthen a committed organisational structure in Rae Bareli, though of late she has also been helping Rahul Gandhi in his constituency of Amethi.

It is because of this gradual progression that Priyanka Gandhi’s steps are being closely watched by political observers, though the reaction of Congressmen to these developments has been quiet. The family’s backdoor operative taking such an open interest in the voters of Rae Bareli is bound to lend credence to the speculation around her.