Tagore did not want his Visva Bharati university to become an Oxford or Cambridge. Its administrators today are ensuring that it never will 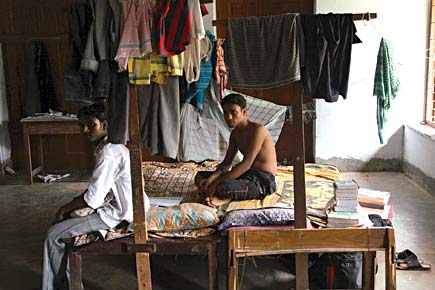 Tagore wished Visva Bharati would not be an Oxford or Cambridge, and university officials are ensuring that


Rabindranath Tagore’s final lecture, read out on his 80th birthday in 1941, was entitled ‘Crisis in Civilisation’. The crisis that he elucidated so vividly in that famous lecture has now come to afflict, and even cripple, Visva Bharati which he had described as a ‘vessel carrying the cargo of my life’s best treasures’ in a letter to Gandhiji in 1940. The crisis in this university is not only deeply existential, but also moral, psychological and attitudinal. A crisis that today has reduced Visva Bharati from its glorious status of world-renowned university to one that can barely even claim to be a regional one of repute.

Demonstrations, unrest among students and staff, murders, molestations, campus violence, thefts (including that of Tagore’s Nobel medallion), drunken revelry and much worse have emerged as sad and shocking features of campus life at Visva Bharati. But these are just outward manifestations of the rot at the university’s core. A rot so deep that many fear is virtually irreversible. And it has all to do with Visva Bharati losing its unique character over the last few decades—a process that perhaps started with a well-intentioned move by Jawaharlal Nehru to make this a central university in 1951. That eventually brought the university under the University Grants Commission (UGC), whose norms and diktats have suffocated and throttled Visva Bharati.

The UGC, however, is just one among the many factors to blame for Visva Bharati’s decline; most of the fault is internal. And central to this is perhaps the change in Visva Bharati’s character as a residential university that fostered a close relationship between its teachers, students and staff, nurtured creativity, inculcated values that Tagore held so dear, and churned out ‘humans’, not mere degree-holders.

“Visva Bharati was never meant to be a university that only awards degrees. Tagore wanted it to be an institution that imparted value-based education, one whose students were creative, sensitive, tolerant, secular, liberal, humane and genteel. Today, there is nothing to distinguish Visva Bharati from other ordinary universities,” laments Dinakar Kowshik, 92, who joined Visva Bharati as a student in 1940 and became the principal of Kala Bhavan, the university’s art college, later.

“Visva Bharati has become an inferior replication of an ordinary, second-rate Indian university,” says a distressed Supriyo Thakur, descendant of Tagore and former principal of Patha Bhavan, the school Tagore set up.

While there are varying interpretations and analyses of the crisis facing Visva Bharati, all agree on this: that the erosion of the residential character of the university, that was so zealously upheld till a few decades ago, has much to do with its decline. “Students, teachers and staff have to stay here throughout the year to really learn, understand, inculcate and promote and disseminate Tagore’s philosophy, ideals and teachings. Unfortunately, most of the teachers are outsiders and return to their families in Kolkata at the slightest opportunity. Students also do the same,” says Gagan Sarkar, president of Visva Bharati’s Karmi Sabha (employees’ union).

Most blame teachers for the malaise that has set in. “Unlike in the past when all teachers were a dedicated lot who used to come here out of their love and respect for Tagore and his philosophy, most teachers come here today for money. They have no commitment, not only towards teaching but also towards the ethos of Visva Bharati,” says Thakur. “Most teachers don’t really know, or even care to learn Tagore, his life, works and teachings. It is thus natural that students also get to learn very little about Tagore. There is thus little to distinguish a Visva Bharati passout from that of any other institution,” admits Kishore Bhattacharjee, president of the varsity’s Adhyapak Sabha (teachers’ council).

“Look at the vice-chancellor. He stays here for only a few days a week. We need a full-time resident vice-chancellor and not a visiting one. The same goes for all the teachers,” says Bhattacharjee of the varsity’s Adhyapak Sabha. But more than the infrequent presence of the VC, it is the lack of knowledge about Tagore and his philosophy among students and many teachers that riles old-timers here. “There is a paper on Tagore Studies in the first year of the undergraduate courses, but it is a farce. No teacher or student takes this seriously,” admits Bhramor Bhandari, former president of Visva Bharati’s Chattra Sammilani (students’ union).

Visva Bharati’s many festivals and functions are an integral part of university life and its ethos. “But most students and teachers use the holidays declared on such days to go to their families in other places. The problem is that there is no sense of belonging,” says Sarkar. “These days, even the vice-chancellor fails to come to many events. This was unthinkable in the past. Tagore used to participate in all events and it used to be considered sacrilegious for anyone on the campus to ignore any function till the other day,” says Bhattacharjee. Old-timers like Supriyo Mukhopadhyay, ex-librarian of the university who has been here since the 1920s, say that the ambience at Santiniketan was like an ashram, exactly as Tagore had wanted it to be. “We all used to know each other and were like one large family. There was no distinction of class, caste, community, race or religion. We were all bound by our love for Tagore and eagerness to imbibe his philosophy. That is no longer the case today,” the nonagenarian, who was close to Tagore, tells Open. “This basic character of Visva Bharati and Santiniketan of an ashram should be restored.”

Others couldn’t agree more, but say that Visva Bharati has travelled too far down the road to becoming an ordinary university, as dictated by the UGC, to return to its ‘ashramik’ roots.

The sharp decline in academic standards has also dealt a body blow to Visva Bharati. “This place used to attract stalwarts in the past. There are barely any renowned teachers today. Naturally, Visva Bharati doesn’t produce talent anymore,” says Thakur. Sadly, few students from even other parts of India are interested in studying at Visva Bharati.

This year, admission tests for the varsity’s undergraduate courses were held in nine major cities across the country; few examinees turned up, with the centre at Hyderabad attracting just one applicant. “During our times, students used to come here from all over the world. I had classmates from Sri Lanka, Indonesia and other countries, besides Gujarat, Chennai, Assam, Manipur and Punjab,” recalls Kowshik, the ex-principal of Kala Bhavan. Foreign students are few and far between, and studying at Visva Bharati isn’t even considered an option by students from other states. “Now, an overwhelming majority of the students are from Bolpur, Birbhum and semi-urban Bengal,” says Thakur. This has, naturally, hastened Visva Bharati’s decline.

“In the past, Visva Bharati used to attract boys and girls from even elite families, including ex-royalty. This was truly a global institution. It has become a regional one now. Visva Bharati hasn’t produced any good painter, sculptor or anyone who has attained fame or excelled in any discipline for many years now. There is hardly any renowned faculty left here. It’s extremely depressing,” says Pulok Chakraborti, president of the alumni association.

A lot of this has to do with the university losing the last vestiges of Tagore’s legacy. “This was never a place to create famous scientists or management experts. Tagore had always said he never wants to replicate an Oxford or Cambridge in Santiniketan. The focus was not degree-oriented education. But Visva Bharati has deviated from this and had started management, mass communication and other courses. It had even planned to offer engineering degrees some time ago. The focus should have been on preserving and promoting the core competency of Visva Bharati—its courses on arts, music and humanities,” says Thakur, former principal of Patha Bhavan.

Visva Bharati, feel many, ought to be unshackled from the UGC. “Its norms may be fine for other universities, but are not conducive to Visva Bharati. The UGC’s focus and priorities clash with those of Visva Bharati’s, but since the university has to follow the UGC’s diktats, it has lost its unique character,” says Kishore Bhattacharjee. The university, for instance, has to hold written admission tests for students and follow the UGC’s norms for appointing teachers.

“But the most qualified candidate may not be the best person to become a teacher here. Visva Bharati would be better off with a teacher who is attracted by Tagore’s philosophy to come and work here rather than an academically well-qualified person whose knowledge of Tagore is just perfunctory and who has no interest in knowing Tagore. This is happening here, and the reason why most teachers know barely anything of Tagore,” sighs Sarkar of the Karmi Sabha.

Thakur feels that Visva Bharati should be immediately taken out of the UGC’s ambit and allowed to function as a totally autonomous institution. But he says it is impossible to restore the lost glory of Visva Bharati. “Visva Bharati has moved too far away from Tagore to return to its founder’s ideals. It will need a Herculean effort, selfless and dedicated people who love Tagore to stem the rot. But there are no such people nowadays,” says Kowshik. Incidentally, a high-power committee headed by Bengal Governor Gopal Krishna Gandhi has recommended a range of measures to arrest the decline. “Some of the recommendations are good, but many are irrelevant,” says Thakur. All others agree, and point out that apart from Amlan Dutta (a former vice-chancellor of Visva Bharati), none of the other members of the six-person committee had any experience in, or understanding of, Visva Bharati or the philosophy of its founder.

One of Tagore’s last wishes, as expressed in his 1940 letter to Gandhiji, was that Visva Bharati ‘may claim special care from my countrymen for its preservation’.

That wish has been destroyed. Tagore gave Visva Bharati its motto: ‘Yatra Visvam Bhavatyekanidam’—where the world makes a home in a single nest. There are many nests in Visva Bharati today, all in very bad shape, and all in imminent danger of falling to the ground.