The VHP’s call to a Hindu ‘awakening’. Mob violence in Uttar Pradesh. Fearful minorities. The Ramjanambhoomi Movement is back. Whether it will work is less certain. 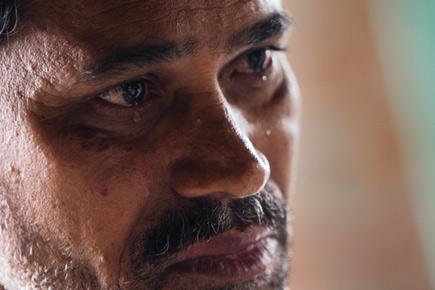 The VHP’s call to a Hindu ‘awakening’. Mob violence in Uttar Pradesh. Fearful minorities. The Ramjanambhoomi Movement is back.


It is difficult to believe in such a coincidence. On 16 August, the day the Vishwa Hindu Parishad (VHP) launched its Hanumat Shakti Jagaran campaign to ‘awaken’ Hindus to its saffron cause ahead of the Babri Masjid title suit judgment, some parts of Bareilly went up in flames. Over 100 shops and several houses were burnt down, scores of people received injuries, and the dargah of Dada Miyan (a Sufi whose real name and period no one is sure of) was desecrated at Faridpur subdivision in Bareilly district of Uttar Pradesh (UP). The VHP’s Ramjanmabhoomi Movement is back, and with a vengeance it seems.

Weeks later, Muslims in Faridpur live in fear that has only heightened since that day. It is the aftermath of the court judgment that scares them. “Ab toh faisle ke baad kaa khauf hai (now we are afraid of what comes after the decision),” says Haji Saiyad Shakeel, whose shop of electrical goods somehow escaped the flare-up that took place on 16 August.

What makes them so apprehensive? “True, the problem started with an altercation between Muslim residents and Kawarias [Hindu pilgrim walkers commonly seen with pails of Ganga water balanced on a rod] passing through a local mosque, and this led to both sides throwing bricks at each other. But all that was over by 5 pm. Shops were set aflame about an hour after this incident while there was an undeclared curfew in town and we were too scared to come out,” says Sajid Hussain, a victim who lost his cycle spare parts shop in the riot. “How could Kawarias, who were only passersby, know which shops belong to Muslims and which to Hindus—and that too, on a day when markets were closed?”

Indeed, 16 August was Monday—a day that bazaars in Faridpur stay shut. Of the 113 odd shops that were set afire on that fateful day, 110 belonged to Muslims. Most of these were in markets of mixed ownership shops. Consider the 22-shop bazaar opposite CS Inter College. Only two shops were burnt here, the only two owned by Muslims—one belongs to Sajid Hussain and the other to Nadeem. The violence in other bazaars also saw a similar selective targeting of shops. The three Hindu shops which were gutted that day just happened to be a little too close to Muslim shops.

So, who directed the flames of Faridpur? The administration refuses to see any design, but locals are not so blind. “A day before the riot, a minor dispute had taken place between a group of Kawarias and Muslims in the same locality, but it passed off peacefully. Afterwards, that very day, a meeting of VHP leaders was held at Dharmashala, an old guest house-turned-primary school still known by its old name. Later that night, there was a hectic campaign by VHP men in nearby villages like Osad, Rajau, Pachauni, Sisaiya and Mamadpur. The man who was seen most active on these two days was Jitendra Chauhan, Bajrang Dal’s city president. The next evening, hours after the brickbatting between Kawarias and Muslims, shops were first looted and then burnt down. The looted items have now started surfacing in villages where VHP activists campaigned the night of 15 August. Jitendra Chauhan, of course, has not been seen in Faridpur since 16 August.” So goes the testimony of a Hindu whose shop stands opposite Dharmashala, where VHP leaders met on 15 August.

The subsequent launch of the Hanumat Shakti Jagaran by the VHP, which coincided with Faridpur’s communal flare-up, has been greeted with deep anxiety by Muslims across the state. The stated objective of the VHP campaign is no more threatening than a mass recital of the Hanuman Chalisa—narrative tale of this deity’s life—at temples in the country’s towns and around a third of its villages (that’s 200,000 of them) ‘for the awakening the Hindus’, as they keep saying.

The decision to launch this campaign was taken by the VHP’s central executive—called Sant High Power Committee—in early July this year. Following this, the VHP dispatched 1,008 boxes of Mahaveeri (vermilion-smeared idols of Hanuman) to locations across the country as a precursor to its campaign and reminder of its Ram temple cause.

Whether the VHP succeeds in retrieving Hindus from their slumber (as they see it) may be unclear at this juncture, but it is certain that this saffron formation cannot afford to lose this chance at relevance. It may well be the entire Sangh Parivar’s last chance. No wonder leaders of the Rashtriya Swayamsevak Sangh (RSS), VHP and other outfits of the extended ‘saffron family’ have begun making public assertions that they would honour the judgment if and only if it supports the case for a Ram Mandir where the Babri Masjid stood in Ayodhya before it was torn down on 6 December 1992 by a mob of so-called kar sevaks (holy workers).

The old rhetoric has returned. During the Jagaran’s inauguration ceremony, RSS Chief Mohan Bhagwat said that the proposed “Ram Mandir is a matter of faith for crores of Hindus and cannot be built simply by a court judgment. We will ensure that it is either built by consensus or through struggle”. At a press conference in Delhi on 27 August, VHP President Ashok Singhal demanded that the disputed site be made available for a Ram temple through an Act of Parliament, regardless of the Judiciary’s ruling. “The Sant Samaj has made it absolutely clear that to Hindus, the birthplace of Ram is not a ‘property’ but as much a ‘deity’ as Sri Ram Lalla [himself], and, therefore, worthy of worship in this capacity,” he announced, “Millions of devotees have sacrificed their lives for the sake of this site.”

As if their rejection of the court judgment even before its delivery were not enough, Singhal went on to make even more provocative remarks: “No mosque would be allowed to be built within the cultural range of Ayodhya [which houses well over 50 mosques and dargahs… see accompanying story], and no mosque glorifying Babur would be allowed to be built anywhere in the whole country.”

To be sure, the Sangh Parivar’s efforts to saffronise society at large have been taken note of by the Uttar Pradesh government, which has identified 19 of the 72 districts in the state as ‘hyper-sensitive’, besides 25 others as ‘sensitive’.

Such officialese masks the particularly vicious shape that the latest Hindutva campaign has taken at the local level. Several devious means have been deployed by saffron activists to stoke ill-will among Hindus towards Muslims, projected as occupiers and defilers of a holy spot in Ayodhya. The force of innuendo, that old ploy to arouse communal sentiments, now has a new medium at its disposal, courtesy the SMS.

Charged with keeping the peace, local authorities claim to have wisened up to such efforts. At Atrauli subdivision in Aligarh district, the police arrested a Bajrang Dal activist, Saurabh Jain, for sending emotive SMSes on 29 August. Within hours, hundreds of Bajrang Dal activists gathered at the city’s Kotwali police station. Fearing a mob backlash, the local administration let Saurabh off. Emboldened by this, Bajrang Dal and VHP activists then led a procession throughout the city, shouting provocative slogans as the police watched in silence. Meanwhile, similar SMSes have been cropping up in several other parts of UP.

TO FLOG A PET CAUSE

In the unlikely event of the VHP actually gaining some success through its latest effort to set the country astir, it won’t be the end of it. It has another set of symbolic battles in the works that invoke Hindu pride—or its own estimation of it—laced with angst against alleged Muslim slights from the past. Sangh Parivar outfits, for example, rarely call Aligarh by its name. In all their publications, the city is referred to as Harigarh. “Originally, the city was called Harigarh,” explains Siddharth Mohan, Aligarh VHP president, “As Muslim invaders erected a mosque after destroying the Ramjanambhoomi temple at Ayodhya, this city was also forcibly renamed Aligarh by the same people. Very soon, we will start a movement to restore the city’s old name.”

How much traction will such agitations get? Increasingly, to many, they sound like acts of desperation of an outfit on the wrong side of history. “In urban areas, the enthusiasm level of Hindus is not as high as it used to be in the early 1990s,” admits Tej Pratap Sharma, Aligarh district coordinator of the latest Jagaran.

But there’s a new target group now. “In villages,” he beams, “Hindus participate more enthusiastically in our campaign.”

Muslim organisations, meanwhile, have opted for discretion—it’s a matter of the rule of law, they say. “The VHP is looking for ways to strengthen itself, though its agenda does not strengthen the nation,” says Dr Mufti Zahid A Khan, chief Mufti at Aligarh Muslim University. “The Constitution is supreme,” he adds, “A rejection of the final verdict by either party would be unconstitutional. If a party feels aggrieved, it can certainly go for a Supreme Court appeal. But when the Supreme Court gives its verdict, everyone must accept it.”

Maulana Tauqeer Raza Khan, the political representative of the Ala Hazrat family of the Barelvi sect, is worried too. “Although it is not possible,” he says, “it would have been better if the judgment could have been deferred until the next Assembly election in Uttar Pradesh (due in 2012).”

As it happens, the judgment is due, and its elongated shadow is likely to fall on UP and national politics for some time to come. But whether this will be enough to revive the fading fortunes of the Sangh Parivar would be a brave guess to make.