Not Just a Cock-and-Bull Story

The world’s most virile bull, still a virgin at six, is more expensive than a Ferrari. In a remote village in Haryana, we find the loneliness of Yuvraj more expressive than the reproductive business he runs 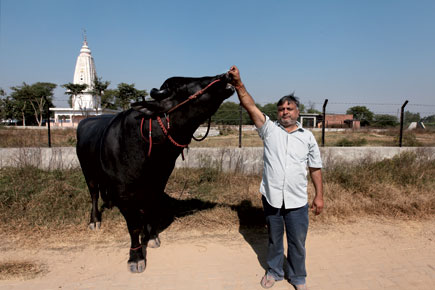 The world’s most virile bull, still a virgin at six, is more expensive than a Ferrari. In a remote village in Haryana, we find the loneliness of Yuvraj more expressive than the reproductive business he runs

In Sunarion village, tucked deep inside an agricultural belt somewhere in Babain tehsil of Haryana’s Kurukshetra district, if you ask for directions to Karamveer Dairy Farm, you are likely to get bemused looks. The villagers here are still not used to visitors from all over the country and beyond —from Punjab, Uttar Pradesh and Andhra Pradesh, from Canada, Australia and Venezuela—who flock to this sleepy little settlement with nothing out of the ordinary to recommend it, save for one famous denizen.

But first, a short history of how it all began. In the second week of October, the All India Cattle Show was held in the city of Meerut, Uttar Pradesh. As events go, this is not one that the media would take notice of, let alone go to any extremes to cover. The Show had cattle from all over the country, but its panel of ten judges was impressed most by Yuvraj, a big black bull of the Murrah breed (native to Haryana), 1,400 kg by weight and nearly 5 foot 8 inches in height. The bull was adjudged the Best Animal of 2014, and that would have been that.

What followed, however, was incredible. Karamveer Singh, the farmer who owns Yuvraj, was made an offer of Rs 7 crore by a farmer from Andhra Pradesh for his bull. Even more astounding was the fact that it was an offer Singh could afford to refuse. It made Yuvraj, whose trophies outnumber his years (the six- year-old has won eight championships thus far) among the world’s biggest bovine stars, his closest competitor being Miss Missy, a Holstein cow from Canada with a Wikipedia page of her own.

As a bull more expensive than a Ferrari, Yuvraj made international headlines. What evoked curiosity was why the dairy farmer from Haryana was not impressed by the offer. He knows better, you see. He knows that this bull will make him as wealthy as a sultan, bring him untold riches and unbounded fame. One day the illustrious animal may even lead him to his treasured dream: to buy a helicopter. The explanation lies not just in Yuvraj’s peerless pedigree (as the finest specimen of the Murrah breed, which has the highest yield of milk among buffaloes), but also his extraordinary virility (he has been called the ‘Vicky Donor’ of the buffalo world), which earned Singh more than Rs 60 lakh last year by way of semen sales to farmers all over.

As the story goes, the legend of Yuvraj has been growing since early this year, when he was noticed at another miss- able event (at least for non-farmers), the Progressive Punjab Agriculture Summit in Mohali. Between these two outings, however, a star was born. If you google him and refine your search by adding ‘bull’ (to distinguish him from the cricketer), more than 300,000 results show up instantly. Yuvraj is now almost as famous as his namesake, the cricketer, after whom he is named; and just like him, the bull’s father too is called Yograj, as I am told by his doting owner. “He is Yuvraj because he lives like a prince.”

Along a narrow road on the outskirts of Sunarion with fields of sugarcane on either side, a young man, holding a lathi in one hand while riding a bike, his face covered with a proud moustache and sleek aviators, looking every bit the stereotype of a Haryanvi Jat, directs us to a sprawling mud-coloured two-storey building that towers over the village.

Karamveer Singh’s precious cattle herd is kept in an open shed next to the house where he lives with his wife. Yuvraj, the pride of Sunarion, ‘Shaan-e-Haryana’ as some of his gushing online fans call him, is tied to a gatepost at the shed’s entrance. He stands right in front, apart from all the others bulls and buffaloes, framed like a movie hero, and from a distance he looks like a great black truck.

A closer inspection reveals some of his finer features: the tightly curled horns, the coal black body glistening with oil that catches the afternoon sun, the tuft of hair on his forehead, his big mournful eyes and long eyelashes. On his right foreleg, a thick red thread has been tied to ward off the evil eye.

Singh, a squat man with a whimsical face, is giving instructions to his farmhands. A musky odour mixed with the smell of freshly cut grass and mustard oil, which is not unpleasant, clings to the place. Morning hours are the busiest of all at the farm. The animals are first fed, then given their daily bath with fresh tap water—never in the village pond, which is for ordinary cattle and not clean enough for Singh’s special bovines—and are then rubbed down with mustard oil for 20 minutes each, which gives them a shiny black sheen.

We sit down amid the brisk activity. “Yeh meri dairy hai, par lagta circus hai (This is my dairy, but it looks like a circus),” he begins, referring to how people come from far and wide to look at his collection of cattle. Singh has many other business interests and acres of land, but spends most of his time in the shed tending to his herd. “Yeh mera shauk hai, kaam nahin (It’s my hobby, not work).” At one point in the conversation, he professes to love Yuvraj more than he loves his own sons, who are studying abroad, pursuing professional degrees. His affection reminds me of Lord Emsworth with his passion for his prize-winning sow, the Empress, inasmuch as an earthy Jat farmer from Haryana can bear a resemblance to an upper-crust British peer.

The bulls and buffaloes at the farm, nearly 25, are all from the same gene pool as Yuvraj; they are the offspring of Yograj and Ganga. Singh tells me the story of how he discovered his passion and talent for breeding top-quality cattle. It started 14 years ago, when he happened to acquire Yograj as a seven-month-old calf from a distressed farmer in Rohtak. A combination of acuity and some luck led him to mate Yograj, an exceptional bull, with Ganga, an elite buffalo, who in her prime yielded 26 litres of milk a day, which resulted in what is now the first family of the buffalo world. An entire room in his house, which resembles a 1970s film set with its winding marble staircase, is taken up by trophies and shields that have been won by his herd at various shows, the most by Yuvraj, even though the younger ones are beginning to catch up.

Singh brings out his brood. There is Bhim, Yuvraj’s younger brother, an energetic young bull, a prodigy who is only two years old and is expected to surpass his brother’s fame. And there is Saraswati, the one-year-old sister, substantial in size, who is vigorously chewing cud. Ganga, the mother, slowly ambles forward. She is pregnant for the sixteenth time, the gift that keeps on giving. Like a proud collector of rare jewels, Singh takes me around to meet each and every one of them, though, apart from Yuvraj who stands the tallest, it is impossible for me to tell the difference between the big black blurs.

Like many high achievers, Yuvraj leads a regimented life. He begins his day with 10 litres of milk at 6 in the morning, which is laced with various proteins and tonics to protect his liver. After a few hours, he is given 5 kg of apples, and after his bath and massage, he’s left to sun himself in the dirt corral in the middle of the shed. In the evening, he goes for a brisk walk of 4 km around the village escorted by two minders, as he cannot be allowed to become overweight.

At 1,400 kg, is it not a little late to worry about his weight? While he seems a big boy, it turns out he is actually quite fit. After his walk, he consumes another 10 litres of milk and about 15 kg of cattle feed. His daily upkeep costs Rs 2,000. “He must have been a raja maharaja in his past life, look how pampered he is,” says Singh with a smirk.

When it is time for the photo shoot, an outdoor setting is sought that matches the glory of Yuvraj, and so we set off for a walk in the village. Four of his minders appear, two at the front to pull him by thick ropes and two at the back. Passersby crane their necks when they spot him, a group of school children stop in their tracks to stare at him. Our pace is languorous and we stop at least three times as Yuvraj decides to alternately take a dump and then a leak. This is where the two minders at the back efficiently step in. They walk with buckets of water and cloth rags to clean him.

Singh’s young nephew Vikrant, who breeds dogs, has joined us for the walk and he is full of useful information. “He is very clever, he likes to go outside and never in his own shed, which he keeps very clean.” “Look how he poses for the camera. Iska apna style hai (it’s his own style), he becomes smarter, like a showman.”

Now all this fuss may seem absurd, but it is serious business. Murrah is considered one of the world’s finest breeds of buffaloes, and there is a growing demand for the kind from across the world. Such buffaloes account for more than 56 per cent of India’s total milk production. Poonam Sikka, principal scientist at the Central Institute for Research on Buffaloes (CIRB) in Hisar, has spent 30 years researching the animals and is extremely passionate about her subject. She says, “It is a species which is famous all over the globe. Through artificial insemination, Murrah has been exported to China, Brazil and Western countries, where they are raising herds. It gives the highest milk production, which is also of the best quality, very high in nutrients and vitamins. It is also famous for its quality of meat.” On the website of CIRB, which also sells frozen semen to farmers, the rates start at Rs 15 per dose and go up to Rs 100 for all bulls, except Yograj and Yuvraj, whose semen is sold at Rs 500 a dose.

Later, when I sit with Singh in his trophy room where the light bounces off the gold of the trophies, he tells me the details of how he is making his fortune. Yuvraj’s semen is collected through a scientific method that uses an AV (‘artificial vagina’), then frozen and sold. The potential risk of disease is too high to allow the purebred to mate naturally with a female. It’s time for the big reveal: Yuvraj is a virgin. This then is the ultimate irony. The most procreative bull in the world must remain a prisoner to his own virility.