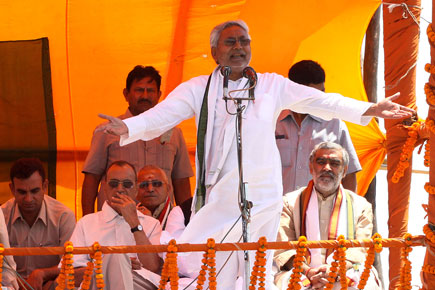 
As the possibility of Narendra Modi being projected as the BJP’s face for 2014 strengthens, even if only informally, the BJP-led National Democratic Alliance (NDA) is nearing a crisis in Bihar. The JD-U’s Nitish Kumar, who has never hidden his dislike of Narendra Modi, is seriously thinking of going it alone in the next parliamentary election. According to a senior JD-U leader, considered very close to Nitish Kumar, “The move to part ways with the BJP is now irreversible and would be announced at an opportune moment.”

While talking to Open on condition of anonymity, Nitish’s aide claims that party leaders have already weighed the consequences of leaving the NDA and have arrived at the conclusion that this is the only way they can stave off the threat they face from a probable secular alliance between Lalu Yadav’s Rashtriya Janata Dal (RJD), the Congress, and Ram Vilas Paswan’s Lok Janshakti Party (LJP).

According to sources in the JD-U, Modi’s projection as a possible prime ministerial candidate of the BJP is increasing the probability of such a secular combination doing well in Bihar in the next Lok Sabha polls. The threat of the Muslim vote drifting back to the secular combination in case Modi or even Advani is perceived as the prime ministerial candidate of the BJP is already palpable in the state. Nitish’s fate, sources in the JD-U acknowledge, would be sealed the moment that happens.

Such apprehensions are not unfounded. RJD leader Lalu Prasad is already on the job. Talking to reporters in Patna last week, the RJD chief claimed, “The next general election will be fought between secular forces headed by the UPA and BJP-led communal forces.” Though opting to remain ambiguous on whether there will be a pre-poll alliance among UPA allies, Lalu Prasad asserted, “Whatever be the options before the UPA constituents, one thing is clear—that the Congress-led secular front will come back to power in the next general election and keep communal and fascist forces at bay.”

Political observers feel that Nitish Kumar’s position in the NDA would become even more untenable in case Modi achieves what seems likely at the moment, another landslide victory in the Gujarat Assembly polls. This is what has forced Nitish Kumar to follow the BJP’s campaign in Gujarat with some anxiety, while keeping an eye at the same time on the RJD’s all-out bid to turn the next general election in Bihar into a direct fight between secular and communal forces.

According to sources, the JD-U, despite all its efforts to win over Pasmanda Muslims over the last few years, has remained precariously placed vis-à-vis the minority community—a solid vote bank—whose move towards Nitish is largely held responsible for Lalu’s washout in Bihar.

An operation akin to the one carried out in Odisha by Naveen Patnaik in 2009 who fought the election independently of the BJP is, therefore, seen as the only way Nitish can escape disaster. Such a move would also help him chart a possible route to New Delhi—his ultimate ambition, which is no longer a secret in Bihar or outside the state. Even the close aide of Bihar’s Chief Minister acknowledges his leader’s ambition: “Nitish Kumar would not like to remain Chief Minister of Bihar all his life, and he knows that there cannot be a better opportunity for him.”

The JD-U, earlier called Samata Party, entered an electoral alliance with the BJP in 1996, months after the party’s pathetic performance in the 1995 Assembly polls when it got only seven of the Assembly’s 324 seats in the undivided Bihar. Despite minor skirmishes, the alliance has continued ever since, dislodging successfully the government of the RJD in 2005 and then sweeping the state in the Lok Sabha election of 2009 and Assembly polls of 2010.

That phase, however, has started changing. Bihar is no longer the same, and Nitish has encountered several roadblocks in the last couple of months. Simultaneously, the crowd at public rallies of Lalu Prasad has begun to swell, although the numbers are still not large enough to pose a serious threat to the incumbent government in the state.

JD-U sources say that Nitish Kumar, the face of the party, does not belong to a caste with a substantial numerical presence in the state. The Chief Minister, therefore, has been cultivating a support base among Mahadalits and Extremely Backward Castes. While Muslims together with Bihar’s Yadavs had been the backbone of the RJD in its heyday, Nitish Kumar has tried—and succeeded to a great extent in—winning over backward sections of the minority community, called Pasmanda. Sources point out that it was primarily because of the Chief Minister’s plans to further expand the party’s base among voters of the community that the JD-U in its alliance with the BJP traded off some of its secure seats for those in the Muslim dominated districts of Kishanganj, Araria, Purnia and Katihar in the last Assembly polls. Earlier, these seats were contested by the BJP.

Sources say that in case the JD-U goes into the next general election as part of the NDA with either Modi or Advani as a prime ministerial candidate, all the efforts by the Chief Minister to lure Muslims away from the RJD would be rendered futile. If, on the other hand, Nitish Kumar parts ways with the BJP, he would not only be able to consolidate a formidable vote base in the state but would also neutralise the secular threat spearheaded by Lalu Prasad.

Also, as Naveen Patnaik’s example in Odisha shows, going it alone could help increase the JD-U’s clout in the post-election scenario. As part of the NDA, the JD-U can contest only 25 Lok Sabha seats while the remaining 15 seats in the state are contested by the BJP. In the last general election of 2009, the JD-U won 20 out of 25 seats it contested. But this would not be enough to propel Nitish Kumar to Delhi, in case such a possibility opens up after the next general election. Freed of the BJP, the JD-U would be in a position to put up candidates in all 40 seats in the state and could think of a larger say in any government formed at the Centre.

Sources in the JD-U assert that such a move would not destabilise its government in the state. The party has a total of 118 MLAs—only four less than the halfway mark in the Assembly—and the shortfall could be managed easily with small parties in the House and independents.

Sources point out that it is because of these considerations that party spokesman Shivanand Tiwari lost no time in supporting Prime Minister Manmohan Singh’s remarks in Gujarat that there were serious reservations in the minds of minorities over Narendra Modi. “It is true that there are serious reservations in the minds of minorities concerning Narendra Modi. There is no doubt about it, and [the PM] has utilised it as a Congress leader during the election campaign,” Tiwari remarked in Delhi on 10 December—a remark that appeared non-palatable even to the leader who has been dubbed for long as Nitish Kumar’s man in the BJP, Bihar Deputy Chief Minister Sushil Kumar Modi.

Indeed, the die has been cast.