With expectations of the NITI Aayog so high, it was never an easy task delivering on its promise of a new approach to development. Time is running out 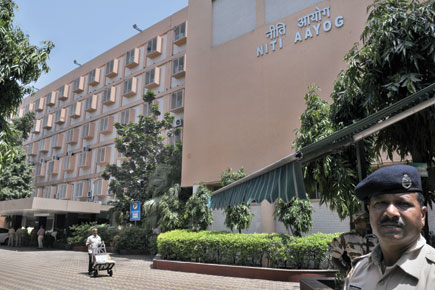 When he took over as vice-chairman of the National Institution for Transforming India (NITI) Aayog a year ago, Arvind Panagariya had been abroad for nearly four decades, writing academic papers and teaching Economics. The Columbia University professor had earned himself a name at home as a columnist much earlier, and in the run-up to the 2014 General Election, the 63-year-old had emerged as a champion of the ‘Gujarat Model’, shorthand for what he and his mentor Jagdish Bhagwati called ‘growth and entrepreneurship driven development’. In a book the duo authored a year earlier, they pitched the ‘Gujarat Model’ against the ‘Kerala Experience’, which had been hailed by Professor Amartya Sen as a successful experiment of a policy framework based primarily on redistribution and state-driven development. Academic rivalry spilled over into politics after Bhagwati and Panagariya argued that Sen was wrong—and that it was the ‘Gujarat Model’ that has delivered benefits even in Kerala, a state known for high social indicators. Panagariya played a pivotal role in the debate that was revived ahead of Narendra Modi’s triumph in a general election in which the BJP prime ministerial candidate was pitched as a moderniser, doer and reformist. In an interview in early 2013, Panagariya and Bhagwati had said they favoured Modi’s economic policies. Months later, Panagariya maintained that he trusted the leader’s political instincts as well, arguing that the ‘Gujarat Model’ was worthy of being replicated at the national level.

Which was why when Prime Minister Modi handpicked the Economics professor last January as vice-chairman of the new entity that replaced the 64-year-old Planning Commission, it surprised none. Panagariya’s name had come up as a probable even earlier when the new BJP-led Government was scouting for a chief economic advisor.

The new institution required a combination of vision and leadership. Panagariya, an unassuming man from academia, was expected to lead the NITI Aayog to fill a gap that the Planning Commission could not. However, disappointment has begun to surface in some quarters. “It may be too early to judge a new organisation, but it seems to me that it is not in good order. The leadership needs to offer much more than it is doing now,” says a senior official close to the matter who doesn’t wish to be identified because he is not authorised to speak to the media.

Panagariya seems to be aware of sporadic criticism of his leadership, especially over cohesion and interaction within the organisation, but he notes in an interview with Open that things are set to improve with him looking at “creative” ways to improve communication between verticals (see ‘We want greater cohesion’).

Says a senior railways official who interacts closely with the NITI Aayog: “Panagariya’s job at hand is nothing short of Herculean and therefore it is natural that he attracts a lot of criticism. There won’t be much mercy and I am sure Panagariya was aware of the challenges when he took over as vice-chairman last year. After all, though it is a new body, it is one of the most ambitious projects of Prime Minister Modi.” A senior BJP leader notes that Modi is unlikely to treat any delay in putting the Aayog on the fast track. He emphasises, “That the Prime Minister named a high-profile bureaucrat as chief executive officer at this organisation may be an effort to speed up things at NITI Aayog. [Amitabh Kant] has great experience in accomplishing new assignments.” A senior government official, who also asks not to be named, says, “The Prime Minister may be trying to see if he can liven things up, perhaps.”

It was in August 2014, in his first Independence Day speech, that Modi asserted that the Planning Commission had outlived its utility. It was then that he promised a new institution to replace the Commission “shortly”. He delivered on his promise in less than five months—on 7 January 2015 to be precise. On that day ended an era, and a whole way of achieving ‘development’ that had been in vogue since 1950.

At one level, the Commission had ceased to serve a useful purpose. When it was launched on 15 March 1950, India was one of the poorest countries in the world. Just three years earlier, the country had seen a bitter partition. States with rather different administrative capabilities coexisted with each other. The natural wealth of India—minerals, hydrocarbons, hydroelectric potential and a host of other resources— was not only underexploited, much of it was unknown. At that early stage of its existence, Independent India’s concerns were very different. Coordination between the Union Government and the states was essential if India was to develop economically. A Cabinet resolution of the time took note of this problem.

However, it was never able to overcome it fully. For, tucked away in the resolution was another element of the Commission’s mandate—‘formulate a plan for the most effective and balanced utilisation of the country’s resources’— that was to ensure sustained friction between the Centre and the states all through the institution’s existence. Even as late as the second term of the erstwhile UPA Government, elected chief ministers trooping to Yojana Bhawan seeking approvals for state plans from a non- elected body made for an unseemly sight. So when Modi displayed his irritation with, and resolve to get rid of, the Planning Commission on 15 August 2014, he was responding to a history of 64 years of ‘dictation’.

Yet, it must be admitted that in spite of many setbacks to the planning process— notably, the inability to meet targets of various kind—India did make progress over time. The process of formulating annual plans for states and the Union’s famous Five-Year Plans did provide the country with an idea of what was needed. The reason these did not work had much to do with the limitations of what plans can do in a democracy. Economists like Friedrich Hayek showed that for a plan to succeed, even in theory, either democracy would have to be given up or the nature of planning would have to be changed. Both could not go hand in hand.

Now, does that obviate the need for long-run planning? A government that continues its business on a day-to-day manner without making a long-term assessment of what is needed is bound to be ineffective. A country like India— unique among nations of its size for its diversity—needs careful future planning of the resources it requires. It also needs a great degree of strategic thinking to meet its goals—such as fast economic growth and a higher standard of living for its citizens. Target-based planning may be defunct, but planning in itself is not.

It was the NITI Aayog that was expected to step in and take charge of that. Instead of this objective being framed properly, however, the new institution’s purpose was couched in generic terms: ‘Through its commitment to a cooperative federalism, promotion of citizen engagement, egalitarian access to opportunity, participative and adaptive governance and increasing use of technology, the NITI Aayog will seek to provide a critical directional and strategic input into the development process. This, along with being the incubator of ideas for development, will be the core mission of NITI Aayog.’ Faced with such an ambitious—or poorly defined— goal, the new institution required a strong leader. After all, the problems it’s expected to address are so many. Consider the questions that suggest themselves. What will happen to state plans now, especially where such measures are chaotic? As long as the Planning Commission managed states, there used to be a degree of coherence. Also, can India survive without long-term perspective planning? Who will ensure coordination of these plans over long periods of time? Has the NITI Aayog made any changes in terms of attracting the right kind of experts (instead of the usual bunch of secretaries)? Has re- training and re-skilling been planned?

Several officials that Open spoke to say that a cursory look at the Aayog’s functions on its website reveals that they are extremely general in description.

Bibek Debroy, a member of NITI Aayog, admits that “NITI Aayog’s credibility is important because it is the Prime Minister’s idea”. Debroy, a renowned economist and writer, concedes that the organisation needs to hire fresh talent to meet high expectations. He is also worried about the impact of “the uncertainty” created by the 14th Finance Commission, which had recommended that tax devolution form a larger part of the transfers to states from the Union Government than earlier.

Another Delhi-based official is of the view that Panagariya’s lack of experience at government-run organisations may be to blame for “poor interaction” within the Aayog, even among its members and other officials. “He has been away from India for long. And maybe he doesn’t know how things work in India. He should develop more confidence and interact more freely with the media to highlight [the Aayog’s] achievements so far,” he says. Another person in the know says that the vice- chairman should also spend more time building relationships with officials and senior ministers who have to work closely with him—especially with ministries such as health, education, roads and railways. Agrees a Commerce Ministry official, “Collective responsibility seems to be relatively absent… Within NITI Aayog, there is a lack of coordination. Officials and some of the members are upset that there aren’t regular meetings to take stock of the functioning of the [new] entity.”

Panagariya often forecasts growth figures for the economy. There may be higher returns in paying due attention to interpersonal skills as well.