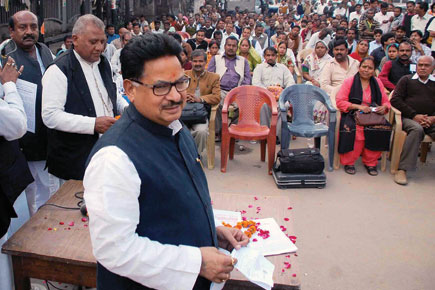 
The upcoming Assembly polls seem to have opened up a new avenue of power for civil servants. In a good number of constituencies in Uttar Pradesh and Punjab, senior bureaucrats—most have retired though some are still serving—are getting ready to enter the electoral fray. While Assembly elections in Uttar Pradesh are due in May next year, in Punjab they are scheduled for February 2012.

In Uttar Pradesh, over a dozen retired civil servants have already taken the political plunge ahead of the Assembly polls next year. A good example being PL Punia of the Congress, who successfully graduated from bureaucracy to politics after winning a Lok Sabha seat from Barabanki in the 2009 general election. He now heads the National Commission for Scheduled Castes (NCSC). Punia had served as principal secretary to UP Chief Minister Mayawati till the two fell out over the Taj Heritage corridor case. Although he had lost his first bid, getting defeated in the 2002 Assembly polls, he bounced back in 2009, setting a trend for other retired bureaucrats in the state.

For the latest crop of bureaucrats trying to carve out a political space, the Bahujan Samaj Party (BSP) and Rashtriya Lok Dal (RLD) have proved to be the most sought after parties, though the Congress and Peace Party have also gained a few of them.

Hiralal Pasi, a senior IPS officer who quit his job six years before his retirement and joined the BSP, will contest from the Ambedkar Nagar constituency. Tribhuvan Ram, a technocrat who retired after serving as chief engineer in the Public Works Department, has won the BSP’s ticket to contest from a reserved constituency in Varanasi.

Mayawati is also planning to field two other retired IAS officers—Shrawan Kumar Sharma and CN Dubey—in the upcoming polls. While Sharma is likely to contest from a constituency in Noida, Dubey is slated to fight from Sultanpur.

The report card of Ajit Singh’s RLD is no less impressive. Besides Baba Hardev Singh, who now acts as Ajit Singh’s advisor after his stint as president of the state’s PCS association, the RLD has attracted at least three retired IAS officers in the past one year or so. These include RP Shukla, Markanday Singh and SN Dubey. Though the party is yet to announce their candidacy, it is believed that most bureaucrats joining the RLD will get tickets to contest the Assembly elections.

Though in lower numbers, a few former bureaucrats are also looking towards the Congress and Peace Party. Rai Singh, a former district magistrate of Pilibhit who was once known for his proximity to BSP founder Kanshi Ram, has joined the Congress and is likely to contest from Pilibhit. Another former civil servant—ex-DGP Yashpal Singh—has joined the Peace Party and has already started his campaign in the Thakur-Muslim dominated Balrampur Assembly constituency. Singh, whose wife Geeta Singh was once a Samajwadi Party MLA from this constituency, hopes to cash in on his Thakur identity and the party’s Muslim support base, which has been in evidence lately.

Though Uttar Pradesh has emerged as the nerve centre of former bureaucrats planning a career in politics inspired by their erstwhile colleague Punia, the phenomenon is even more glaring in Punjab. Two senior bureaucrats, though still in service, are said to have started campaigning for the Assembly elections. The duo—Punjab Director General of Police PS Gill and Chief Minister Prakash Singh Badal’s Principal Secretary Darbara Singh Guru—are scheduled to retire later this year. The two are likely to contest on Shiromani Akali Dal tickets.

Gill, in fact, is reported to be actively campaigning in his hometown Moga.

Bureaucrats are within their rights to contest elections. What is appalling is that Gill and Guru seem to be at it while still in service. And in service, bureaucrats are supposed to be politically neutral, or else their objectivity and political impartiality can become suspect. Yet, no action can really be taken against the duo simply because neither could be asked to explain what is on their mind. Nor is it illegal, in the sense that there is no bar on anyone contesting elections. Nevertheless, the development has been creating political ripples in the state.