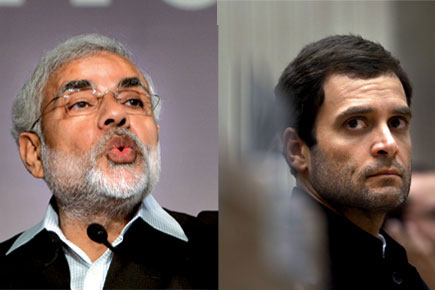 When we analyse the numbers by category, significant observations follow. Modi pulls ahead of Rahul most significantly among urban, male, high-income and upper-caste respondents. This trend holds to a less but still significant extent even among semi-urban, middle-income and OBC respondents. The only categories where Rahul has been able to retain some of the traditional support base of the Congress is among Muslims, who overwhelmingly oppose Modi, as well as Dalits and Tribals. This is also reflected in the narrower gap between the two in rural areas.

Gender differences show up in a major way, with female respondents not quite displaying the overwhelming support for Modi that is evident among male respondents. The breakup according to geography is another surprise, with Modi trailing Rahul by a percentage point in his own West Zone, while the most significant gap in his favour, of 29 percentage points, emerges surprisingly in the South.

Respondents were also asked to consider their impressions of the two leaders on a number of important issues. When issues related to governance, such as economic growth and curbing corruption, were considered, Modi outscored Rahul, though the gap was much smaller among female respondents. When respondents were asked to consider issues that we loosely label ‘emotive’, such as the well-being of minorities or managing a coalition, the gap shrinks significantly, with Rahul actually outscoring Modi among women.

While the survey does not reflect electoral reality—for instance, the South is unlikely to support the BJP in such numbers—it does seem to indicate that the shifting demographics of a country that is urbanising and where incomes are growing strongly favour Modi, who can only expect to see his support base grow. It also gives the respective electoral teams something to chew on.

In the short term, Rahul clearly needs to focus on categories and issues where the gap is small or in his favour. Holding on to Muslims and Dalits, he needs to directly address rural voters, which is perhaps what the cash transfer scheme and land acquisition bill are aimed at, as well as take advantage of his somewhat better image with female voters, perhaps even consider passing the women’s reservation bill. In the longer term, his party has no choice but to reinvent itself.

How the Survey Was Done

The basis for this ‘leadership’ research (along with the Issues and political support parameters) is the weekly CTS (C-Voter Tracking Survey), which has now been running for the fifth consecutive year, starting immediately after the 2009 Lok Sabha elections. CTS has conducted and analysed close to half a million interviews at the state and national levels, which makes it the largest in any tracking survey of its kind.

Samples collected during this survey are nationally representative, selected randomly by CATI (computer-aided telephonic interview) across 28 states in India. Once the respondents are randomly selected across the country, their demographic profile is obtained directly from them, and the responses are weighted to take care of any imbalances in the sample. The data is weighted to the known demographic profile of the state as per the 2001 census. Thus, the calling data fully covers India, both geographically and demographically. The margin of error is +/- 3% at the national level and +/- 5% at the regional level.