Despite similar insistence by the PM, the FDI issue failed to see the Congress orchestrate a repeat of the Nuclear Deal triumph 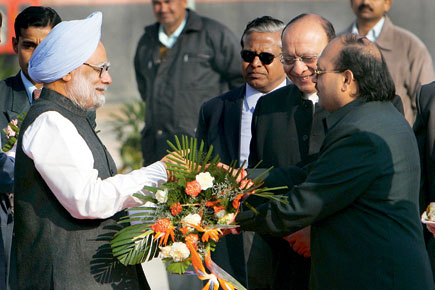 Despite similar insistence by the PM, the FDI issue failed to see the Congress orchestrate a repeat of the Nuclear Deal triumph


NEW DELHI  ~ Over three years ago when the Manmohan Singh Government was in a crisis because of the Indo-US Nuclear Deal (as it found itself on the issue of FDI in the retail sector), no one had expected the UPA to pull through. But it did, and survived the trust vote on 22 July 2008 by a 275-256 Lok Sabha split. The miraculous change of heart experienced first by Amar Singh, who was then the powerful general secretary of the Samajwadi Party (SP), and then by SP chief Mulayam Singh Yadav—who had been with the Left on this issue all through—ultimately won the day for Manmohan Singh. In 2008, the SP’s 39 members in the Lok Sabha proved to be the critical crutch that held UPA I erect even after the Left parties withdrew their support.

A repeat of July 2008, however, could not become possible this time even as Manmohan Singh sought to make the issue of FDI in multi-brand retail a matter of prestige in the same manner as the Indo-US Nuclear Deal had been turned into an instance of the Prime Minister’s authority three years ago. This was evident in the strident position that the Government took on the FDI issue till the last minute before giving in to opposition pressure in an all-party meeting on 7 December. Sources say Finance Minister Pranab Mukherjee, on his return from Kolkata, wanted to hold a Cabinet meeting to formalise the decision to put FDI in retail on hold before approaching the all-party meet, but the PMO felt that any formal process should be avoided, as the Government did not want to rescind its decision completely.

But with opposition parties and many of its allies, including the Trinamool Congress, determined to force the Government to yield its position on the contentious issue, and a replay of 2008 nowhere in sight, the Congress was left with no option but to beat a hasty retreat, agreeing to suspend 51 per cent FDI in retail till a consensus is achieved among all parties. While this move meant a huge loss of face for the Government, its retreat also restored normalcy in Parliament after a 10-day blockade by the opposition.

Later, speaking in the Lok Sabha on the decision, the Union Finance Minister said that a consensus would be reached through consultations. “The decision on FDI in retail has been suspended till a consensus is reached through consultations with stakeholders,” he said, “Stakeholders include political parties and states.”
In his attempt to make FDI in retail a make-or-break issue, the Prime Minister seemed to have forgotten the fact that Amar Singh no longer had any magic wand, and even the Samajwadi Party—with its 22 MPs in the present Lok Sabha—would not back the Government as it had in 2008. Assembly elections in Uttar Pradesh are round the corner, and its support for FDI in retail as a policy would give an insurmountable advantage to its rivals: the Bahujan Samaj Party (BSP) and Bharatiya Janata Party (BJP).

If anything, the development has highlighted the glaring numerical disadvantage of the Government, now that West Bengal Chief Minister Mamata Banerjee has tasted blood by forcing the it to hold the FDI decision. Worse still, Mamata, with her 19 members in the Lok Sabha, is said to have been making a different calculation altogether.

Sources in the Trinamool Congress assert that a recent by-election result has once again proved that the Mamata wave is still high in West Bengal. An early Lok Sabha election—that is, before this wave starts to wane—may help Mamata sweep the state the way she did in the Assembly polls. If Lok Sabha elections are held in 2014 as scheduled, the result could be different.

The Congress is now looking at calling for a meeting of UPA allies, to be chaired by Sonia Gandhi, in a bid to mend fences with Mamata’s Trinamool Congress. But much would depend on the extent to which Mamata is ready to let go of her resurgent belligerence.

In any event, Mamata Banerjee’s new calculations don’t augur well for the UPA II. Things would be different if Mulayam Singh Yadav has a miraculous change of heart once again.

Miracles, however, rarely happen twice, even if they are manufactured.