A chief minister loses the plot in Uttar Pradesh. A challenger grabs the opportunity. But this ought to be about a fair deal for farmers, not the 2012 polls 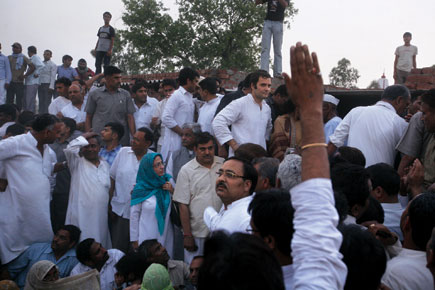 A chief minister loses the plot in Uttar Pradesh. A challenger grabs the opportunity. But this ought to be about a fair deal for farmers, not the 2012 polls.


A chief minister loses the plot in Uttar Pradesh. A challenger grabs the opportunity. But this ought to be about a fair deal for farmers, not the 2012 polls.

BHATTA AND PARSAUL, UTTAR PRADESH ~ The last time a farmer agitation broke out in Uttar Pradesh (UP), the Mayawati government was quick to grasp the volatility of the situation. In six weeks, Lucknow announced a new compensation package for land acquisition. This was in August 2010. Clashes had begun in Aligarh and spread to Mathura and Agra. The farmers of Western UP are a formidable force, known for clan and caste solidarity, that is not easy to control. Mayawati’s new compensation offer, they found, was still way below market levels. So three months later, in January, another agitation began. And the government remarkably let what was a gathering storm get bigger and bigger, ignoring their key demand: to have market-driven compensation rates for their land.

So, if Congress leader Rahul Gandhi smuggled himself into the midst of enraged farmers in that volatile area, offering gamely to lead the agitation—with the country’s media celebrating his brilliant guerilla tactics—it was thanks largely to Mayawati. It was her own government that gave Rahul Gandhi, in his spotless white kurta, the perfect picnic opportunity to ride this crest. His midnight arrest on 11 May was a TV spectacle. And his ‘reclaim UP’ campaign for the state’s Assembly election next year finally seems adequately energised.

Seen in the larger context of all the land agitations raging in India, the farmers’ protest in UP—given the sheer number of people and scale of land involved—was always a ticking bomb left unresolved. Four months had passed since January with farmers refusing to call off their dharna and Mayawati looking away.

District Magistrate Deepak Agarwal, responding to questions by Open three weeks ago on the status of the agitation, had described it as “ongoing but peaceful”. On whether a dialogue was in process, he had said, “Whatever we had to do, we have done. Whatever the policy level matters are, we impressed upon them that it has to be done by the government, and this is not the way it can be done.”

One month on, the agitation has snowballed into an unprecedented crisis, both in terms of its political fallout and the threat it poses to law-and-order in Western UP. Driving an SUV through the dusty lanes of Dankaur in UP’s fastest growing district Gautam Budh Nagar, Neetu, a young farmer, shares horrific details of last week’s violent crackdown by the state’s forces on farmers of Bhatta and Parsaul, the two villages at the centre of a four-month long struggle.

The plains that Neetu grew up on are witnessing sweeping changes. The vast stretches of land along the Yamuna River have become part of a vast urbanisation plan, a knock-on effect of the six-lane, 165-km long Yamuna Expressway being built by the Jaypee Group—an infrastructure conglomerate with interests in real estate—from Delhi to Agra. “This is perhaps one of the most imaginative projects in the country,” GN Garg, UP’s commissioner of infrastructure and industrial development, was quoted as saying in December 2010, referring to the collective fate of 1,187 villages between Gautam Budh Nagar and Agra, “At one go, the specifics of an area of 236,682 hectares with a population of 2,096,860 will change. If everything goes by plan, the future is mind-boggling.” The Expressway cuts through six districts—Gautam Budh Nagar, Bulandshahar, Aligarh, Mahamaya Nagar, Mathura and Agra, and planned alongside are a Formula-1 race track, a cricket stadium, a hockey stadium, five townships and an airport.

Not everyone, however, is sold on the UP government’s ultra-urban fantasy. On 17 January, farmers from 40 odd villages began a dharna at Bhatta village, 10 km from Dankaur town, demanding among other things amendments to the Centre’s Land Acquisition Act (which impacts each state’s policy), compensation for land in line with market rates (and not state-fixed prices) and reservation of jobs for farmers in development projects.

After the latest crackdown, farmers have fled their villages fearing arrests by the UP police. One such farmer, Gyanendra Singh, an ex–Delhi cop, says farmers have been objecting to these unfair terms since 2009, when they were first notified. “Some farmers even went to court against it and got ‘stay’ orders. Look, I too have worked as a government servant, but I can tell you this is injustice. The government is offering us Rs 880 per sq metre, and we hear private builders are charging Rs 15–20,000 per sq metre.” The government itself is charging Rs 5,500 per sq metre, according to the Yamuna Expressway Development Authority, more than five times what it is offering farmers. It is a land grab, he says.

Rahul Gandhi may agree, but long before he was seen being hauled off, the agitation had its own local leadership. In fact, Manveer Singh Tevatia, currently UP’s ‘most wanted man’ with a reward of Rs 50,000 for information on his whereabouts, had been invited by farmers to head the agitation for his reputation of having helped farmers in the neighbouring Aligarh district get better compensation in an earlier agitation. In an interview to Open, conducted in Parsaul village, a few weeks before he went missing after clashes on 7 May, he had vowed not to back down until the farmers’ demands were met. “The more police force they bring here, the stronger we will grow in numbers,” he had said, “They are dealing with Jats, Thakurs and Gujjars. The farmers here are fighters, not cowards. They are clear about their demands and are adamant. And when we say ‘fight’, we don’t mean with guns and bullets, but with ‘people force.’”

The agitators have widespread sympathy. Sociologist Dipankar Gupta describes as “criminal” the way in which UP has gone about land acquisition. “They have not listened to the signals before all this happened,” he says. It doesn’t help either that this is a region quick to adopt violence. “Politicians have earlier used this violence in their favour,” says Gupta, “Now it is working the other way.”

Ever since January, there had been ominous, if sporadic, clashes between the police and the farmers. Agitators had abducted state officials, and UP had deployed cops of the Provincial Armed Constabulary (PAC) to quell protests. Those, however, were not the first signs of trouble. Back in August last year, a township project proposed along the Expressway had set off clashes in Aligarh’s Tappal town. It was these that spread to Mathura and Agra. The Mayawati government upped its offer a month or so later, but then sat back in the belief that the anger had been calmed.

Evidently not. In the latest crackdown, unconfirmed reports gathered by speaking to affected farmers and villagers in the area put the number of dead at 15. The official death toll is just four, two of them personnel of the PAC. “Bodies of farmers were dumped in the fields and set on fire,” says one farmer from Usmanpur village. “Farmers are being treated as if they are worse than terrorists and Naxalites,” says Neetu, who supports the agitation, though he has accepted the Rs 8 crore (part of it still due) in compensation he has got for his land. But the agitation, he says, is not about big farmers like him. “Most own very small pieces of land, and are the worst sufferers of land acquisition. The compensation they get will not see them through. The land at least feeds the family. With their land gone, what will they do?” Good question. Does Mayawati have an answer?