Whether or not to support the UPA 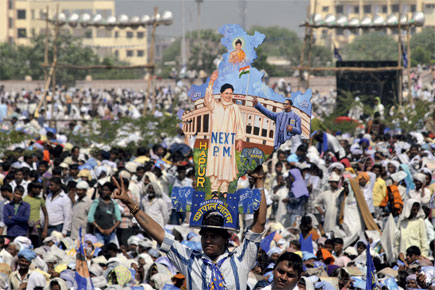 Whether or not to support the UPA


For BSP chief Mayawati, who has decided not to do anything right now that might send the UPA Government scrambling for survival, if not crumbling straightaway, it is a question of when the “right time” will be to do exactly that. Addressing mediapersons on 10 October in Lucknow, she preferred to send out ambivalent signals, saying, “The [BSP] national executive has decided to leave it to me to take a final decision [on withdrawing support to the UPA Government]. I have been entrusted to take an appropriate decision at the right time. Hence, I will have to look at all points and issues before taking a call on the matter.”

Within the party, however, enough hints have been dropped of which way she would go. At the BSP’s national executive meet, she asked party leaders to start preparations for early Lok Sabha polls. As a senior BSP leader present tells Open, the “right time” she had in mind could well be during the Winter Session of Parliament. “Behenji did not say when exactly she will withdraw support to the Government, but she told us that she would like to watch developments till the Winter Session.”

According to sources, the hour-long meeting came to an end once a proposal by Swami Prasad Maurya—the party’s UP Assembly leader—that Mayawati be bestowed with the responsibility of taking a final decision on withdrawal of support was passed unanimously by the national executive. In this meeting, though, Mayawati also told party leaders that she was not happy with the size of the crowd that turned up at the BSP’s rally in Lucknow a day before, say sources.

In that rally, held on 9 October, the first since the BSP’s drubbing in UP’s Assembly polls earlier this year, Mayawati hit out at the UPA Government’s policies but left enough space for ambiguity—and for her to justify not pulling out immediately. “The UPA Government has taken several decisions which are anti-poor… Corruption and nepotism have increased… We will consider tomorrow whether to continue supporting the UPA Government at the centre,” she said, but added that her party might support FDI in the retail sector in the future if it is found beneficial to farmers, small retailers and consumers. “If we find there are positive changes and it benefits all sections of society, in future we may welcome the policy,” she said.

Mayawati said that the present political scenario is such that a general election might be held before schedule, and that BSP cadres should gear up for snap polls. Accusing the Government of a ‘lackadaisical’ approach towards bringing back black money allegedly stashed away in foreign banks, and of various scams, Mayawati asked her partymen to work towards strengthening the BSP organisation. She also warned them against the designs of other parties. “Since the UPA Government has not done anything in the interest of the country and the people, it can go all out to woo the electorate by luring them through tall promises which will not really benefit people,” she said, “We have to remain vigilant on this count as well.”

As things stand, the Bahujan Samaj Party, with a tally of 21 MPs in the Lok Sabha, extends external support to the UPA Government at the Centre, which was reduced to 254 MPs—17 less than the halfway mark of 271—after the Trinamool Congress withdrew support last month. The Samajwadi Party, which has 22 MPs, is another crucial outside supporter of the UPA. These two tempestuous UP rivals, despite lambasting the Government for following what they term ‘anti-poor, pro-rich policies’, have so far desisted from pulling out.

If the two-day drama of the BSP, watched with bated breath by the Congress, has ended with UPA managers heaving a sigh of relief, it has also cramped the SP’s space for political manoeuvres. The hectic activity witnessed in the SP office in Lucknow on 9 October—once Mayawati put the UPA on tenterhooks—was replaced by an unusual silence a day later as soon as Mayawati announced her decision to defer the matter. Sources in the SP say the party would meet soon to review the situation arising from the BSP’s latest guessing game and decide whether to support the UPA Government. With Mayawati refusing to give it an opportunity to hold the UPA to ransom, the SP has started using other devices to up its ante vis-à-vis the Congress. No sooner had Mayawati announced her decision than SP leader Mohan Singh sought a probe into allegations levelled by Arvind Kejriwal against Robert Vadra, son-in-law of Congress President and UPA Chairperson Sonia Gandhi.

It is obvious now that while SP Chief Mulayam Singh Yadav is keen on an early Lok Sabha election (to take advantage of a wave in UP that brought his party to power in the state a few months ago), he does not want to be seen as the one responsible for the UPA’s fall. On her part, Mayawati is not keen on facing another poll anytime soon, since she fears a loss of seats, says a senior BSP leader. Also, she will not rock the UPA boat if she feels that the Government can survive without her help, adds the leader.

It is this mutually reinforcing dilemma of the SP as well as BSP that has so far been working in favour of the UPA. Yet, the mood at the BSP’s national executive meeting was one of moving past it. “The last two days’ developments have shown that Mayawti, whether she is prepared for it or not, would have to take a final decision in the next few months,” in the words of a senior BSP leader.

That Mayawati is not prepared for any such decision is clear from the fact that her party’s rally of 9 October, though crowded, was not as well attended as she had hoped. Nor is she unaware of the fact that it is still too early for anti-incumbency to set in against UP’s SP government.

In addition, Mayawati’s political stature among a section of Dalits has lately become precarious on account of a rebellion within the party. Ever since the BSP suffered a defeat in the UP Assembly polls, influential party members have been in open revolt against her, accusing the BSP chief of deviating from Kanshi Ram’s principles and weakening the cause of Dalit upliftment by aligning with upper-caste political forces. The rebels, who have been campaigning heavily in UP and other parts of the country, have made things worse for Mayawati in recent months. Just a day before the BSP rally in Lucknow, party rebels had organised a convention at Delhi’s Constitution Club, where they released a ‘chargesheet’ against her.

All signs suggest that pushing for an early Lok Sabha election is not in Mayawati’s interest. Yet, almost all senior leaders of the BSP know that she cannot defer the matter indefinitely. Time is indeed running out for the BSP. Whether it is running out for the UPA, too, is a question that has no clear answer at the moment.