A 12.5 million-strong sect in Bengal has ditched the Left and might vote en bloc for Didi because their guru wants them to. 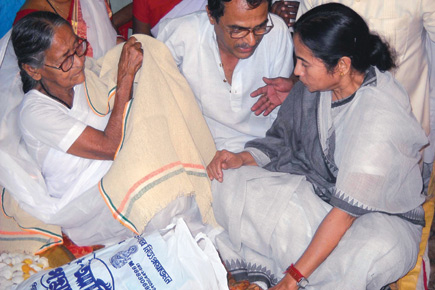 A 12.5 million-strong sect in Bengal might vote en bloc for Didi because their guru wants them to.


Trinamool chief Mamata Banerjee has just been awarded a crucial vote clincher for the next Assembly polls in Bengal that she, anyway, seems set to win. A 12.5 million community of scheduled castes in Bengal, Matuas, who play a decisive role in 74 Assembly segments, has made her their ‘chief patron’. This well-organised community has always been wooed by political parties, and has, till very recently, been a solid ‘vote bank’ for the CPM. The tide started turning slowly in the 2006 Assembly polls, and then the 2009 Lok Sabha polls when they started supporting the Trinamool Congress.

The Matua sect was founded by Harichand Thakur at Gopalganj in Faridpur province of present-day Bangladesh in the mid-19th century. Though a Brahmin, Harichand developed a deep empathy for the socially disadvantaged sections of Bengali society, mainly the present-day scheduled and backward castes. He preached love, tolerance, gender equality and non-distinction based on caste, creed and class, drawing thousands from Faridpur, Khulna and neighbouring provinces to the new sect that he named Matua (meaning: to remain absorbed in meditation).

Matuas don’t practice Vedic rituals, are monotheist, and believe that salvation lies in faith and devotion; singing hymns in praise of their deity is their way of prayer and meditation. Harichand’s son Guruchand consolidated the sect, which lives by a set of 12 commandments (Dvadash Ajna).

Ever since the partition of Bengal, swarms of Matuas have migrated to West Bengal, settling down in districts bordering Bangladesh. In 1948, Guruchand’s grandson Pramatha Ranjan Thakur, who was a barrister at the Calcutta High Court, purchased land to set up the sect’s headquarters at what he christened Thakurnagar, about 65 km north of Kolkata, where a massive fair attended by millions of Matuas is on now. It was this ‘Baruni’ fair, which started at Harichand’s village Orakandi in Gopalganj and shifted to Thakurnagar in 1948, that Mamata went to on 14 March and met the sect’s spiritual leader Binapani Thakurani, called ‘Boroma’ by Matuas. Boroma garlanded Mamata and handed her a letter stating that she (Mamata) had been made the Matua Mahasabha’s chief patron.

Though none in the avowedly apolitical Mahasabha are saying it, most members of the sect will likely take the cue from this appointment and vote en bloc for the Trinamool. Many of the sect had done so in the Lok Sabha polls last year, but with this development, the support for Mamata has been sealed. Many influential people in the sect blame the CPM for using Matuas as a mere ‘vote bank’ and charge Bengal’s Marxists with failing to address their needs, all of whom came to West Bengal from East Bengal (then East Pakistan). Their poor financial plight during the long Marxist rule in Bengal has made Matuas angry and turned them away from the CPM.

The reason all political parties woo Matuas is because they’re one of the best-organised communities in the country. They are divided into registered groups of 500 each, with each group having a ‘dalapati’. The dalapatis maintain a firm grip on all aspects of the lives of group members. A ‘blessing’ from the top to a politician is enough to make Matuas vote for that person. That’s why Brinda Karat, CPM state secretary Biman Bose, Forward Bloc chief Ashoke Ghosh, and former transport minister the late Subhas Chakraborty, had all rushed to their spiritual head before the 2009 polls to seek her blessings. That she didn’t give any to CPM leaders is said to be the reason behind most Matuas not voting for the Left in last year’s polls.

Trinamool has been assiduously courting Matuas, with its senior leaders showering attention and development projects on Thakurnagar and cashing in on their disenchantment with the Left. Having bagged the favour of Matuas Mamata has boosted her already bright chances of winning the next Assembly polls and attaining her long-cherished goal of dislodging the CPM-led Left Front from power in Bengal.