Married to My Rapist

There are places in India where rape is grounds for marriage. In some villages in Murshidabad, for example 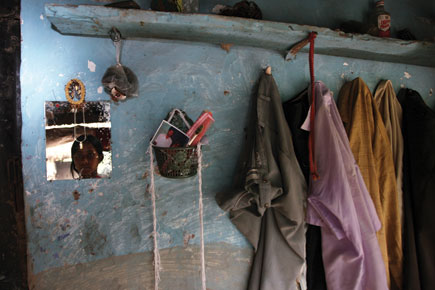 There are places in India where rape is grounds for marriage. In some villages in Murshidabad, for example


Zareena Khatun, 19, looks like the sort of lovesick girl that you cast a fond eye over, half-seeing your own early romantic self. She sits outside her house on a straw mat, her knees drawn up to her chin, gazing at the rain with an all-absorbing melancholy. Intrude into her reverie with a question, and she’ll act like she didn’t hear you, chewing absently on a fingernail painted a 90s starlet-maroon. But ask her about the young man in the denim shirt whose framed photo hangs by her bedside, and she’ll say his name softly, blush and look away.

“Newton Patua.” The 22-year-old son of a silk weaver and a student of Bengali in Bolpur College, Newton used to live across the road from Zareena’s home in Jhilli village in Khargram tehsil of West Bengal’s Murshidabad district, and he is now her husband. But their first meeting could not be described as either neighbourly or domestic. “I was sleeping upstairs deep in the night, two years ago,” says Zareena, in a voice with flattened affect, “when he came in through the window of my room, caught hold of my mouth, stuffed it with cloth, and raped me. Then he ran away, and I came down and told my mother what happened.”

“We filed an FIR the next day,” says Zareena’s mother. That’s when the story took an unusual course. After Newton was taken into judicial custody, his parents approached Zareena’s and offered to get the two married. Sitting in on the meeting were two members of Bhalo Manush (literally, Good Men), a select group of worthy locals such as schoolteachers and government servants, who are charged with preserving the honour of Jhilli and the 17 surrounding villages. The Good Men, along with the two sets of parents and the girl’s lawyer, agreed that it would be in everybody’s interest to get the rapist married to his victim. Newton would be spared five to eight years of incarceration, the girl would get married despite no longer being a virgin and her father wouldn’t need to scrape together a dowry, even though the boy was from a better educated family and had well-off relatives, including a schoolmaster brother-in-law, and an uncle who was, Zareena says reverentially, “a doctor in Kolkata”.

So, an affidavit was filed, stating that Zareena wished to marry Newton, and he was released on the condition that he would do so. He did, and left the village almost immediately afterwards, explaining to his father-in-law that he needed to complete his college degree to be able to support his new wife. Meanwhile, Zareena got pregnant, dropped out of school, and had a miscarriage. She hasn’t seen or heard from Newton in more than a year, though her father has heard rumours that he finished his course and doesn’t plan on returning to Jhilli anytime soon.

The idea of marrying a rapist to his victim sounds unimaginably wrong. On Women’s Day last year, when ex-CJI KG Balakrishnan suggested that rape victims ought to be allowed to exercise “their personal autonomy” if they wanted to marry their rapists or have children that resulted from sexual assault, he was vociferously condemned by women’s groups and the media. Yet, around Khargram tehsil in Murshidabad district, that doesn’t seem to be considered an especially uncommon, or even undesirable, way for a rape case to end.

Zareena’s father, Sameer Sheikh, a lottery shop owner, regrets letting Newton get away—though it’s not clear whether as rapist or son-in-law. “I knew it was a bad idea to resolve the matter that way, and I never would have consented to this marriage under normal circumstances,” he says, adding, “When Newton’s parents heard that we’d filed the affidavit [which would enable his release] they immediately distanced themselves, and started talking to me rudely. Then I realised we had been manipulated, and that they wouldn’t keep their promise. It’s all because of this wife of mine. She wanted a better house, better food, everything, and their family is better off, with big-city relatives.”

His wife shakes her head remorsefully and says, “In the whole of Jhilli, and all the surrounding villages, everybody knows what happened to Sameer Sheikh’s girl. How will we ever get her married now?” Zareena’s grandmother, an old woman bent like a boomerang, and clad in a white sari faded to gauze, suddenly speaks up: “Aren’t you going to ask me what I want? I want sazaa, justice for my granddaughter. Phaansi!”

Ask Zareena what she thinks of Newton, though, and she says, almost to herself, “Bhalo lage (I like him). If he comes back and asks me to go away with him, I will.” In the meantime, however, she’s afraid to go anywhere alone. “I used to go out by myself, but now I’m too scared. Besides, the people in the village talk.” As she waits for the prodigal rapist, she broods by his picture in her room, wallpapered with posters of polychromatic Bollywood couples hugging or capering across unnaturally ultramarine skies. In a corner, next to a near-lifesize poster of actor Shahid Kapoor is a poster bearing a message wreathed in flowers: ‘Love is a secret language that only loving hearts understand.’

Morality is Abdul Kamaluddin Sarkar’s preferred tongue. As the gram panchayat pradhan, he’s a righteous Good Man, one who is always entitled to a plastic chair while everyone else sits on the floor. “I went to the meeting after I got to know both parents agreed to the marriage,” he says, glancing down from his perch. “In this case, as in all such cases, we try to bring about a mimanksha, an understanding, like getting them married. When there is a class or caste difference, a suitable monetary sum is decided on. If neither works, we leave it to the courts.” Most families prefer a speedily delivered mimanksha to the indefinite wait for justice. “We end up negotiating about ten such cases every year,” says Sarkar, “and in our experience there’s no such thing as a girl’s family that’s not ready [to settle for marriage or money].”

MD Nur Nabi, Zareena’s Khargram-based lawyer, who often finds himself in the role of a go-between, concurs. “Eighty per cent of the rape cases I see are false—they’re a popular means of settling scores in disputes around here. Of the rest, 80 per cent are sorted out by way of an understanding. In 20 per cent of the cases, this means marriage, of which about 90 per cent end up happy.”

“Happy?” the photographer and I exclaim. “Yes, happy,” he repeats patiently. “For two reasons. One, the rapist always has this thought at the back of his mind: ‘If I kick her out or otherwise mistreat her, I’ll end up behind bars once again.’ Second, he feels, ‘I’ve misbehaved with her, let me rectify it.’”

Those sound like improbable explanations that would only serve the interests of frequently misbehaving men. But Nabi claims to have evidence to support his theory: a couple brought to an understanding in 2005 in the nearby village of Gowai are now “enjoying as husband and wife”. According to the FIR filed on 10 February that year, Mallika Ghosh had gone to the sugarcane fields the previous evening for a “nature walk”. There, says Nabi, translating from the statement in Bengali, she was “attacked from behind by one Gadadhar Ghosh, who then proceeded to rape her forcefully, without [her] consent”, warning her that he would kill her if she told anyone about the assault.

The statement was supported by two witnesses returning from the paddy fields, who’d apparently heard her screams. The accused was sent to judicial custody, where he enlisted Nabi’s help. A chargesheet was filed after an investigation and the medical examination of both parties—which apparently only served to prove that they were both “capable for (sic) sexual intercourse”. In the meantime, the two families agreed to get their respective wards married. “When I met my client then,” says Nabi, “he said that he was guilty, but that if the girl wanted to marry him, he too wanted to marry her.” So, Mallika filed an affidavit, Gadadhar was released, and they were married a month after the alleged assault took place.

Today, they live in Gowai with their son and daughter, beside a mossy-green pond shaded by tamarind and neem trees. Unlike most houses in the village, which have straw roofs and mud walls studded with cow-dung cakes, Gadadhar has earned enough from cultivating rice on his six bigha of land to afford them a half-constructed dwelling of brick and cement.

We head up to the roof, trailed by a chattering crowd of curious villagers. Egrets squabble on a tree behind, and a cow lows. “How did you meet your husband?” we ask Mallika. “We had a sort of love m arriage,” she replies shyly. A few awkward enquiries later, she elaborates: “It wasn’t by force. I liked him from the beginning. We’d seen each other around, in the fields, on the path.”

We try her mother next. “Did you feel uncomfortable marrying your daughter to this man?” “No,” she says, motioning across a big pond in the centre of the village, to a small mud house, “We live close by, if she needs us.” “Getting him to marry my daughter was the whole point of filing the case against him,” adds her husband, Rabindranath. “His father was against it because we are poor. Finally he agreed. He died soon after the wedding.” A villager who professes to be “like Gadadhar’s brother” adds that everyone in Gowai had disapproved of the match since they belonged to the same village.

Throughout the meeting, Gadadhar looks tense and suspicious. Apart from asking the people accompanying us just why he should consent to being interviewed, he says little. He only begins to unclench his jaw once we prepare to leave. He watches us from the threshold of his home, his six-year-old daughter in his arms. We turn the corner, past a jackfruit tree, several piles of meticulously gathered cow dung, and two goats. And their telltale past is behind them once again.

Some names have been changed on request