Zaffarwal went to Pakistan several times. He says that Khalistan terrorists were puppets in the hands of the ISI 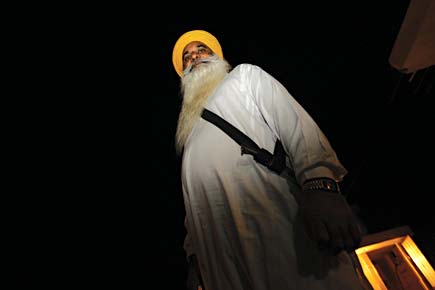 Zaffarwal looks more like the part-preacher, part-homeopath that he now is, than the terrorist he once was


AS THE sun sets behind the trees, we are still a few kilometres away from our destination: Zaffarwal village in Gurdaspur district, Punjab. The traffic is heavy. “A couple of decades ago, there would have been no traffic. But travelling on this stretch then would have been suicidal,” says a former terrorist accompanying us. Because, Wassan Singh Zaffarwal, the man who proclaimed Khalistan from the Akal Takht at the Golden Temple in 1986, was among the most dreaded men in Punjab at that time and this was the nerve centre of his operations. As a member
of the original Panthic Committee formed in 1986 to carve out Khalistan, he was a commander of men who would emerge from the fields to kill in the name of the ‘Land of the Pure’. By the time terrorism in Punjab had decisively been dealt with, Zaffarwal and his men (of the Khalistan Commando Force-Zaffarwal) stood accused of hundreds of killings.

As we approach his house, Wassan Singh Zaffarwal, 52, stands outside shouting directions to the men in his fields. With his grey flowing beard and white dress, he looks more like the part-preacher, part-homeopath that he now is, than the dreaded terrorist he once was. “I go around the villages here every few days and speak at small, religious gatherings against drug abuse, dowry and Sikhs cutting their hair,” he says.

Six years ago, after his release from jail, Zaffarwal began his practice as a homeopath. He says he picked up homeopathy ‘skills’ at Schilieren in Switzerland, where he stayed in political asylum from 1996 to 2001, after “Pakistan turned its attention back to Kashmir”. When Operation Bluestar happened, Zaffarwal was a leader of the workers’ union at a cloth mill; he was close to Bhindranwale, but says he was at home during the operation.

“After Bluestar, the Army and police picked me up twice while I was returning from the mill with fellow workers. We were tortured, and I decided there wouldn’t be a third time. One evening, I was sitting here on the terrace when I saw army men surround the village. I jumped off and dashed through the fields,” he recalls, “The Tenth Guru said, when all options fail it is righteous to take to violence. No one began the Khalistan movement, it was forced upon our community.”

He speaks with no remorse, but skips the details of the violence he was accused of—from a bid on DGP JF Riberio’s life to communal killings. “We were puppets in the hands of the ISI,” he says. Zaffarwal went to Pakistan several times between 1984 and 1988, only to stay on the last time. “The ISI put us up in Lahore, and we soon realised that it’s the agencies and not ministers that run the show there,” he says, “They controlled the movement… we only obeyed.”

Zaffarwal returned to the terrace and his fields nearly two decades later. He has been acquitted in cases that range from sedition and murder to ordering mass killings, mostly on lack of evidence. Now, he says, “Patients turn to me when all other treatments fail.” He hopes to save a life or two with his new skills.