Law Is above Expediency

Jurisprudence is just as vital to the idea of India as maintaining communal equilibrium. 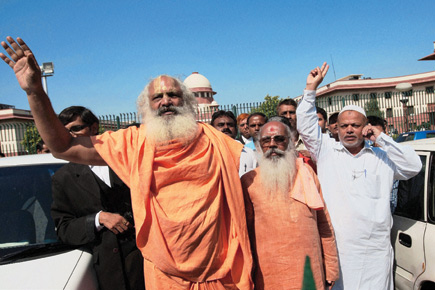 Jurisprudence is just as vital to the idea of India as maintaining communal equilibrium.


The national focus is back on the Temple-Mosque dispute in Ayodhya, the impact it will have on the politics and idea of India. But, let us not miss the lessons that the short period in which the Supreme Court (SC) intervened in the matter has thrown up. Jurisprudence is just as vital to the idea of India as maintaining communal equilibrium.

In asking the Allahabad High Court’s Lucknow bench to put off its 24 September judgment on the decades-old Ram Janmabhoomi-Babri Masjid title suits on its very eve, the two-judge division bench of the SC erred. So it was left to the higher, three-judge bench headed by Chief Justice of India SH Kapadia to correct course. It did just that on 28 September, by pronouncing a single paragraph order dismissing the special leave petition (SLP) filed by Ramesh Chandra Tripathi seeking a deferment of the High Court’s (HC’s) order in favour of a last-ditch effort towards an out-of-court reconciliation. The bench, comprising Chief Justice Kapadia, and Justices Aftab Alam and KS Radhakrishnan, observed in its brief order: ‘Having considered the detailed arguments, we are of the view that the special leave petition is to be dismissed. It stands dismissed.’ It gave no reasons for the dismissal, presumably because they were well known and needed no reiteration.

It was clearly known at the time when Tripathi petitioned the Allahabad High Court, and later the SC, that the appeal option was available to all parties to the dispute after the High Court’s judgment due on 24 September (then). The Allahabad High Court, after pronouncing its order, could have granted leave for appeal to the losing parties to move the Supreme Court and suspended the operation of the judgment.

Even if it did not do so, the parties had the option of approaching the SC under Article 136 of the Constitution, seeking a stay of the judgment until the disposal of the appeal by the apex court. Yet, the SC’s division bench entertained him while the HC’s judgment was pending. Legally speaking, the SC did not err in entertaining the SLP, but it did set a new precedent by telling the HC to put off its order.

When Tripathi approached the HC’s Lucknow bench on 13 September with an application to defer its judgment in favour of a compromise, the HC had already been through the process. It had offered the parties concerned a chance to explore the possibility of a settlement on 26 July, when it reserved its judgment. Tripathi did not even respond to the court’s suggestion. The HC bench, while rejecting his plea, made detailed observations to this effect, highlighting his conduct. Justices SU Khan and Sudhir Aggarwal observed that Tripathi’s counsel did not advance any argument during the court’s efforts to facilitate a settlement. “Though at one point of time, he (Tripathi’s counsel) informed the court that he will address the matter on merits, when his turn came, he did not appear,” the court observed. He surfaced weeks later as the judgment day neared and filed an application that the HC rejected as “mischievous” and even slapped a fine on him.

Tripathi then approached the Supreme Court and filed his SLP which cited the aversion of a post-judgment communal flare-up as grounds for deferring the judgment. During the hearing of the matter by the three-judge SC bench, former Attorney-General and Senior Counsel Soli Sorabjee, who appeared for the Muslim Law Board, said law and order apprehensions were not grounds enough for withholding the judgment; the maintenance of law and order was the state government’s responsibility, and that could not be a valid reason for postponing the judgment, Sorabjee argued, and rightly so. He cautioned the SC against setting a bad precedent by deferring the HC verdict.

Even Attorney-General and the Centre’s counsel Goolam E Vahanvati said that though the most preferred solution to the Ayodhya problem would be a settlement, that “has not taken place and the uncertainty which prevails should not be allowed to continue”. “We can’t keep the law and order machinery in sustained animation,” Vahanvati pleaded with the SC while referring to the large-scale deployment of Central forces in anticipation of the HC judgment.

In dismissing Tripathi’s plea, the SC stopped itself from setting a precedent that would have been both legally untenable and unfortunate.