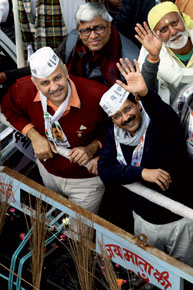 The banners are up, the chairs laid out and 68-year-old Sukhi Ram has his seat in place, just ten metres away from the makeshift stage where the show is set to begin. As local leaders begin to address the crowd, just to get things started, amidst cheers of ‘Inqualab Zindabad’ and ‘Vande Mataram’, he pulls out a beedi from under the shawl covering his legs and hands. The rain has settled after a day-long spell, leaving a muddy trail of puddles along the village dirt tracks, but the January evening in Delhi is chillier than usual. Snarling at an excited bunch of women chattering next to him, he lights the beedi with a match stick borrowed from his brother sitting ahead of him. “Harr election ka tamasha hai, chaalees saal se dekh rahein hain (Every election is a circus, I’ve been watching them for forty years),” he says aloud, looking for his own audience. The people seated in the rows around him laugh, seemingly in agreement. Sukhi Ram and the crowd of perhaps 500 people gathered around the stage are residents of Sanjay Colony in Bhatti Mines, a village located on the edge of South Delhi and along the Delhi- Haryana border. Home to about 50,000 people, it is essentially a colony of labourers that was set up by the government in the 70s, named after Sanjay Gandhi.

With no proper roads, barely-there municipal facilities and a serious monkey menace owing to the neighbouring Asola wildlife sanctuary, the nondescript colony barely a few kilometres away from the glittering line-up of farm houses in South Delhi’s Chhattarpur often remains unnoticed on the map. Though people sarcastically laugh each time they are asked to clap for local candidate Kartar Singh Tanwar, a local Gujjar goon and former BJP MLA now fighting the Delhi election on an AAP ticket, boredom gradually sets in, and after an hour of waiting, Sukhi Ram says impatiently, “Vote toh theek hai, hum Kejriwal ko dekhne aaye hain.”

As if on cue, there is a flutter on the stage and the arrival of Aam Aadmi Party (AAP) leader Arvind Kejriwal is announced. The catchy ‘paanch saal Kejriwal’ anthem for the party, composed by Bollywood music composer and AAP supporter Vishal Dadlani, starts blaring through loudspeakers; and parts of the crowd, including Sukhi Ram, start clapping along with the beat. Some seem ready to unleash a few dance moves, but for the grey Tata Innova that had made its way through the muddy dirt lanes and has now disappeared behind a row of shanties. Minutes later, amidst cheers, the ‘Mufflerman’ appears on stage waving to the crowd—a navy blue muffler carefully wrapped around his head and ears, supported by the Aam Aadmi Gandhian cap.

Kejriwal starts with the usual ‘Bhaiyon aur behanon’ address to the crowd, his tone quite familiar from the various radio ads doing the rounds for the past few months. His speech begins with an apology for his resignation and for letting down voters the last time, moving on to listing the expenses for bijli-paani since the formation of the Modi Government at the centre and mocking its development agenda. He promises to build pukka roads in the village and goes on to undercut his former party colleague and arch-rival Kiran Bedi, calling her a victim of the BJP, saying that the BJP will eventually put all the blame for having lost to AAP on her. As Sukhi Ram begins to display signs of boredom, he says, “Baat toh sabhi karte hain, par yeh banda mazedaar hai (Everyone is a talker, but this man is interesting).” Minutes later, as the evening chill sets in, he leaves for home. Kejriwal goes on with his speech for the next 20 minutes before heading off to his next election Jan Sabha, being held in Sangam Vihar, Delhi’s largest unauthorised colony.

As reflected in Sukhi Ram’s casual remark, whether the party wins a majority or not in the coming election, the AAP party leader and founder Arvind Kejriwal seems to be a force to reckon with even now. Despite the media writing him off after his 49-day-stint as Chief Minister of Delhi, and the party’s staggering defeat in the Lok Sabha election last year, Kejriwal—with his team of psephologist Yogendra Yadav, Manish Sisodia, Sanjay Singh and former journalists Ashutosh Gupta and Ashish Khetan—has managed to hold ground.

As reports of the AAP garnering a considerable amount of support for the coming election trickled in, against the backdrop of a rather dull turnout for a rally held by Prime Minister Narendra Modi on 12 January, the BJP too swung into action. National BJP head Amit Shah arrived in the capital, asking the Delhi unit to strengthen its social media unit and booth network at the grassroot level (an idea pioneered by the AAP in the last election); the party, known for not having fielded a chief ministerial candidate in the last three elections, chose former AAP member Kiran Bedi to stand as the BJP’s proposed Chief Minister against Kejriwal.

According to noted psephologist Sanjay Kumar of the Centre for the Study of Developing Societies (CSDS), which conducted a survey of voting patterns in Delhi recently, the party is pegged to increase its voter base from 29 per cent in December 2013 to about 33 per cent in the 2015 election. “The increase in voter margins is a clear indicator of the growing popularity of the party, and hence Kejriwal,” he says. As pointed out by Kumar, while Kiran Bedi remains a mere face of the BJP in Delhi, Kejriwal is the party. “Despite the huge machinery of volunteers and leaders, Kejriwal continues to be the pulling factor. Bedi might help consolidate the existing BJP vote in the city (that rests essentially with the upper middle- class) but AAP would collapse without Kejriwal; he is the party,” says Kumar.

As detailed by Kumar and his team in the report, the support base is likely to have increased in the outer Delhi parliamentary constituency, the rural part of Delhi where the party failed to win any seats in the last election. These areas consist of localities such as Narela, Mudka, Kanjhawala, Matiala, Chattarpur, Tughlaqabad and Badarpur—mainly urban villages and slum dwellings, a swiftly growing support base for the party. While the rural belt is known to make election choices on the basis of caste and the decisions of village pradhans, the party’s emphasis on rudimentary issues like water, electricity and law-and- order is believed to have struck a chord with voters in jhuggi jhopdi (shanty) clusters that house a population of about 1.5 million voters across the city. A case in point is Kejriwal’s announcement promising free-hold rights to residents of re- settlement colonies of slum clusters, in riot-hit Trilokpuri and Seelampur in Delhi. While the party has particularly stayed away from identity politics, Kumar believes that this election will also see a consolidation of the Muslim vote in the favour of AAP.

“This is mainly because of the absence of the Congress,” reasons Kumar. While the Congress has virtually disappeared from the election fray and is mainly contesting its personality driven seats to ensure a feeble presence in the Assembly, the Congress vote in slums and Muslim dominated areas has now swung to support the AAP. “The Congress defeat in the Lok Sabha election and its virtual disappearance from the election scene has left a huge vacuum in Delhi’s politics. With its choice of candidates and consistent presence through campaigns and Jan Sabhas, AAP has managed to garner a larger support base for itself,” Kumar adds.

While the party has deliberately dropped several of its sitting MLAs and given tickets to 25 volunteers who have a strong connect with local population bases, ten more candidates who were part of other parties like the Congress, BJP or even the BSP, who were strong leaders in the outer Delhi base, have been roped in. “The idea is to mobilise local support and fill the gap of the voter base fractured by caste politics in this zone. While we continue to stick to issues and have stayed out of identity politics, the consolidation of votes can happen only if a leader is chosen with strong support and a connect with the community,” says a volunteer from the Dwarka constituency where the party has fielded Adarsh Shastri, grandson of former Prime Minister Lal Bahadur Shastri and a contestant from the Allahabad Lok Sabha seat for the party. A former sales head with Apple, Shastri fits the party’s former strategy of roping in urbane educated young people; even he is being seen holding Jan Sabhas in jhuggi clusters, talking about issues of drainage pipes, giving a tough fight to former Congress MP and Poorvanchali leader Mahabal Misra. While members of the party have been actively campaigning in their respective constituencies, Kejriwal is making at least three appearances in each of the 70 Assembly constituencies. Nearly 50,000 volunteers from Delhi and other state units are actively campaigning as well.

While complaints of local goons contesting elections on AAP tickets in Chattarpur and Tughlaqabad have surfaced, mainly from party founder Prashant Bhushan, Kumar feels that this is just a sign of the AAP becoming mainstream. “Earlier, the party had painted a rosy picture of idealism and politics. Now, with complaints trickling, it is sending out messages of being a mainstream political party, [of] meaning business,” he says.

AAP leaders and volunteers claim that this rise in popularity is due to the consistent door-to-door campaigns that began in November last year, and the projection of a ‘positive’ image of the party through the social media and other means. “Many people shut their doors [in] our faces initially, but that’s the point of having a strong local leadership at the booth level,” says a senior party leader. “We made sure our community volunteers reached out to [people] with the distribution of pamphlets,” he says. Arvind Jha, a party volunteer who heads the infotech and social media unit of the party, says that this was followed by a consistent social media campaign on platforms like Twitter and Facebook. Some of the successful campaigns included exposing photoshopped images floated by BJP MLAs for the Swachch Bharat campaign.

While the party has stuck to its guns and only fought on issues plaguing the electorate, Kejriwal has recently been accused of taking personal potshots at rival Kiran Bedi by first calling her a scapegoat for the BJP, then labelling her an ‘opportunist’ on AAP posters, and recently, objecting to not being invited for the Republic Day ceremony while Bedi was (she herself lashed out against the AAP for illegally using her picture in their posters.) Asked about indulging in such a childish political slugfest, party member Ashutosh Gupta retorted sarcastically at a press conference: “Anyways, no one takes us seriously. So why this fuss over this childish banter? We are here to win the elections, and will manage to do so.”