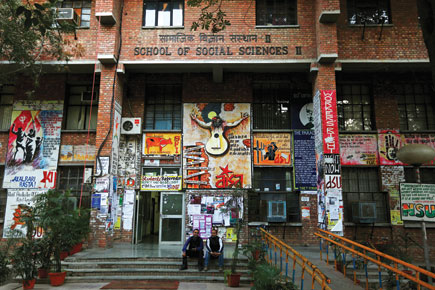 For decades, Jawaharlal Nehru University was the place to indulge, with a kind of impunity, in fantasies of revolution. Its 1,000-acre forested sprawl on the Aravali hills seemed to foster a youthful defiance rarely seen on Indian campuses. The hammer and the sickle were the ideological weapons of choice at JNU, often jokingly referred to as ‘the fourth red state’ after West Bengal, Kerala and Tripura. Even as the Left struggled to find a foothold in Indian politics, large numbers of students at JNU remained loyal to the fold. They were revolutionaries who were not yet ready for a revolution. As long as they were in the protective shade of the campus, they could grow and pretend to be adults, without suffering the consequences of being one. They would be forgiven just about anything—insulting Hindu deities, inviting separatists to address gatherings, even the moral callousness of elevating Maoists to heroes. Their luck, however, seems to have run out with the arrest of JNU Students’ Union President Kanhaiya Kumar on charges of sedition. Shock and an open desperation are writ large on the faces of students as the tenuous peace at the university lies shattered in the wake of the controversy.

A dozen policemen stand guard at the main gate of JNU even as it remains locked. A day after a group of lawyers attacked JNU faculty and media persons at the Patiala House court complex where Kumar was to be produced, the university resembles a battle zone. Half a dozen lawyers claiming to be supporters of the Bajrang Dal shout slogans demanding “JNU ko band karo (shut Down JNU)”. A few metres away, a group comprising citizens from Munirka village and local BJP leaders awaits its turn to protest. Those entering the university are doing so through the small gate at the back meant for the Vice-Chancellor’s entry. Once inside, the situation is no different. A group of teachers has gathered near the statue of Jawaharlal Nehru in front of the Administrative Block and is reading a pledge of support from over 400 academics from international universities for their movement to protect the autonomy of the university. Students continue to express solidarity to the beat of drums and claps. The atmosphere is heady, seductive to the young minds who keep filing in, joining the group.

A melting pot of cultures and disciplines, JNU is facing the biggest crisis of its half-century-long history. Those who call this campus home look rattled, but they are determined to fight it out even as the eyes of the nation bear down on them. “Universities are open spaces, providing support to arguments and counterarguments,” says Rakesh Batabyal, a professor of Media Studies at JNU. “This makes them susceptible to charges of partisanship, of mistaking partial knowledge and some methodologies for the entire thing, which is not true. JNU is going through that tension of ideology and principles.”

Twenty-six-year-old Alok (last name withheld on request), who is pursuing an MPhil in International Relations, is among the hundreds of students standing by the university and the values they say it represents. The eldest son of a teacher from Varanasi, Alok graduated from Purvanchal University five years ago and came to JNU. “The difference between JNU and other universities is that JNU doesn’t teach fetishisism. You are encouraged to question everything. It promotes critical thought and any state or government will have a problem with that,” he says. The idea of a free country, says Alok, is inseparable from the idea of every individual’s identity.

That JNU was not always politicised may come as a surprise to many. “The Left was opposed to the establishment of such a university,” says Batabyal, who has authored a book on the history of JNU. “They felt it was too elitist.” In the initial years after its inception in 1969, student politics hardly went beyond informal discussion. The first brush with Left politics came with the violent linguistic agitations and the Naxalite violence that shook academic institutions in West Bengal, Andhra Pradesh and Maharashtra. At the time, JNU provided a safe haven to scholars from universities in the affected states. ‘It was offering space to an intellectual class who would envision academia not as an extension of the state or the government department, but as a habitus of both mind and body,’ writes Batabyal in his book. With the setting up of the School of Social Sciences in 1970, and the School of International Studies, SIS, in 1955 (it was merged with JNU in 1970), the flavour of the university changed perceptibly. The new faculty wore their radical politics on their sleeves. Things started to really heat up when a student named Prakash Karat joined the university in 1970. He came armed with a degree from Edinburgh University and started a students’ union that later merged with the Student Federation of India (SFI), the CPM’s student wing. It became an important communist signpost in north India. From the standpoint of the CPM, JNU was like a clean slate where it did not have to fight it out with the likes of the Chhatra Parishad in West Bengal, the National Students’ Union of India in Kerala, the socialists and the RSS in UP and Rajasthan. Karat’s popularity among the then-apolitical students of the SIS gave the party an excellent opportunity to establish its credentials in the campus. In later years, Sitaram Yechury further strengthened the Left presence in the university. He courted arrest during the Emergency and returned to reap his political reward at JNU. An anti-Congress wave was sweeping the country and the only parties in the reckoning were the Left and the socialists. By then, the communists had already found favour at JNU. So in 1977, when Yechury stood for the Student Union elections with the slogan ‘Achcha naam, achcha kaam, Sitaram Sitaram’, he won easily and became president of JNUSU.

Since then, there has been no looking back for the Left. “The faculty has always supported the activities of student unions,” says Sanjay Ganjoo, former organising secretary of ABVP in JNU. “This is not the first time the university has been caught in the fire of anti-national activities,” he says, referring to a prickly incident in April 2010 when some students were accused of celebrating the killing of 76 CRPF personnel by Naxals in Dantewada. “They shouted slogans like ‘India murdabad, Maovad zindabad’,” claims Sandeep Mahapatra, an RSS ideologue and the only one to become president of JNUSU on an ABVP ticket. “How can this be allowed in a Central university?” The ABVP has been raising these issues for a while, he says, but the Government never paid heed. “So much goes on in the campus that should but doesn’t reach the ears of the police. It is as if JNU is run by its own Khap panchayats,” Mahapatra says.

Ganjoo recalls another incident from JNU’s chequered political past. On 1 May 2000, a year after the Kargil War, the SFI organised an India-Pakistan mushaira at the open-air theatre near KC Market. During the course of the programme, a Pakistani poet’s recital revealed anti- India sentiments and this was met with anger and opposition from two Indian Army men present in the crowd. Later, the officers were allegedly beaten up by SFI students and had to be taken to hospital, where they were kept under intensive care. When the matter was raised in the Lok Sabha by BJP leaders Rajiv Pratap Rudy and Sahib Singh Verma, the then Defence Minister George Fernandes paid a visit to the hospital, but no action was taken against the students involved in the attack.

Of late, however, the Left’s grasp on JNU appears to be loosening. Its last bastion has been raided by right-wing unions, which started gaining ground in 2000 with Sandeep Mahapatra’s victory in the students’ union elections. In 2002, the ABVP invited Vishva Hindu Parishad leader Ashok Singhal for a ‘Guru Dakshina’ event, resisting vehement opposition from Leftist students and teachers. In 2002, the Special Centre for Sanskrit Studies was set up at JNU by the then HRD Minister Murli Manohar Joshi. Experts say the Centre has paved the way for the rise of anti-Left groups in the university. “Before the Centre came, being right-wing on campus was like being Jewish in Hitler’s Germany,” says Ganjoo. Professor Ramnath Jha and other professors of the Sanskrit Centre are opposing the strike called by the JNU Teachers’ Association. “Even today, we face hostility, but at least our opinions are being heard,” says Jha.

The adoption of new OBC reservation policies in admissions since 2007-08 has led to a new group of students coming to the university. They are urban and aspirational, disinclined to chase unreal ideals. Besides, new outfits like ‘Youth for Equality’ and Dalit students’ forums have cut into the Left’s overarching narrative. “I don’t belong to any of these groups and don’t support them,” says Alok. “Between the Left, the Right and the centre, politics has become more divisive than the caste system,” he says.

Many argue that academics at JNU has fallen between these cracks. Zoya Hasan, professor emeritus, JNU, disagrees. “Our students have proved their excellence in social sciences through several research papers. They are spread across the world and are widely recognised,” says Professor Hasan. “JNU fosters a critical spirit. It is not conformist and that should be the character of any national university.” Several national leaders such as Commerce and Industry Minister Nirmala Sitharaman are alumni of this university. Foreign Secretary S Jaishankar, too, studied at JNU, securing a PhD in nuclear diplomacy.

Ramnath Jha says the sciences and other less known departments have delivered more in the way of academic excellence. Till 2006, the university had 15 patents under its name in the area of biotechnology. It has effected several technology transfers, including the technology for a recombinant vaccine against Anthrax.

There is a difference of opinion when it comes to the question of JNU’s declining aura. “JNU has been a progressive university, a special seat of learning, right from its inception,” says CPM General Secretary and former student Sitaram Yechury. “This seems to be a sinister design of the BJP and the RSS to tarnish JNU. They are trying to use an isolated incident as a useful device to cover up the economic failures of their Government.” Hasan argues that the way the teachers and the students have come together in a moment of crisis has changed the perception of the university. “JNU represents the pluralistic society of the country and not the idea of India being presented by the RSS and the BJP,” she says.

No one on campus is foolish enough to support the anti-India slogans raised by the Democratic Students Union on 9 February. “We all condemn it,” says Professor Vivek Kumar. “But rather than look for the real culprits, the Government arrested students who were not responsible. Now it is being said that all of JNU is anti-national. It is not correct.” Opinions are divided, arguments fly about and the university is at a standstill. Bishnu Mahapatra, who taught at the university from 1994 to 2005 and was a student from 1981 to 1984, said five years ago that the spirit of JNU has diminished. “All institutions need to move with the times and meet new challenges. JNU is at the crossroads,” he said. His statement couldn’t be more relevant today.