Jagdish Bhagwati: Noble if not Nobel

Seven reasons why this economist did not win the Prize 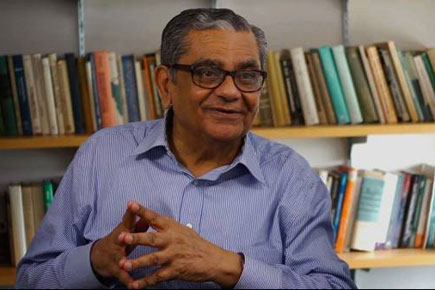 Seven reasons why this economist did not win the Prize


Strictly speaking, there is no Nobel Prize in Economics. There is a Bank of Sweden prize in memory of Alfred Nobel. That apart, I don’t think there should ever have been a Nobel Prize in Economics. Friedrich Hayek (1974 winner) thought the same, and this was the reason he stated in his Banquet Speech: “The Nobel Prize confers on an individual an authority which in economics no man ought to possess… This does not matter in the natural sciences. Here the influence exercised by an individual is chiefly an influence on his fellow experts; and they will soon cut him down to size if he exceeds his competence. But the influence of the economist that mainly matters is an influence over laymen: politicians, journalists, civil servants and the public generally.”

But I have another reason too. Unlike natural sciences, economics has no pathbreaking discoveries/innovations. It is mostly a matter of incrementally chugging along. With rare exceptions like Paul Samuelson (1970), Friedrich Hayek (1974) and Milton Friedman (1976), there are few who are head and shoulders above others. Despite the Prize being extended to non-economists Herbert Simon (1978), John Nash (1994) and Daniel Kahneman (2002), we’ll run out of exceptional people to award.

As with any prize, there are lists of those who should have got it, but haven’t. My list includes Joan Robinson and Frank Hahn. There are also lists of those who shouldn’t have got it, but did. My list includes Gunnar Myrdal (1974). The Committee for the Economics Sciences Prize has a geographical bias in composition, though it does do something like a global search before forwarding names to the Royal Swedish Academy of Sciences. Leonid Hurwicz was 90 when he won the prize in 2007.

Jagdish Bhagwati, born in 1934, is 79. He might still win the Prize, hypothetically. His contributions to international trade theory are phenomenal. This theory is no different from that of resource allocation, except that government interventions cause distortions. Bhagwati’s contributions to international trade practice have been no less phenomenal: such as arguing for free trade, arguing against protectionism, advising the GATT/WTO/UN. Nor should one forget his 1970 India: Planning for Industrialization, co-authored with Padma Desai, and similar work with TN Srinivasan. It isn’t just recent stuff that is being produced with Arvind Panagariya (there is more than one book). Much earlier, when liberalisation wasn’t the in thing, Bhagwati was one of India’s few contrarian voices. He didn’t side with the system and didn’t reap the benefits. He got the Padma Vibhushan only in 2000.

Does Jagdish Bhagwati deserve the Nobel Prize? He certainly does. Lesser mortals have got it. Will he get it? Despite what I have said about age, I doubt it. Since the Prize started in 1969, 71 individuals have won it (prizes have been shared); 85 per cent have been US citizens (including the naturalised). There have only been five from outside the US and Western Europe: Arthur Lewis (1979), Robert Aumann (2005), Leonid Kantorovich (1975), Amartya Sen (1998) and Christopher Pissarides (2010), with Arthur Lewis and Amartya Sen being the only ones not of European descent. Elinor Ostrom (2009) has been the only lady. No matter how much statistical control is done, some suggestion of geographical and gender bias is inescapable. Paul Krugman won for international trade, drawing on earlier work that Bhagwati had done, in 2008. That’s when Bhagwati should have been a co-winner. I suspect that window is gone. Bhagwati has won a fictional Nobel in a 2010 episode of The Simpsons. I fear it will remain that way.

There are reasons, none very convincing. First, Bhagwati is brusque, sharp with wit and repartee, not caring much for pleasantness and relationships. Second, prizes are not invariably won on merit. Like any other award, there is lobbying. This doesn’t matter for sureshot ones like Samuelson, Hayek or Friedman. But it does matter for those at the margins. I am not sure how successful Bhagwati has been at this, assuming he was so inclined. Third, a refinement of this, there is cultivation of the Committee itself, perhaps even efforts to influence its composition. Fourth, international trade is seen as somewhat esoteric and abstract. It doesn’t affect people’s lives the way a famine does. Fifth, belief in markets makes it a little harder to earn Nobel Prizes, though there have been exceptions. Sixth, flowing from that, while you do not have to be a bleeding heart, being one makes it easier. Seventh, and this is the bottomline, if you want the Nobel Prize, you need to figure out a strategy and work towards it. I am not sure Bhagwati has had a strategy. Even if he has had one, it hasn’t been particularly successful. But one can think of winners who have clearly followed a strategy, evident in their professional and personal dealings.

While I am sad that Bhagwati hasn’t got the Prize, and probably never will, there is a silver lining to this in the context of what Hayek said: Bhagwati hasn’t developed pretensions to being omnipresent and omniscient.