It’s a City of Undeserved Privilege

Like a rich man’s son, Delhi is a beneficiary of undeserved privileges. That is at the heart of Bombay’s contempt for Delhi. 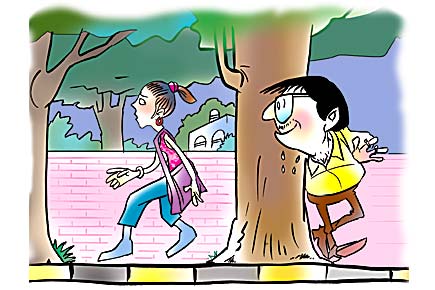 Like a rich man’s son, Delhi is a beneficiary of undeserved privileges. That is at the heart of Bombay’s contempt for Delhi.


Like a rich man’s son, Delhi is a beneficiary of undeserved privileges. That is at the heart of Bombay’s contempt for Delhi.

He is a large amiable boy who smiles at breasts as if they are acquaintances. He suspects he is good looking, and he probably is, especially when he is quiet. A pretty white girl walks into this London pub and he nudges the elbow of a friend. As his eyes follow her to the far corner, his face assumes a sudden seriousness. He then takes her pictures with his phone camera. He tries to meet the eyes of any woman in the pub so that he can flash a smile. He has heard that white women are broadminded. “I like to hear white women scream under me,” he says. A Bengali sitting beside him says he must become a midwife then. Everybody laughs. He stares at the Bengali who is a much smaller man, and he slaps him a few times. Others now rise and try to drag him away. He growls, not metaphorically but really growls. And he says, “I’m a baaad guy, I’m a baaad guy.” He is, of course, a jat from Delhi whose matrimonial ad had once said, accurately, that he is from a good family. He has travelled the world. He studied briefly in the First World, even. There are thousands like him in Delhi, the natural habitat of a kind.

Delhi is a vast medieval town of indisputable botanical beauty, spectacular red ruins, Sheila Dixit, and other charms. Its women, rumoured to be high maintenance as if there is another kind, take so much care of themselves that one would think the men are worth it (but they make a gesture that suggests puking when asked to confirm). Space is not compressed here. Everything is far from everything else. There are real gardens where you do not see the exit when you stand at the entrance. It has sudden small parks that in Bombay would have been called, ‘Chhatrapati Shivaji Mini Forest’. Homes have corridors, and they are called corridors, not half-bedrooms. Yet, Delhi has a bestial smallness of purpose.

Those men there who drive the long phallic cars, sometimes holding a beer bottle in one hand, there is something uncontrollable about them. Even for a man, it is hard to understand their mutation. What is the swagger about? What is the great pride in driving your father’s BMW, what is the glory in being a sperm? And what is the great achievement in stepping on the accelerator? It is merely automobile engineering—press harder on the pedal and the car will move faster. Why do you think a girl will mate with you for that? It is somehow natural that the contemporary version of Devdas, Anurag Kashyap’s Dev D, would be set in Delhi, where a man can debase himself because life does not challenge him, he has no purpose, whose happiness is a type of sorrow. This motiveless Delhi male, you can argue, can be found in Bombay too, where not all BMWs are hard earned. But that’s not very different from saying Bombay, too, has bungalows.

Like a rich man’s son, Delhi is a beneficiary of undeserved privileges. That is at the heart of Bombay’s contempt for Delhi. Bombay is a natural city, like all great port cities of the world. It was not created. It had to arrive at a particular moment in time, it was an inevitability caused by geography, shipping and shallow waters. Bombay eventually earned its right to be a financial force through the power of enterprise, which created a system that allowed, to some extent, anyone to stake a claim at wealth through hard work. That culture still exists. It is the very basis of Bombay. That is the whole point of Bombay.

But Delhi as a centre of power is an inheritance, a historical habit. An unbearable consequence of this is the proximity of easy funds for various alleged intellectual pursuits which has enabled it to appropriate the status of intellectual centre. It is a scholarship city, a city of think tanks, of men who deal in discourse, debates and policies. And of fake serious women who wear the sari the other way and become leftists, nature lovers and diurnal feminists.

Delhi, often, confuses seriousness with intelligence and humour with flippancy. People will not be taken seriously here if they are not, well, serious. There is much weight attached to the imagined sophistication of talk, of gas. It is a city of talkers. There is always The Discussion. When you are in Delhi, you have to talk, and then they talk, and they appear to be solving an enigma, they seem headed towards achieving some revelation. But then, you realise, they were peeling an onion, an act that leads to more peels and at the heart of it all, there is nothing. Delhi is an onion. It is a void-delivery device.

Of course, all this is a generalisation, but then generalisation is a form of truth. One of the most repulsive images I bear in mind of Delhi is a scene in JNU, when Venezuelan president Hugo Chavez delivered a special lecture. It was like a rock concert and Chavez, who is a scion of the same imbecilic philosophy that once destroyed the great economies of South America, was the star. As students pumped their hands in the air and cheered him for his anti-capitalist calling, I looked at their faces. I knew those faces. They were from homes that once profited from India’s socialist corruption, and then from Manmohan’s revolution. They were hip. They would, of course, later join MNCs and chuckle at their youthful romanticism. That moment in JNU was despicable because it captured a meaningless aspect of Delhi’s fiery intellectuality, and also laid bare the crucial difference between intellectuality, which is borrowed conviction, and intelligence, which is creativity, innovation and original analysis.

It is for the same reason that the greatest misfortune of Indian journalism is that it is headquartered in Delhi. Needless to say, like in any other city, Delhi has astonishingly talented editors, journalists and writers, but there is a Delhi mental condition which is incurable—a fake intensity, a fraudulent concern for ‘issues’, the grand stand. Readers, on the other hand, have many interests today apart from democracy, policies and the perpetual misery of the poor. But the Indian media, based in Delhi, refused to see it until recently and very grudgingly, when The Times of India proved it. It is not a coincidence that The Times Group, the most profitable media organisation in India, is based in Bombay. It is not a coincidence that the game changer came from here. In Bombay it is hard to convert air from either side of your alimentary canal into cash. You have to do something here. You have to work. It is appropriate that the National School of Drama, with its phoney distaste for money, is in Delhi. And commercial cinema is in Bombay.

It must be said though that in recent times Delhi has become somewhat more endearing. This is partly because of Bombay’s own degradation and its loss of modernity, and partly because of a remarkable cultural irony. Bombay’s films were increasingly becoming pointless because, like Delhi has those silver sperms in BMWs, Bombay’s film industry, too, suffers the curse of the privileged lads whose fathers were something. As actors with no real talent they could still survive, but some who did not look so good could do nothing more than remaking movies about love and parental objection. Then two things happened. The flops of the brainless boys from the film families gave opportunities to talent that had arrived from all over the country, including what is called North India. They were waiting, and when they got a chance they created a new kind of commercial cinema in which Bombay was not necessarily the focus. That resulted in the startling revelation here that Bombay is a culturally impoverished, rootless setting compared to Delhi. What films like Oye Lucky! Lucky Oye! and Dev D have achieved as hilarious, poignant and self deprecatory narrations of the North Indian way of life, has changed Hindi cinema, probably forever. So Delhi is being seen a bit differently in Bombay, with some affection too. Though, the best thing about Delhi will always be its winter. When there is this mist. And you do not see its people.