It Was a Faith Accompli

Varanasi for Modi was chosen nine months ago. The inside story of how the House of Saffron took its boldest decision. 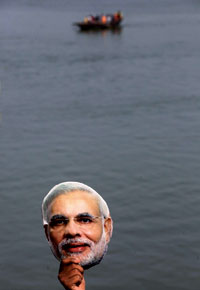 Varanasi for Modi was chosen nine months ago. The inside story of how the House of Saffron took its boldest decision.

On 15 March 2013, top RSS leaders gathered at Jaipur for a Pratinidhi Sabha meeting of the Sangh. It was exactly one year before the BJP’s election committee met at its Ashoka Road headquarters in New Delhi to formally decide on Narendra Modi’s candidacy from Varanasi, plumb in the thick of Uttar Pradesh’s Poorvanchal region. Apart from chalking out the Sangh’s plans for the months ahead, RSS bosses had another important agenda to transact: how to get the BJP battle-fit to cash in on the meltdown of the Congress and the alliance led by it at the Centre in the upcoming general election.

Across the country, there were already clear signs of voting habits, beliefs and emotions moving away from the ruling party. The in-your-face corruption of the central Government had driven a firm wedge between the Congress and the UPA. But the BJP, torn by an intense, bitter inner-party struggle, was finding it hard to find a winning USP and a charismatic messenger to deliver that proposition. The cadre was demoralised despite an impressive third term for Narendra Modi in Gujarat. Even from among those friendly with the BJP, there were loud calls for a big shake-up, and for sharper minds to lead the party.

The RSS bosses gathered at Jaipur were unanimous in their view that the drift within the BJP would ensure another term for it in the opposition. This much was clear: the old and the elderly had to be pensioned off, the new had to urgently be empowered. The Sangh leaders were unambiguous: Modi, of the indefatigable and galvanising energy, was the man with the political heft to take the party to victory. He, they concluded, should contest a Lok Sabha seat from a Hindi heartland state—that too, the most imposing—to generate a cascade of electoral support across the entire region.

RSS Sarsanghchalak Mohan Bhagwat wasted no time in directing his deputy Bhayyaji Joshi and Suresh Soni to convey the wishes of the fountainhead organisation to the party. The RSS’s proactive role in easing Modi’s elevation to the BJP’s top was interesting, especially since the Gujarat Chief Minister did not share a warm relationship with the high command in Nagpur. He had steadfastly refused, for example, to fall into the soporific rhythm of ingress and egress from Nagpur—or even the RSS camp office in Delhi’s Jhandewalan—as BJP aspirants are wont to.

Months ago, before re-installing Rajnath Singh as BJP president, the upper echelons of the RSS had considered three names for the post, including Modi and Goa Chief Minister Manohar Parikkar. The Goa leader was seen as too junior. Modi, on the other hand, showed little interest in singing a duet with the RSS. This left the path clear for Rajnath Singh to the key post.

Many in the RSS were not fully happy with Modi’s manner of functioning in Gujarat, given how little heed he paid to the Sangh’s directions. But it refused to let these misgivings get in the way of a decision considered best for the BJP to regain power at the Centre.

Almost immediately, Bhaiyyaji Joshi and Suresh Soni of the Sangh held several rounds of talks with BJP leaders. Although the BJP made Modi its presumptive candidate for the top post at the party’s Goa conclave—he was designated its chief campaigner—senior party leaders kept placing hurdles in his way. These had to be eliminated without ado.

Meanwhile, Modi’s trusted aide Amit Shah, armed with the RSS’s charge, had already begun the groundwork for identifying a seat in the Hindi heartland for the BJP’s prime ministerial candidate. He began the exercise in early June 2013, and concluded by month-end that Modi contesting a UP seat would deliver substantial dividends to the party. Varanasi was seen as the best battleground, as it would influence voter behaviour across Kashi Kshetra and the adjoining areas of Bihar. Once Varanasi was endorsed by the RSS leadership, its workers and leaders were asked to reinforce this decision on the ground. RSS leader Krishna Gopal was put in charge of creating the requisite backup for Modi in Uttar Pradesh.

The next big task was to formalise Modi’s candidacy for prime ministership. Veteran party leader LK Advani, who was in constant touch with former BJP president and RSS favourite Nitin Gadkari, was under the impression that there was a division on the choice of Modi for Prime Minister. Advani made his reservations known to leaders of the Sangh and BJP on several occasions. He told them that a formal decision should be put on hold until after a round of Assembly elections later in the year.

Under the impression that his views would prevail within the BJP Parliamentary Board meeting on 13 September, Advani prepared to leave for the party’s Ashoka Road headquarters from his Prithviraj Road residence around 3 pm. Just then, he received a call; Rajnath Singh and Arun Jaitley had directed Gadkari to call Advani before the meeting and inform him that a decision on Modi could not be delayed any longer. The penny had fallen for Advani.

In the meantime, his protege Sushma Swaraj had taken her own objections to the Parliamentary Board, only to be checkmated decisively by Arun Jaitley, Venkaiah Naidu and Thawarchand Gehlot, all of whom maintained that the choice of Modi was propelled by sentiments in his favour among party cadre as well as the public at large.

“All of Advaniji’s closest aides appear to have deserted him,” remarked a member of the panel to Advani—in jest—after the 13 September meeting.

At the subsequent press briefing, Swaraj sat next to Modi in an apparent show of solidarity. The party paraded every Board member in a decisive show of support for Modi—and a clear indication of the marginalisation of Advani and his ilk. Swaraj left the meeting soon after. What followed was orchestratedly final. Rajnath Singh said that BJP support for Modi was ‘unanimous’; and the prime ministerial nominee himself announced that he would seek Advani’s blessings.

As if by clockwork design, Madhya Pradesh Chief Minister Shivraj Chauhan came out in full support of Modi’s claim to the Prime Minister’s post. His Chhattisgarh counterpart Raman Singh also endorsed Modi resoundingly through tweets soon after. A long and bitter power struggle had ended.

On 27 February, the BJP began the process of announcing its candidates for the Lok Sabha election. That day, only non-contentious seats and those in states where the party has little presence were to be taken up, but the question of a seat for Modi hung heavily in the air. Privately, BJP leaders let it be known that the leader would contest two seats: Vadodara and Varanasi.

But the sitting MP from Varanasi and former party president Murli Manohar Joshi, who’d been informed of the decision by Bhaiyyaji Joshi weeks earlier, played the drama queen, claiming that the party had yet to clarify the matter to him personally. BJP leaders went through the motions of placating him. When he persisted, Amit Shah drove down to his Raisina Road residence on the evening of 13 March. Shah told Joshi in no uncertain terms that he would have to contest from Kanpur. Discovering that he had little option but to comply, Joshi effected a calibrated climbdown from his staunch only- me-for-Varanasi stand.

On 15 March, party leaders at the Ashoka Road headquarters took up another list of probables—this time, for 53 Uttar Pradesh seats. The Varanasi column had just one name against it: Modi. It was the other candidate choices that the panel had to debate that day. At the end of that long session, though, there was only one piece of eyeball-grabbing news in the country: Narendra Damodardas Modi would seek election to Parliament from Uttar Pradesh’s holiest city. A barrage of objections, questions and anti-Modi voices had been silenced. The message was clear. And cacophony had made way for a harmonious monotone: the Sangh Parivar had embraced Modi as one.