Is AAP withering away?

As the elections bring the Aam Aadmi Party’s internal squabbles to the fore, Arvind Kejriwal faces his biggest challenge yet 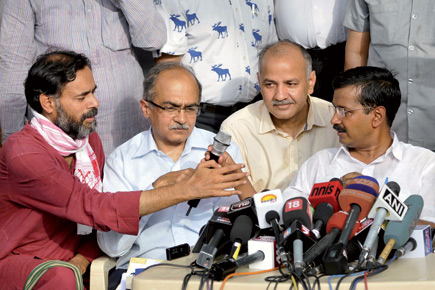 As the elections bring the Aam Aadmi Party’s internal squabbles to the fore, Arvind Kejriwal faces his biggest challenge yet

Kejriwal knows he isn’t being Kejriwal if he isn’t protesting. With Delhi reeling under long power cuts, he has seized the opportunity to tap the people’s ire by shooting off a letter to the Prime Minister to intervene, as north India sizzles through an intense heat wave. Aam Aadmi Party (AAP) leaders staged protests outside Union Health Minister Harsh Vardhan’s home this week. The revolutionary was back in business.

Yet, despite all his familiar attitudinizing, Kejriwal’s disarming smile has faded these days, following his resounding defeat and the raft of internecine wrangling plaguing his party. For a fledgling party that found the national limelight with a stunning poll triumph in the Delhi Legislative Assembly elections just last December, troubles seem to have surfaced too early. And political pundits aver that the cosmetic patch-ups engineered at a recent high-level meet could amount to little more than hiding dirt by brushing it under the rug.

This Monday, a day after the three-day National Executive meeting of AAP that ended on 8 June, the Tilak Lane residence of Kejriwal wore a deserted look. At the far end of the driveway, Kejriwal’s core team (which once included Ashutosh and Ashish Khaitan), is working from a garage; micro-managing, stocktaking, settling bills. They put up a brave face, cracking jokes, some of them ambiguous. But even fixing the water cooler placed at the entrance seems daunting. What is missing at the former Chief Minister of Delhi’s residence are the groups of petitioners who used to look up to Kejriwal as a man with a magic wand, who could perform miracles. No more volunteers and supporters queuing up.

The party’s high-level summit had just discussed the poll debacle, the blame game and the public spat between senior leaders Yogendra Yadav and Naveen Jaihind before rejecting their resignations. However, party leaders indicate that the cracks could get deeper, implying further trouble for the one-and-a-half- year-old party, seen as an alternative to the Congress and the BJP until they lost the elections less than a month ago. The worst crisis that has enveloped the party since its inception only mirrors the big fall it has suffered in popular perception.

Kejriwal—media savvy and until recently active on social networking sites—is no longer interested in engaging with reporters, and has preferred to stay indoors. For, he believes his first and foremost task is to help AAP survive this defeat. The reality check has shaken him and the party. The only solace is that they are not the only political outfit swept away by the Modi landslide.

At the national executive meeting, Kejriwal made it a point to hear each member out. Then, he admitted that he too has “made mistakes”. In a bid to reach out to dissidents and keep the party cohesive, he vowed to kickstart the process of restructuring the party from the lowest strata to the national level. The proposed exercise has been named Mission Vistar, under which all existing committees of the party will be refurbished by nominating new members.

At the meet, Kejriwal was particularly attentive to Yogendra Yadav, AAP’s most eloquent ideologue, who was recently caught in the eye of the storm over an acrimonious exchange of mails with Manish Sisodia, a senior AAP leader. In fact, Yadav deserved much credit for articulating the party’s position. His training as a psephologist (a political scientist dealing with the elections) meant his team had forecasted that AAP would do very well in the assembly elections last year. Nearly two months before polls, a similar survey carried out in Haryana showed rising support for AAP. The survey said the party would secure 23 per cent of the votes polled, but Kejriwal, leading the effort in Haryana, finished fourth with barely 50,000 votes in Gurgaon; he had even lost his security deposit.

AAP’s huge setback hasn’t come as a surprise for other analysts. Diplomat Pavan Varma, in his latest book The Great Indian Middle Class, calls the AAP a notable entry into the political arena. But he contends that the avowed goals of AAP are too ‘radical in the template of politics and governance’, calling for it to ‘interrogate its tactical tools and question its policy decisions wherever necessary’. Varma argues that though the party has the widespread support of the middle class, it is still a fledgling force; it needs to work much harder to gain in ideological coherence and organisational strength.

“AAP is a collective blunder based on SMS politics, individual efforts restricted to small activist zones,” concurs Nirmalangshu Mukherji, a professor of philosophy at Delhi University, who believes the party’s only chance lies in forming an alliance with ‘real’ parties that have mass support. “The entire concept of the AAP is proving to be urban, elitist and essentially anti-people, though I won’t say it is fascist. If their elitist spectacles make them blind to the traditional Left, they can at least watch the RSS for lessons, when the corporate media loses interest. In fact, even Trinamool Congress will do.’

Of course, most pundits are bearish on the AAP, which was touted a few months ago as the new Left. Despite all claims of burying differences, the blame game has begun to show signs of taking its toll on the party. After all, Kejriwal himself has come under criticism for his dictatorial style of functioning from none other than Yadav, who in a veiled email attack on the AAP chief (addressed to all senior party leaders) referred to the need for a distinction between the leader and the supremo.

Soon, an email from Manish Sisodia that replied by hitting out at Yadav was leaked to the media, to stress the other side of the story. ‘Over the last 15 days, an ugly spat has developed between you and Naveen Jaihind. The unfortunate part is that the two of you have been fighting your personal battles in public and through media forums,’ Sisodia wrote, going on to highlight Yadav’s earlier demand that he be declared AAP’s chief ministerial candidate for Haryana. Sisodia also revealed that Kejriwal had been dead-set against AAP contesting elections across the country; he had wanted the party to concentrate on Delhi. It was Yadav who had insisted on contesting the General Elections.

Unsurprisingly, the AAP ended up spreading itself too thin by contesting 443 Lok Sabha seats. In Karnataka, AAP secured only as many votes as the newly introduced voting option, None of the Above (NOTA). But Yadav has been constantly defending the party’s all-India ambitions. To be fair to Yadav, this gave the AAP the only success it has had, in Punjab. In any case, the idea was to let more and more people know of its existence as an alternative across the country. This may, perhaps, help it in the years ahead. But Yadav’s future in the party is still, at best, uncertain.

There were discordant voices at the national executive meeting. Questions were raised regarding who had leaked the mails to the media. Of course, the suspicion rests on those who wrote them. However, Kejriwal focused on resolving contradictions and differences by proposing that theAAP get estranged leaders such as Shazia Ilmi, among others, back into the fold.

What lessons will Kejriwal learn from this humbling experience? Will he be more of a leader and less of a supremo? A close aide of Kejriwal says, “We must not forget that he is human. Some leaders in the party tend to forget this simple fact. After a national executive meeting which lasted for a day, most of the members wanted to call on Kejriwal in person, one-on-one. All such requests are not humanly possible to entertain. When he declined to meet some, they left enraged and soon held a press conference, announcing that he is a dictator.”

If Kejriwal can surpass his grandstanding, his actions could make or break the AAP—and the hopes of lakhs of middle class Indians who looked up to him as the gamechanger.