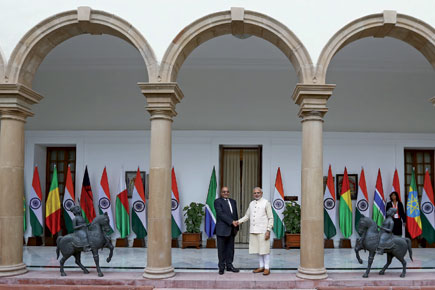 India hosted the third India-Africa Summit this week, an initiative which started in 2008. The first India-African summit was held in New Delhi in 2008 followed by the second summit in Addis Ababa in 2011. These previous two summits, with participation from 15 states, were modest by comparison and the results were underwhelming to say the least. It has been a failure of Indian diplomacy that a continent with which India has enjoyed substantive ties ever since independence now no longer views India as a priority nation and often complains of indifference on the part of New Delhi.

The summit this week was more ambitious. True to Prime Minister Narendra Modi’s style, everything about the event was grand. More than 1,000 delegates from all 54 African countries attended the summit, with more than 40 countries represented at the level of President, Vice President, Prime Minister and King. This was the largest ever gathering of African nations in India with even some controversial figures like the Sudanese President Omar al-Bashir and Egyptian President Abdel Fattah el-Sisi also making their presence felt. The Modi Government even ordered the Prime Minister’s signature sleeveless jackets for African leaders to be worn at a dinner hosted by Modi.

With this mega event, New Delhi has signalled its readiness to step up its engagement with Africa, a relationship which is centuries old, bolstered by trade across the Indian Ocean and a million-strong diaspora across Africa. Shared colonial legacy and post-independence development experience have framed India’s relationship with Africa. India’s role as a champion of anti-colonialism and anti-racism after its independence in 1947 drew it closer to the African nations. India emerged as one of the most vocal critics of apartheid in South Africa.

Despite being on the peripheries of global politics during the Cold War, India became one of the strongest proponents of the independence of African states from colonial subjugation and a supporter of South-South cooperation in order to challenge the inequities of global political and economic order. But India’s substantive presence in Africa was marginal as it remained focused on its own periphery through much of the Cold War period and its capabilities were limited. Since the end of the Cold War and propelled by China’s growing profile in Africa, India is re-invigorating its ties with the African continent. The cooperation framework agreed at past India-Africa summits and the Indian initiatives to scale up investment and aid to Africa have underscored India’s aim to foster a robust partnership between New Delhi and the African continent.

India today has growing stakes in Africa. With some of the fastest growing nations in the world, Africa of today is not the ‘dark continent’ of yore. The needs of regional states are divergent and their strengths are varied. India’s focus over the last few decades has largely been on capacity building on the continent, providing more than $1 billion in technical assistance and training to personnel under the Indian Technical and Economic Cooperation (ITEC) program. India has committed $7.5 billion to African infrastructure, covering 137 projects in more than 40 countries. India has also offered duty-free market access to Africa’s least developed countries. But India’s trade with Africa at $70 billion remains far below potential.

India wants a ‘developmental partnership’ with Africa to be the cornerstone of its economic ties with the region. This also allows India to differentiate itself from the principles on which countries belonging to the Organization for Economic Cooperation and Development (OECD), the traditional donors of foreign aid, have based their relations with the recipient nations. While the Indian private sector, including big names like Tata, Bajaj, Mahindra and Airtel, has made significant investments in Africa, it needs to be bolder and more imaginative in seizing the initiative on the continent.

Economic engagement with Africa has become central to India’s new approach. This is related to India’s search for energy security in which Africa is playing an increasingly important role as India looks to diversify its oil supplies away from the Middle East. Africa accounts for about 17 per cent of India’s oil imports which are likely to grow in the future.

India’s partnership with Africa in recent years has focused on human resources and institutional capacity building. It is building economic and commercial ties with Africa even as it is contributing to the development of African countries through cooperation and technical assistance. It is the third-largest contributor of UN peacekeepers to the continent. The Indian Navy is also engaged in dealing with pirates off the coast of Somalia. It has been patrolling the waters of the Indian Ocean and helping countries in Eastern and Southern Africa in tackling piracy and surveillance of the EEZ. India has sought cooperation of African states in the Indian Ocean littoral to establish mechanisms for cooperation in order to deal with threats to regional security including terrorism and piracy.

There are other strategic convergences between India and various major African states. From Boko Haram in Nigeria to the growing footprint of the Islamic State, terrorism and Islamist extremism is threatening Africa like never before. India and African states can jointly address this common challenge. India is already working with the littoral states in the Indian Ocean region to ensure the security of the sea lanes of communication there. The Modi Government is also seriously investing in India’s bid to become a permanent member of the UN Security Council and Africa’s 54 states will be key in supporting that endeavour.

Though India has committed considerable resources to Africa, actual delivery on the ground and implementation of projects has been far from satisfactory. Contrary to China, India has refrained from viewing Africa through mercantilist eyes. Yet many in India feel that India has got a short shrift when it comes to New Delhi’s core concerns. A case in point was New Delhi’s failure to secure backing of African nations for India’s permanent membership in the UN Security Council in 2006. China nudged the African Union into taking a position that demanded not only a permanent representation in the Security Council but also veto power. This led to the collapse of the nascent attempts to expand the Security Council.

Beijing’s policy of using financial and military aid to secure oilfields in Africa has resulted in New Delhi losing out. The fierce competition between China and India for resources and energy to fuel their economies has been likened to the so-called scramble for Africa among European countries in the 19th century. This is a competition only in name as India lags far behind China in Africa. Where China’s response toward the region has been well-coordinated across various government agencies, India has failed to project a united front. The Indian government will have to support its companies more proactively if it hopes to close the gap with China in terms of its economic profile on the continent.

Yet India has its own strengths in its dealings with Africa. Its democratic traditions make it a much more comfortable partner for the West compared to China in cooperating on Africa- related issues. India is viewed as a more productive partner by many in Africa because Indian companies are much better integrated into the African society and encourage technology transfers to its African partners. New Delhi will have to leverage its own strengths in making a lasting compact with Africa and regain its lost presence on the continent.

Today all major powers including the United States, China, Japan, and the European states are wooing Africa with investments and trade linkages at a time when Africa is beginning to engage the world on its own terms. India will have to ensure that it remains relevant to Africa’s rapidly changing needs. A mega India-Africa Summit will be worth the investment if the follow- up is as meticulous as the planning for the summit itself.

(Harsh V Pant is a professor of International Relations at the Department of Defence Studies, King’s College London)