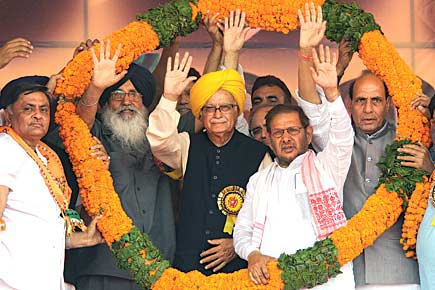 
A Very SAD State of Affairs for the BJP

It may be one of the oldest allies of the Bharatiya Janata Party (BJP), but the Shiromani Akali Dal (SAD) somehow continues to find new ways to embarrass the former. This time it is not about Punjab, where the two are partners in the government, but about neighbouring Haryana. For the first time, the SAD has fielded its own candidates for two Assembly seats: while Charanjit Singh is the party’s candidate from Kalanwali in Sirsa, Charanjit Kaur is contesting from Ambala city in the October 13 state Assembly election.

The embarrassment for the BJP doesn’t just end there. The SAD has declared that it is supporting the Indian National Lok Dal (INLD), which after parting ways with the BJP is no longer a part of the National Democratic Alliance (NDA).

While both SAD and BJP leaders insist that the SAD’s move does not hamper the alliance, BJP cadres are obviously not too happy with this development. The SAD insists that the arrangement has been made keeping in mind the aspirations of the party’s Haryana unit. The SAD top brass is now actively campaigning for the INLD and in effect, against the BJP. In fact, at the INLD’s biggest rally organised in Jind last week, SAD chief and Punjab Chief Minister Parkash Singh Badal was one of the main speakers. And in spite of Badal’s presence, old friend and ally INLD chief Om Prakash Chautala chose to speak against LK Advani and dub the BJP, “the Congress’s B-team.”

“We are not the SAD’s allies in Haryana but in Punjab,” is how BJP spokesperson and MP Prakash Jawadekar chooses to brush aside the problem. But, for the Punjab unit of the party this cold logic just doesn’t work. There are murmurs within the unit that this is another one of the SAD’s attempts to humiliate the BJP while the central leadership looks on. In Punjab, the BJP, which bagged 19 of the 23 Assembly seats it contested, is part of the government. But, both the Chief Minister and the Deputy Chief Minister come from the SAD which has 51 MLAs in the 117-member House.

Meanwhile, in Jind, the BJP’s candidate for the seat has quit the electoral contest accusing his party of not being “serious” about the polls.

Killing their Own Cause

The worst fears of the Jharkhand police came true at about 9.15 am on 6 October. A week after he was kidnapped by Maoists, police inspector Francis Induwar’s decapitated body was found on the outskirts of the state capital, Ranchi. The Maoists had been demanding the release of three of their men in exchange for Induwar. But after the police upped its efforts to track down Induwar, they decided to kill him.

Maoists have killed many policemen in the past too, but this particular one will not go down well even among people who have been sympathising with the Naxal cause. For senior Naxal leader Kobad Ghandy, in particular, the amount of sympathy he had gained among the urban masses since his arrest in Delhi recently will hit a low now.

Ghandy’s arrest had managed to trigger off a lot of debate among the urban educated elite, for whom there was till then no distinction between a terrorist killed on the border and a Naxalite leader shot in the jungles of Bastar. The fact that Ghandy belonged to an upper middle class family and had given up everything to join the Naxal movement made clear that distinction. But with Induwar’s death, that line is bound to get blurred again in the minds and hearts of educated observers.

On one television channel, for instance, images of Induwar’s body and file pictures of young Taliban militia holding a knife to a hostage’s neck were being relayed simultaneously. Ironically, this is exactly what the Centre might have wished—portray Maoists as terrorists who kill their captives in cold blood. Induwar’s brutal killing has done what a recent Home Ministry advertisement in national newspapers, which showed pictures of Naxal victims, may not have been able to achieve. This depiction, which will now ring true for most people in the wake of Induwar’s killing, will come in handy for the Government, which is planning a major offensive against Naxals. For the rebels, it will prove to be a proverbial case of shooting their own foot.

Even veteran Naxal ideologues like Kanu Sanyal have criticised the Naxal policy of targeting individuals. Sanyal has said that all Naxals should unite people to launch an ‘armed struggle’, instead of killing individuals. One clear indication of support for Naxals waning in the wake of killings of people like Induwar has been the intelligentsia in Kolkata distancing itself from Maoists.

It is time for the Naxal leadership to pay heed to the voices of dissent and stop killing individuals. On its part, the Centre might do well to practise what it preaches—stop the killing of innocent people in the name of a war on Naxalites.

Wash the Soil of Blood Stains

Change, a proverb says, always demands a heavy price from society. It would be an exaggeration to call the massacre of 17 farmers in Khagaria on 2 October a sign of any change in Bihar; it would be more accurate to describe it as a reflection of the rural tension that precedes the first sign of change.

Rural tension has indeed been building up, silently, across the state ever since a land reform commission headed by D Bandhopadhyay submitted its report to Chief Minister Nitish Kumar a year ago. The commission had been set up by Kumar in 2006 to lend credence to his promises of introducing land reforms on the lines of West Bengal. But the state government developed cold feet when the commission suggested distribution of ceiling surplus land among the landless and bestowing permanent tilling rights upon share-croppers.

While the government’s exercise turned out to be a blank shot, the mood on the ground had changed. The initial euphoria of the rural poor turned into despair, whereas the land owners, who were anxiously awaiting Kumar’s move, have got aggressive. With political support tilting heavily in their favour, the land owners, mostly upper castes and a section of OBCs, have started taking away their land from the share-croppers. The resultant tension in rural areas is threatening to take the state back to the era when land dispute-driven carnages had been occurring with sickening regularity. This is the last thing the state can withstand now.

The patronage politics of the major parties notwithstanding, the Khagaria killings have brought land reform onto the state’s political agenda. And it’s time for change.

Smoke and the City

If you feel strongly against the ban on smoking in public places, the worst place for you is Delhi. Only 12 states and one union territory, Chandigarh, have taken up the campaign with any seriousness. The ban has completed a year and in this period, Delhi fined 11,362 people—over 31 people every day. Tamil Nadu came close, fining 10,979 people. The fine is Rs 200. Tamil Nadu made more money (Rs 12.63 lakh) than Delhi (Rs 10.77 lakh) despite fining less people. The reason is institutional fines: if private institutions meant to be used as public spaces, such as restaurants, allow smoking, it is the institution that has to pay a fine for every smoker found on the premises. A restaurant can also be fined for simply having ashtrays on the table, or not writing on the wall who to address your complaint to in case the person on the next table is smoking.

Karnal Desire for A Condom

Anand Prakash Sharma is dead serious about using elections to promote safe sex, but the Election Commission isn’t being too cooperative. Sharma, an activist in Haryana, wanted to contest from, er, Karnal, with a condom as his election symbol. His campaign was to focus on issues like HIV-Aids and the rights of sex workers. Plus, there is his controversial election promise to decriminalise sex work. His logic is that prostitution satiates the sexual needs of men and thus protects the ordinary woman on the street. The Election Commission, however, wants him to choose another symbol. KF Wilfred, secretary at the Election Commission of India, says there is a set of allotted symbols and candidates have to choose from amongst those. But in future, will the EC be willing to let the safe-sex sheath be used? Wilfred laughs loudly and says, “We’ll see.”