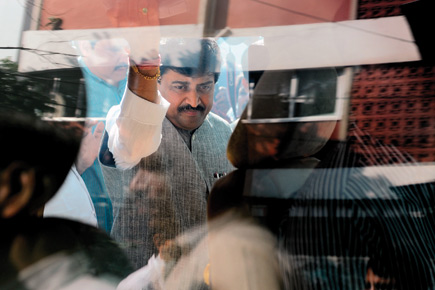 In a move aimed at saving Maharashtra’s minister of state for home, Ramesh Bagwe, the state’s Chief Minister Ashok Chavan has withdrawn all political cases in Maharashtra till 1 May 2005. Bagwe’s elevated status is said to be due to his proximity to the Congress heavyweight in Pune Suresh Kalmadi, who is close to the Gandhis.

Bagwe’s application for renewal of his passport, at the Pune Passport Office, was recently rejected because of a negative police verification report. There were 19 criminal cases pending against him. A defiant Bagwe, instead, began demanding the ejection of Pune’s Police Commissioner Dr Satyapal Singh. When the Shiv Sena-BJP led opposition and other prominent persons demanded that Bagwe be dropped from the state cabinet, the Congress worked out a formula with coalition partner NCP. Along with Bagwe, the NCP will be the biggest beneficiary of the decision as there are numerous cases pending against its workers. Bagwe has tried hard to be seen as doing the right thing within his party. He was seen carrying  Congress General Secretary Rahul Gandhi’s shoes during the leader’s visit to Mumbai in February. The state’s home minister RR Patil has stated that only those cases in which there was no damage to property or life will be withdrawn, though the cases against Bagwe are much more serious. These allegations include gambling and bootlegging. He also has two cases of kidnapping, five for possession of arms and numerous cases of assault and threatening people. Patil has categorically stated that the “other” cases have been dealt with by the police and those pending are political in nature. Following the passport refusal fracas, the Congress High Command did ask for details of cases against Bagwe. However, it is after its perusal that the decision was taken to withdraw the political cases in the state. Irrespective of the cases against him, the Chief Minister and the state home minister have given Bagwe a clean chit and emphatically said that he will be given a new passport.

Simple electoral arithmetic has forced the Congress High Command to take a lenient view of former Andhra CM YSR’s son, Jaganmohan Reddy, who has been in the thick of action this week stirring up the dormant Telangana agitation, even as Congress President Sonia Gandhi met actor-politician Chiranjeevi earlier last week to help keep the numbers. YSR’s son is throwing his weight around now because he is an important player in the Congress’ plans for securing the Rajya Sabha seats from Andhra Pradesh.

The state has six seats, and among others seeking election is Union Environment Minister Jairam Ramesh.

Jagan, who is yet to abandon the idea of succeeding his father, was keeping a low profile for several months. But he decided to test the support of pro-YSR MLAs whose numbers have dwindled from 130 to about 40.

With the pro-Telangana agitators now silent, Jagan took the opportunity to tour some Telangana areas, ostensibly to sympathise with families of those who committed suicide after YSR’s copter went missing.

His visit led to violent clashes and was expressly summoned to Delhi and told by AP in charge, M Veerapppa Moily, to continue his thanks-giving tour, but only in the Andhra regions. A defiant Jagan, who reportedly has turned down the offer of a Union Cabinet post, has lashed out at Chief Minister  K Rosaiah. In the coming days, he is expected to take on the CM directly and challenge the High Command to do something drastic. “If I am pushed, I will open a new front,’’ he has warned.

Lot of promises for the aam aadmi and little concrete action—that sums up the report card issued by the UPA-II Government as it completes its first year in office.

The Government may take credit for shielding the Indian economy from the global recession. But this achievement will hardly mean much to the common masses reeling under an unabated increase in prices.

Measures like the proposed Food Security Bill and Women’s Reservation Bill—two of the specially highlighted points in the report card—are still in the realm of promises alone. It is widely known how the Government sought to cheat voters when the first draft of the Food Security Bill was cleared by the Empowered Group of Ministers (EGoM). It was only when the Bill threatened to embarrass the Government that Sonia Gandhi had to intervene and the EGoM had to get down to the table once again.

Similarly, with the Women’s Bill, the Government caved in after showing political will for a while and getting it passed in the Rajya Sabha. The Bill cannot see the light of day until it is passed by the Lok Sabha, and till then, the UPA-II should desist from taking credit for it.

The Right to Education Act, on the face of it, may appear to be the only concrete thing the UPA-II can claim credit for. But here, too, when one goes deeper into the Act, the Government’s dishonesty becomes more than obvious. The cost-sharing formula that has been proposed to implement the Act is extremely burdensome for most of the states. The Centre’s insistence that states should bear 40 per cent of the cost is already being opposed by poorer states like Bihar, UP, Orissa, Madhya Pradesh and Chhattisgarh—areas where the Act is required the most. Is the Act, therefore, a mere blank shot?

It is high time the Government refrained from such bureaucratic exercises of culling together ministries’ ‘achievements’ and releasing them with pomp and show. Political acrobatics of this nature can no longer win popular applause. Telling people that all is well at a time when the Government is unable to come clean on the 2G spectrum and IPL scams only takes one back to the much amplified slogan of ‘India Shining’ coined so earnestly by the BJP six years ago. And the result is there for everyone to see.

Nitin Gadkari, the RSS’s turnkey solution to the BJP’s problems, is upset. To quote the man himself from a letter he shot off to Karnataka C M BS Yeddyurappa, he is ‘deeply disturbed’.

Gadkari is not disturbed because Jharkhand is now under President’s Rule, following a bungled move started by him to install a BJP-led government in the state. Nor is he upset that the BJP’s crisis is not yet over and the much hyped team that he formed months ago is yet to be allotted work. He is also not disturbed at the murmurs at 11 Ashok Road, the BJP’s national headquarters, that the party’s new president is a disappointment.

Rather, Gadkari is upset because someone fired an ill-aimed shot at a follower of godman Sri Sri Ravishankar at his ashram in Bangalore. A day after the firing, while the state police chief and the country’s Home Minister confirmed that the shot was neither aimed at Ravishankar and nor was he present at the time of the incident, Gadkari wrote to Yeddyurappa expressing relief that the guru had ‘escaped unhurt’. He now wants both the state and Centre to provide security to Ravishankar.

True, the BJP owes its rise to political prominence to stoking religious feelings, but when Gadkari took charge, he had promised things would be different. Writing letters to a chief minister and releasing them to the press is a propaganda ploy that party chiefs often use. Over the last few weeks, Maoists have killed scores of security personnel and civilians in massacres in Chhattisgarh, which is a BJP-ruled state. How come we haven’t heard of Gadkari writing to Chief Minister Raman Singh on securing the lives of ordinary citizens and securitymen?