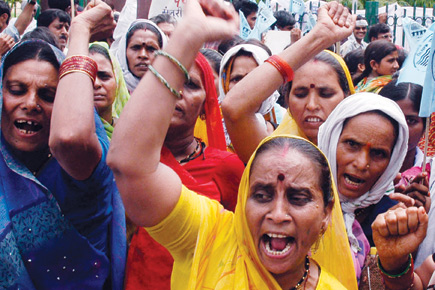 
A Chinese Takeaway in Madhya Pradesh

China has the dubious distinction of dislocating over a million people to construct the Three Gorges Dam. Now add a few more from India to the figure. The China card has unwittingly come to the aid of the BJP government in Madhya Pradesh to press for the continuation of work on the Maheshwar dam on the Narmada. The Environment Ministry under Jairam Ramesh had called for a halt to work till relief and rehabilitation is completed.

The court judgments on the Narmada project have been clear: the height of a dam is to be raised only when those affected by the raise have already been provided relief and rehabilitation. It is a simple principle and none in his right mind would argue against it. On the ground, though, relief and rehabilitation (R&R) work has remained way behind schedule though various committees of bureaucrats from  the state government have submitted reports flying in the face of facts claiming the work is done. It has mattered little whether the government in question was led by Congress’ Digvijay Singh or the BJP’s Shivraj Chouhan. In the latest bout over the dam whose construction has dragged on way beyond schedule, the Environment Ministry had noted that the R&R work was negligible.

The MP government tried a two-fold approach: compliant state correspondents fed government press notes to the national media claiming the work had been speeded up , while Chief Minister Shivraj Chouhan directly took up the matter with the Prime Minister’s Office (PMO). The plea taken was that the gates needed to be constructed in time to prevent flooding in the approaching monsoon. But if this were the case, all the government needed to do was to complete the R&R work on time.

Ramesh’s faux pas on China has left him vulnerable. On his return, he has quietly acceded to Chouhan’s request. But the clearance is categorical that the earlier order be amended ‘to the extent that only seven gates which are yet to be made functional and are under installation maybe completed’. Thankfully, the battle is not over yet, though the MP government may soon have to paper over its own inadequacies with yet another that does not remain true to the facts.

Haryana Chief Minister Bhupinder Singh Hooda may be the tallest Jat leader the Congress can flaunt in the North Indian state, but within the party, he is a follower.

The same administration that failed to protect Dalit homes from being torched and 70-year-old Tara Chand and his 18-year-old disabled daughter Suman from dying in the fire, is now doling out sops to the victims. Three of Tara Chand’s sons have been given jobs by the government. The family has received Rs 21 lakh as compensation. A permanent police post has been set up at the village and the administration has given two quintals of wheat each to 170 Dalit families. Overall, Rs 40 lakh has been distributed on the spot.

But all this hasn’t helped restore Dalits’ confidence in the establishment. And many who fled their homes after the incident are yet to return.

This can only happen in the Northeast. Troubled Manipur, or at least 60 per cent of its population living in Imphal valley, have been held to ransom for the last month by Nagas in the surrounding hill districts and their brethren in neighbouring Nagaland. These Nagas have blockaded National Highway 39—which originates in Assam and snakes through Nagaland before entering Manipur, passing through the state’s hill districts and touching Imphal—demanding the scrapping of elections to district councils in the Manipur hills and allowing NSCN-IM general secretary Thuingaleng Muivah to visit his village Somdal in Manipur.

NH 39 is Manipur’s lifeline and the blockade has resulted in acute shortage of all commodities. As a result, prices have shot up, with petrol selling for 175 a litre and an LPG cylinder for at least Rs 1,200. Medicines, including life-saving drugs, have disappeared from the valley, and relatives of critical patients are flying to Guwahati and Kolkata to purchase even antibiotics. The state government fears that foodgrain reserves will be exhausted by this week.

New Delhi, well aware of the crisis, has done little to help despite repeated SOS calls from the state government asking for Army and paramilitary escorts for thousands of goods-laden trucks stuck in the Assam-Nagaland and Assam-Manipur borders. This can easily be done since Nagaland and Manipur have a heavy presence of Army and central paramilitary forces.

However, New Delhi is afraid of rubbing Nagas the wrong way. They overwhelmingly back Muivah and his goal for ‘Nagalim’, which calls for integration of Naga-inhabited areas of Manipur, Assam and Arunachal Pradesh with Nagaland. Since New Delhi is engaged in protracted negotiations with Muivah, it feels that using force to break the blockade would invite a backlash from Nagas. It has, thus, chosen the sad and shameful option of abandoning 1.8 million residents of Imphal Valley to unimaginable and inhuman hardships.

Incidentally, NH 39 has been blockaded many times over the past decade, and every time, the residents of Imphal Valley have suffered. Is it any wonder then that the dozen-odd insurgent outfits in the valley find at least latent support from the people?

Human rights activists are livid at the Home Ministry’s latest diktat, warning that those who ‘sympathise’ with Maoists will be tried under the Unlawful Activities (Prevention) Act, 1967 (UAPA). “Any person who commits the offence of supporting such a terrorist organisation with inter alia intention to further the activities of such terrorist organisations would be liable to be punished with imprisonment for a term not exceeding 10 years or with fine or with both,” said a Home Ministry statement. In response, social activist and writer Mahashweta Devi dared Home Minister P Chidambaram to arrest her.

While it is a fact that in some cases, human rights activists have gone beyond the call of duty to hobnob with Maoists and other insurgent groups, such instances are rare. What is not rare is the Government acting against those who question various government policies or work in tribal areas—people like Binayak Sen, who was incarcerated for two years. In fact, in February this year, the Supreme Court had issued a warning to the Chhattisgarh government against labelling human rights activists as ‘Naxal sympathisers’. “First you say they are Naxals, then you say they are sympathisers, then you say they are sympathisers of sympathisers. Why do you resort to these innuendos?… Is there no concern for human or fundamental rights?” the Court had remarked.

Even if Maoists are directly contacting intellectuals, as the Government now claims, what harm could it do? Instead of raising the threat bar, the Government should encourage contacts that could possibly lead to a peaceful solution to the Maoist problem. Shooting the messenger won’t help at all.