Love the Animals, Hug the Butchers; Maharashtra’s Missing Girls; Kerala BJP Looks up to Bangalore; Return of the Mother of All Monitors; Revenge Politics 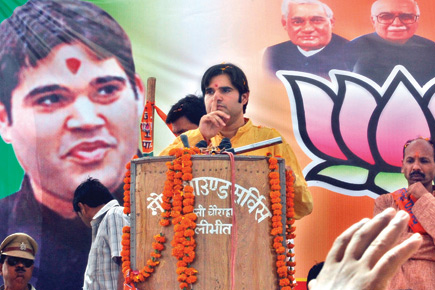 Love the Animals, Hug the Butchers; Maharashtra’s Missing Girls; Kerala BJP Looks up to Bangalore; Return of the Mother of All Monitors; Revenge Politics


Love the Animals, Hug the Butchers

Last month, Varun Gandhi became the youngest ever national secretary of the BJP. This week, he raised one of its oldest issues. At a meeting in Saharanpur, Uttar Pradesh, he bemoaned the failure of Hindus to protect their ‘mother’ and prevent gau hatya. His opponents say the question should lead him back to Sherpur village in Pilibhit. A Qureshi Muslim community of butchers is in majority here. It has a thriving abattoir and a row of leather tanneries. The trade here is controlled by a man who lives in the village’s most palatial house. The house has a salon. The salon has pictures. Some show Mecca and Medina. Others show Maneka and Varun. In one of them, Varun is seated next to Aslam Qureshi, owner of the house, member of the zila parishad, and staunch Maneka loyalist. Aslam says, with pride, “Varun used to visit us for roza iftaar every Ramzan and Eid. A thousand people would gather for the feast.” Aslam has been a close political aide of Maneka Gandhi ever since she fought her first election from Pilibhit in 1989. He did not dump her even when she joined the BJP. Not even when her son grew up, stood for election, and allegedly spewed hate against Muslims. The hate speech played on TV more often than any other during last year’s polls. But Aslam pretended it did not exist and carried on working for Varun. But Varun was smarter. As a rising star of Hindutva, he knew he could not afford a Muslim, even worse a Qureshi, hanging around. He asked Aslam to keep a distance. He did not visit Sherpur even once after the election. No roza iftaar, no Eid. Aslam does not complain. He understands the political compulsions of a young man who needed to discover an ideology to compete with his cousin: “Unki apni majbooriyaan hain. Lekin hum aaj bhi unke saath hain (He has his compulsions, but I am on his side even today).”  Maneka ‘cares’ for all animals, her son is partial to cows, but neither has interfered with the trade.

When the sex ratio declines in a better-off state such as Maharashtra, there is cause for alarm. The recently released Economic Survey of Maharashtra (2009-10) says that its sex ratio could plunge to 915 girls in 2011, from 922 girls in 2001, and domestic violence has been a major factor in this decline. Maharashtra had a strong women’s movement in the late 1970s until the mid 90s. Ahilya Rangnekar, Mrinal Gore, Dr Neelam Gorhe and many others fought for women’s rights. The end of the women’s movement in the state, say experts, and the pursuit of political ambitions by its former proponents is partly responsible for the skewed sex ratio. “The matter must be taken up as a priority,” says Neelam Gorhe, who is now a deputy leader and spokesperson for the Shiv Sena. Who will take up the issue, is the question.

Kerala BJP Looks up to Bangalore

The BJP in Kerala is looking to expand its low base by attempting to speak on behalf of the state’s traders. They are miffed with the Karnataka government for banning night-time traffic on two crucial highways that pass through Bandipur and Nagarhole  tiger reserves.

Kerala’s traders, most of them Muslims, have got little help from the government in getting the ban lifted. They even approached the Karnataka High Court, but it upheld the dusk-to-dawn ban on vehicles. Activists contend that fewer animals have been knocked down by speeding vehicles in the past eight months than in previous years. The Kerala traders contend that the highways are trade routes vital to their existence.

Spotting the political vacuum, the Kerala BJP, in a smart move this week, called on Karnataka’s BJP Chief Minister BS Yeddyurappa to try and chalk out a solution to the crisis.

“The CM has assured us that Karnataka will take a favourable stand if the Kerala government takes up the matter with the Centre or Supreme Court,’’ Kerala BJP president V Muraleedharan said, hoping to swell the party’s support in the Malabar.

Return of the Mother of All Monitors

Many may call the revival of the National Advisory Council (NAC) the rebirth of Congress President Sonia Gandhi’s ‘jholawala think-tank’. But the move certainly has the potential to break the deadlock that has arisen over the social sector promises that the party made in its election manifesto.
The most significant among the Congress’ poll promises that have become a victim of the Government’s apathy is the proposed legislation to provide food security to economically weaker sections of society. The draft Food Security Bill that the Government has cleared is being seen by many as a watered-down version of what was promised at the time of the 2009 polls.

In the draft Bill, the Government has pared down the definition of ‘food security’ to a bare minimum: that is, a legal right to buy 25 kg of wheat or rice at subsidised prices. The Bill is being criticised widely as  mere lip service and not a serious move to end hunger in the country. “The draft seems useless and must go back to the drawing board,” says developmental economist Jean Dreze, who was part of the previous NAC. Harsh Mander, a known social activist, has slammed it as “minimalist”. “It does nothing to improve people’s access to food for an active and healthy life. In fact, it actually reduces food entitlements that the Supreme Court has ordered, from 35 kg of food grains to 25 kg!” he exclaims.

So controversial has the draft Food Security Bill become that it seems to have set the stage for a prolonged and bitter tussle between the UPA Government and NGOs. One hopes that the two will reach a compromise once the revived NAC under Sonia Gandhi starts functioning.

The reconstituted NAC is also expected to keep watch on the functioning of other major social sector steps that the UPA Government took during its first term, including the Forest Rights Act and Right to Information Act.

The high point of Captain Amarinder Singh’s regime as Chief Minister of Punjab from 2002 to 2007 was, as the Patiala royal himself proudly proclaimed, putting his predecessor and Shiromani Akali Dal (SAD) chief Parkash Singh Badal behind bars for alleged corruption. Badal and his family, including son Sukhbir Badal and wife Surinder Kaur Badal,were arrested and the father and son duo spent a few days in judicial custody in the Patiala jail before they could secure bail.

When the Badals finally returned to power in 2007, they ensured that not only was Amarinder Singh booked for corruption, even his seat in the Punjab Assembly was taken away.

In an unprecedented move, the Punjab Assembly—with the majority of MLAs from the ruling SAD-BJP combine—expelled Amarinder Singh from the Assembly for his alleged involvement in a land scam in Amritsar, and declared his seat vacant. Several other corruption cases were registered against him.

The Punjab Assembly is now examining a resolution brought forward by the Speaker, Nirmal Singh Kahlon—also an accused in a corruption case—to withdraw cases that were registered as part of a political vendetta by the ruling party. The resolution itself is an admission of how the polity has been using the law to settle political scores.

Not only that, the Advocate General of the state, HS Mattewal, has informed the Speaker that the move may not be legally tenable. Once cases have been registered and prosecution initiated, it is for the courts to decide the outcome.

The resolution is not only an admission that Punjab’s lawmakers forced the executive to register cases against political rivals, but also an attempt to transgress into a territory that is the domain of the Judiciary.