CPM’s war against the media; A big blow to Naxals; University for the disabled; BJP’s Facebook face-off; and DMK’s poll booty for terrorists 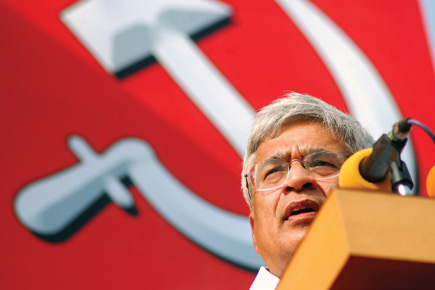 CPM’s war against the media; A big blow to Naxals; University for the disabled; and the BJP’s Facebook face-off


CPM’s War Against the Media

For a party decimated in the Lok Sabha polls, the CPM has still not learnt its lessons. Instead of setting its house in order, the party has decided to shoot the messenger. When general secretary Prakash Karat reached the state last week, he lost no time in blaming the corporate media and anti-communist forces for targeting his Kerala colleagues Pinarayi Vijayan and Kodiyeri Balakrishnan.

Pinarayi has been booked in a multi-crore scam by CBI, and Kodiyeri Balakrishnan, who is the state’s home minister, is facing allegations of protecting the killers of young entrepreneur Paul Muthoot. The media exposed how the police fabricated evidence to frame people. The media also ran stories which pointed to the police shielding Om Prakash, a confidant of Balakrishnan’s son, who was travelling with Paul when he was murdered.

Balakrishnan threatened to bring  a law making it mandatory for journalists to file details of  reports published by them at the nearest police station if  need be. He was forced to withdraw the statement but the threat still hangs in the air.

Earlier, the media opposed Pinarayi’s sidelining of Chief Minister VS Achuthanandan in the last election. The party denied a ticket to Achuthanandan, but the media forced the politburo to do a rethink. Achuthandan led the party to a comfortable win.

Attacks on the media have become common. When the Governor gave sanction to the CBI to prosecute Pinarayi in the Lavalin corruption case, newspaper offices were attacked all over the state.

As the Centre gears up for a major offensive against Naxalites, a top-ranking Naxal leader has been arrested in Delhi. Kobad Ghandy, 58, a member of the CPI (Maoist)’s Central Committee was picked up on 20 September in South Delhi. Ghandy is a big catch for the police and a huge setback for Maoists. He is in charge of party documentation and spreading Maoist influence in urban areas. He has reportedly been living in Delhi for a while.

University for the Disabled

Described as a first of its kind university in Asia, Dr Shakuntala Misra Rehabilitation University, set up by the Uttar Pradesh government, recently began its first academic session. Fifty per cent seats  are reserved for persons with a disability, of which half are in turn reserved for the visually challenged. Six courses, including a BEd course, have been introduced. Forty-five students have enrolled.

Inaugurated by CM Mayawati in Lucknow,  the university has a special education faculty with departments dedicated to the study of four categories of disabilities. Also on the cards is a research unit.

This is one race in which LK Advani is trailing behind bete noire Murli Manohar Joshi. Joshi is the new oldie from the BJP on the Facebook block. The former HRD minister has set up a fan page on the social networking site and in less than a month, the number of supporters (over 1,300) has surpassed the numbers on Advani’s two fan pages—a little over 1,200. Advani also appears to have forgotten he’s on Facebook. His last post there is from February. A downright shoddy e-job for someone who tried to emulate an Obamaesque online campaign to be prime minister. But Joshi updates regularly and interacts with fans, talking about anything from Hindutva politics to physics. He’s working hard to prove what he has been trying to do for years: what Advani can do, Joshi does better.

Tamil Nadu’s 85-year-old Chief Minister Muthuvel Karunanidhi is a master of pork-barrel politics. In the run-up to the last Assembly election in 2005, which he won, he doled out free colour TV sets to almost every household in the state, and ‘redistributed’ government land to marginal farmers. While that brand of freebie politics only cost the state’s exchequer a few thousand crore, his latest move to remit the jail term for ten convicts in the 1998 Coimbatore serial blasts, with an eye on his minority votebank, seems an open invitation to Islamist extremists to set up shop in the state. The blasts that claimed 58 lives were the state’s first brush with the hardened version of religious extremism. The jail term for these ten terrorists of the banned Al-Umma outfit ends in 2011, but they have been freed two years earlier as part of the centenary celebrations of DMK founder CN Annadurai. Kurunanidhi’s ill-devised move could help opposition leader J Jayalalithaa resurrect her flagging political fortunes.

Implementing the Sachar Committee recommendations would have been a more meaningful way to secure the support of the state’s Muslims, around 6 per cent of the population. And at a time when Home Minister P Chidambaram is talking tough on terrorism, such leniency towards convicted fundamentalists in his home state, and from the largest UPA ally, is a major embarrassment. Not surprisingly, Nalini Sriharan, an LTTE operative and a key accused in Rajiv Gandhi’s assassination, is demanding she be released on similar humanitarian grounds now that she’s spent 18 years in the Vellore jail. With Assembly elections not too far away, her chances are bright.