Is Congress putting its House in Order?; HC Judge Demoted; Trouble for BBC Anchor; Scare of the Bad Old Days; Don’t Let the Kids Chicken Out 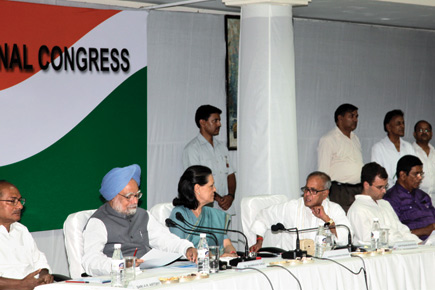 
Is Congress putting its House in Order?

Call it the Rahul Gandhi effect or the Congress’ change of heart. There are distinct signs of the grand old party gearing up to do away with its ‘nomination culture’ and restore an election culture for constituting the Congress Working Committee (CWC).

According to sources, Congress President Sonia Gandhi on 18 January held a meeting with senior party leaders, including Pranab Mukherjee, AK Antony, Ahmed Patel, Digvijay Singh and Janardan Dwivedi, and decided to form a group that would go through the party’s internal report on organisational reforms and submit its recommendations to the High Command by 25 July this year.

As per the circular issued by the Congress’ election committee chairman, Oscar Fernandes, organisational elections up to the level of Pradesh Congress Committees (PCCs) would be over by 25 July, after which the party would decide a date for the All India Congress Committee (AICC) plenary, which will constitute a fresh CWC.

For the last many years, particularly after the Tirupati plenary of the AICC in 1992, its nomination culture has dominated the party. Whenever Congress delegates were asked to assert their right to democracy within the party, they exercised it in favour of undemocratic processes and structures.  Although it is too early to say if the CWC elections will be restored in the forthcoming party plenary, sources are optimistic given the strong pitch being made by Rahul Gandhi for inner-party democracy, the holding of elections and transparency in the election and selection of leaders and office-bearers.

Sceptics, however, point out that ending the ‘nomination culture’ at the higher level of the Congress might not be easy, as many leaders close to Sonia are comfortable with the current scenario. It gives them absolute power even though they do not have any hold either over voters or their own party people.
Yet, Sonia’s move to constitute this group is no less a sign that the high command is thinking afresh on the issue.

This doesn’t happen too often. A judge of the Orissa High Court has been sent back to serve as a district judge. A full bench of the HC, headed by the acting Chief Justice IM Quddusi, took the decision to demote Justice LK Mishra and post him as district judge at Kalahandi at the end of his tenure. The reason given by the bench is that this was being done since “no recommendation for his appointment as permanent judge was received by the High Court after completion of his tenure (as additional judge)”.

An earlier enquiry conducted by the HC had recommended action against Mishra to the Supreme Court after he allegedly favoured some candidates in an examination for appointing judicial officers. While only the SC collegium can initiate action against an HC judge, Mishra’s demotion now puts him directly under the administrative control of the HC.

A BBC news anchor of Indian origin has been forced to delete her page on Facebook after a barrage of criticism following her presentation of a documentary on the 1984 Operation Blue Star at the Golden Temple. The anchor, Sonia Deol, has received many messages of abuse, mainly from Sikhs angry at Jarnail Singh Bhindranwale, the Khalistani separatist leader killed in the Army action, being termed a ‘militant’. The BBC has reportedly received over 50 written complaints and 8,000 calls, calling the documentary one-sided.

Incidentally, Deol, who hosts BBC Breakfast on weekends and News 24 bulletins, is to replace Nikki Bedi on a show the latter has hosted for six years. Bedi had run into a row in 1995 when on a show for Star TV,  a guest had passed derogatory remarks about Mahatma Gandhi.

Scare of the Bad Old Days

A recent spurt in terror attacks in Kashmir has left the people worried about what they fear could be a return of the bad old days. There have been seven gunfights in a fortnight already in the Valley, and on 19 January, many policemen were injured in a landmine blast in south Kashmir, including Inspector Javid Ahmed, featured in Open’s cover story last week.

There have been many infiltration bids recently from the Pakistani side for letting terrorists cross over to this side. According to India’s Chief of Army Staff General Deepak Kapoor, there are about 700 terrorists waiting to sneak across the Line of Control. Even the Union Defence Minister has pointed towards the possibility of increased terrorist activity in Kashmir. “The incidents of the first week of January in the Valley are indicative of the shape of things to come,” he said recently.

More worrying is the fact that a number of local Kashmiris may have joined militancy, and are prepared to be used by their handlers in Pakistan any which way. In the fidayeen attack at Lal Chowk in the first week of January—the first in two years—one of the attackers, who later died in police action, was a local boy from north Kashmir’s Sopore which is emerging as a hub of terrorist activities.

It has been with utmost difficulty, and after a lot of sacrifices that the security forces, notably the J&K Police, have been able to rein in militancy in Kashmir. Local Kashmiris are already reeling under a lot of difficulties, including the dwindling of tourists immediately after attacks such as the one at Lal Chowk.
The coming tourist season is really important for keeping hearths burning in the Valley. Sure, there will always be sporadic pro-freedom sloganeering and stone-pelting in many areas. But what New Delhi needs to make sure is that the Valley does not return to the days when Lal Chowk would be left deserted after sunset. Whatever it takes, the absence of gunfire in people’s lives should be permanent.

Don’t Let the Kids Chicken Out

The spate of suicides in Maharashtra, with twenty students in different age groups killing themselves within a month, has anguished parents and revealed the rot in the way teaching is conducted in this country.

Reasons for suicide have ranged from scoldings for bunking class to poor academic performance. However, the root of the problem is that student-teacher and child-parent communication is simply non-existent in most cases.

A whole generation thus is growing adrift, both in the school years and early career. According to the National Crime Records Bureau, Ministry of Home Affairs, the majority of suicides (37.8 per cent) in India are by those below the age of 30. Schools are not just about imparting education. They also need to address emotional well-being, something schools are not doing. There is, of course, an underlying economic reason for this. There are just too many students and too few teachers. The ideal student-teacher ratio, according to various studies, is one teacher to an average of 20 to 25 students. In India, it is not exceptional to have a 1:40 ratio. This  hampers individual attention and the interactions a teacher can have with students in a class. This leads to isolation and peer pressure and tragically even to suicides.

Schools would do well to initiate greater interaction through separate classes just for that purpose. Education science has evolved over the years. Alas, the will to implement that knowledge hasn’t. On their part, parents must bring up their children with realistic goals and ambitions, otherwise young lives will needlessly, and sadly, continue to be lost.